In a previous posting, we talked about Saruman as a kind of imitation Sauron and Isengard as a mini-Mordor. 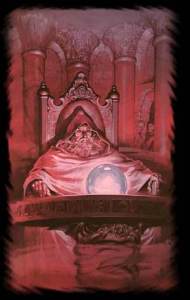 In this posting, we want to consider the implications of Gandalf’s remark about him in “Many Partings”, from The Return of the King: “I fancy he could do some mischief still in a small mean way.”

The mischief, when we see it, is definitely mean, but not small, even though confined to the limits of the Shire.

The world of The Lord of the Rings is a pre-industrial one. The most advanced technology, on the one hand, is the palantir (actually perhaps a magical, rather than mechanical, device) 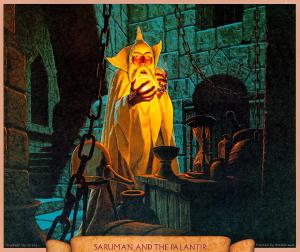 and , on the other hand, a watermill. 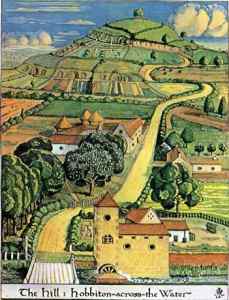 Beyond that, it’s a medieval world, but without, it seems, feudalism, although there are, for example, castles and knights in the form of the Prince of Dol Amroth.

We can easily see why JRRT wanted this regression. On the one hand, like so many boys of his age, he had grown up reading Tennyson 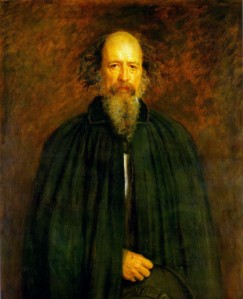 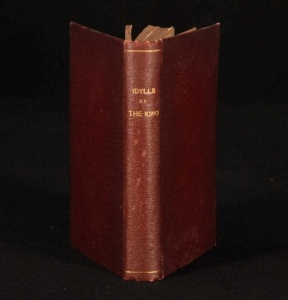 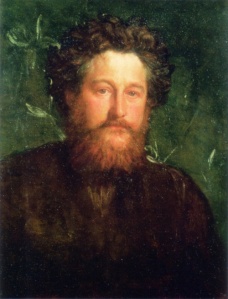 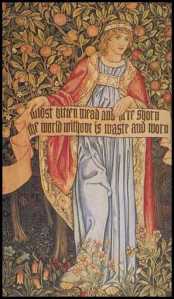 who had created a world of Victorian medievalism, Tennyson in poetry, Morris in many different art forms.

On the other, Tolkien had grown up in Birmingham, in the English Midlands, where there had been massive development throughout the era of the Industrial Revolution. 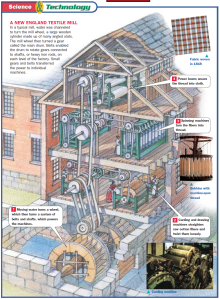 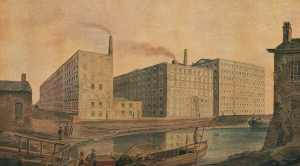 Here’s Charles Dickens’ description of such a place from Hard Times (1856):

Needless to say, although Tolkien kept a strong affection for King Edward School, where he was educated before Oxford, 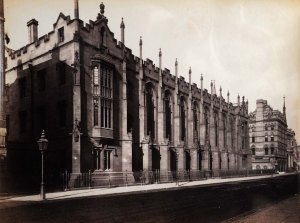 he was less enthusiastic about the industrial world which surrounded it and this clearly colors his picture of Saruman. Look, for instance, at Fangorn’s description of him:

“He has a mind of metals and wheels; and he does not care for growing things, except as far as they serve him for the moment.” (The Two Towers, Book 1, Chapter 4, “Treebeard”) (It’s revealing, by the way that this is almost a quotation of something which Saruman later says of Gandalf, “When his tools have done their task he drops them.” The Return of the King, Book 2, Chapter 8, “The Scouring of the Shire”)

Saruman, then, with his metal mind, has turned the once-beautiful Isengard 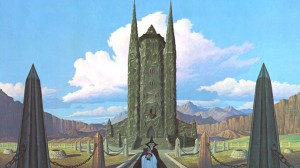 into an arms factory 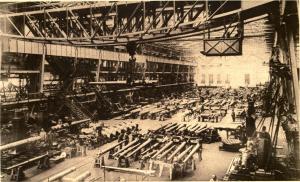 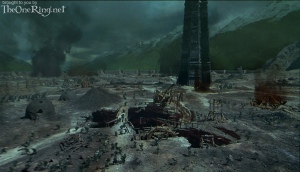 and has angered the Ents, as well, by the wanton destruction of trees, not just for fuel, it appears, but just out of sheer spitefulness. 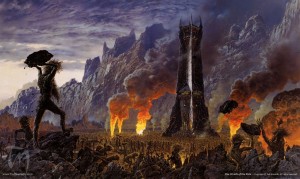 As we wrote earlier, all of this has remade Isengard into a mini-Mordor—as Frodo says: “Yes, this is Mordor…just one of its works. Saruman was doing its work all the time, even when he thought he was working for himself.” (The Return of the King, Book 2, Chapter 8, “The Scouring of the Shire”)

So, when Saruman, Grima in tow, leaves his ruined factory, one could almost imagine just what he might have in mind when he says to the hobbits:

“Well, it will serve you right when you come home, if you find things less good in the Southfarthing than you would like.” (The Return of the King, Book 2, Chapter 6, “Many Partings”)

We know from Merry and Pippin’s experience at the gate of Isengard that Saruman has been importing pipe-weed, a main export of the Southfarthing. 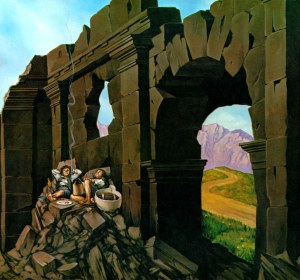 But when the hobbits, having forced the gate at the Brandywine, are making their way towards Hobbiton, they begin to have a feeling that much more has been damaged than the South Farthing: “Still there seemed an unusual amount of burning going on, and smoke rose from many points round about. A great cloud of it was going up far away in the direction of the Woody End.” (The Return of the King, Book 2, Chapter 8, “The Scouring of the Shire”)

This smoke bears an ominous resemblance to the Midlands (and, in fact, to all of industrial England): 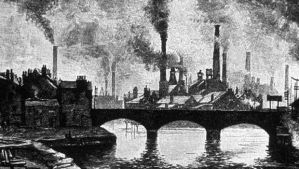 There is worse to come, however: Bywater. “Many of the houses that they had known were missing. Some seemed to have been burned down. The pleasant row of old hobbit-holes in the bank on the north side of the Pool were deserted, and their little gardens that used to run down bright to the water’s edge were rank with weeds. Worse, there was a whole line of ugly new houses all along the Pool Side, where the Hobbiton Road ran close to the bank. An avenue of trees had stood there. They were all gone. And looking with dismay up the road towards Bag End they saw a tall chimney of brick in the distance. It was pouring out black smoke into the evening air.” (The Return of the King, Book 2, Chapter 8, “The Scouring of the Shire”) 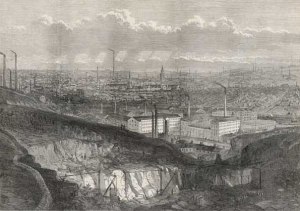 Saruman’s revenge has been more than small and mean, especially in terms of the industrial world which The Lord of the Rings rejects: the Shire is on its way to becoming another Midlands, 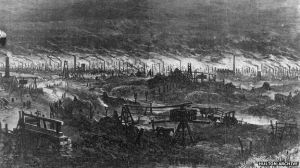 even to the workers’ miserable housing. 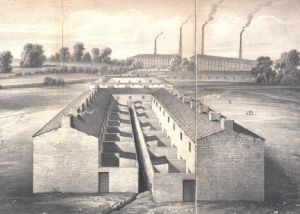 And the cutting down of trees (including, as we will find out, the Party Tree) insures the truth of Saruman’s sneering statement to the hobbits:

“…I have done much that you will find it hard to mend or undo in your lives.” (The Return of the King, Book 2, Chapter 8, “The Scouring of the Shire”)

But, as we know, Saruman, even in his moment of triumph, has no more than a moment to enjoy it. He is murdered by Grima and here we see the final irony. As Saruman has turned the medieval, bucolic Shire into a smoky horror, so he himself is turned to smoke:

“To the dismay of those that stood by, about the body of Saruman a grey mist gathered, and rising slowly to a great height like smoke from a fire, as a pale shrouded figure it loomed over the Hill. For a moment it wavered, looking to the West; but out of the West came a cold wind, and it bent away, and with a sigh dissolved into nothing.” (The Return of the King, Book 2, Chapter 8, “The Scouring of the Shire”) 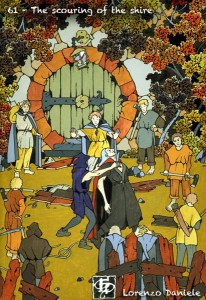 A final thought, however. Might we see Saruman’s gesture towards the West, in which he clearly feels that he has been rejected by that which sent him to Middle Earth, as a mirror Galadriel’s gesture of rejection towards the East, when she refuses the Ring?

“She lifted up her hand and from the ring that she wore there issued a great light that illuminated her alone and left all else dark. She stood before Frodo seeming now tall beyond measurement, and beautiful beyond enduring, terrible and worshipful. Then she let her hand fall, and the light faded, and suddenly she laughed again, and lo! she was shrunken: a slender elf-woman, clad in simple white, whose gentle voice was soft and sad.” (The Fellowship of the Ring, Book 2, Chapter 7, “The Mirror of Galadriel”) 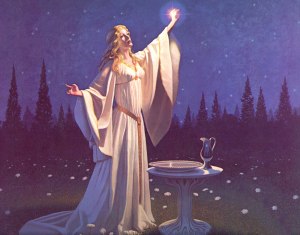