Zombies from all parts of the island
Some of them were great calypsonians.
Since the season was carnival,
They got together in bacchanal
HUH! And they were singing:

What in the world are we doing, dear readers? Are we about to launch into a posting about The Walking Dead?

Well, no. Unless we mean the “walking-again dead”, which we do. And how did we get here?

It all began with our last two postings, on see-ers—that is, seers–and so many different ways of telling the future, like oneiromancy (dream interpretation) and cleromancy (using numbers), but, among them, we think the most sinister is necromancy—and this brought it to mind:

“Some here will remember that many years ago I myself dared to pass the doors of the Necromancer in Dol Guldur, and secretly explored his ways and found thus our fears were true: he was none other than Sauron, our Enemy of old, at length taking shape and power again.” (The Fellowship of the Ring, Book Two, Chapter 2, “The Council of Elrond”)

This is Gandalf recounting his adventure in Isengard. What he’s relating here happened somewhat before the action in The Hobbit, followed by the White Council’s attack on Dol Guldur (“The Hill of Dark Sorcery”), in the southern part of Mirkwood. 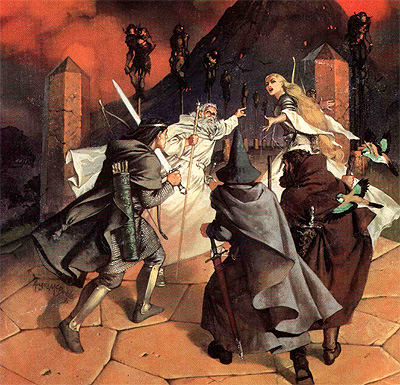 That was parallel in time to the travels of Bilbo and the dwarves towards the Lonely Mountain.

Here’s how John Howe thought Dol Guldur might have looked.

And here’s how it appears in The Hobbit films

although why it’s a ruin is unclear—Gandalf has said above that Sauron is “taking shape and power again”, and so we would imagine that, just as he’s reconstituting himself, there’s been a rebuilding campaign at his headquarters in the forest. So, rather like Howe, we see the place as more imposing, perhaps like Bran castle, in Romania, which is advertised as “Dracula’s castle” in tourist literature. 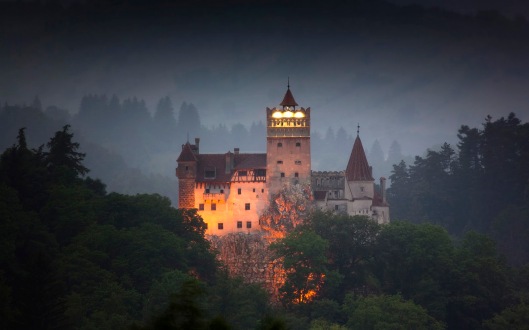 The process of questioning the dead goes back a long way in western literature. In the Odyssey, Circe, 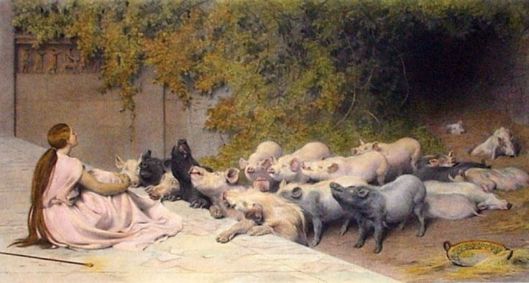 who once turned part of Odysseus’ crew into pigs, tells him that, before he can go home, he must sail south, to the Otherworld, to consult Teiresias, who is a seer (see our last two postings for more on people like this) 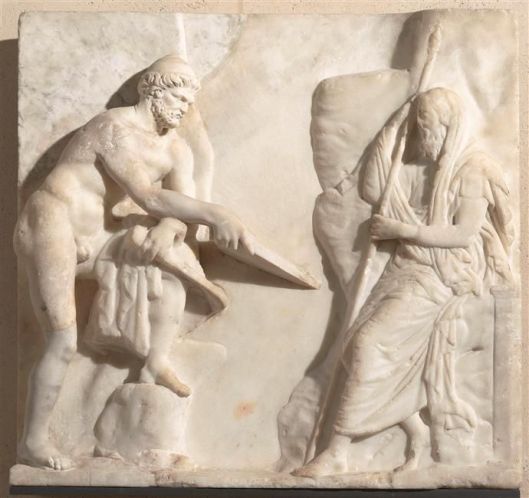 for current information about his home on Ithaca and for coaching about his future behavior. To deal with the dead, Circe tells Odysseus in detail how to make a kind of drink offering of animal blood in a pit.

Then, because all of the dead will be drawn to the blood (we’re back to Dracula here, aren’t we?), he is to draw his sword and stand over the pit, only allowing those he would question to sip the blood.

But why would a sword threaten ghosts? one might ask. We think that the answer is that it’s iron and iron, in folklore, is a protection against evil magic. Odysseus has used his sword earlier to threaten Circe, who is a very powerful sorceress. See this LINK for more. 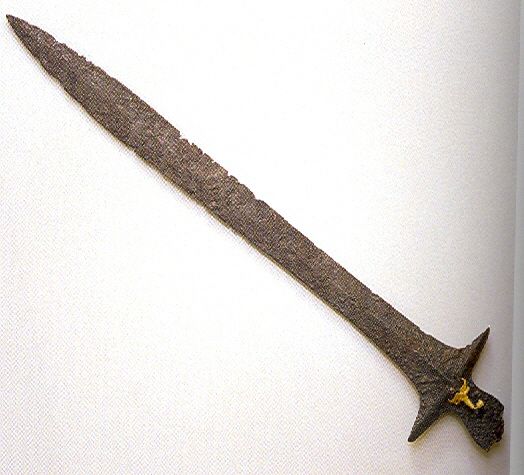 Odysseus is successful in his quest, but King Saul, in First Samuel, in the Hebrew Bible, who has already banished necromancers and magicians from his kingdom, is not. Saul is anxious about a battle to come and, when he is not answered via prayers and cleromancy about its outcome, he consults a kind of witch, who may (scholars argue over this) produce the spirit of the prophet Samuel. 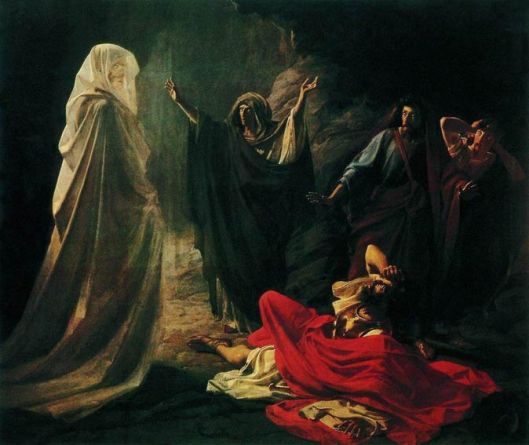 When Samuel appears, his response to Saul is not what Saul had hoped for. Instead, Samuel scolds Saul and gives him a fortune-telling he’d rather not hear, that he will lose the battle, his army, and his life the next day, all of which comes true.

Saul had hoped that he could make Samuel do his bidding, which was less than successful, but what if one might make the dead one’s slaves? This is where our opening comes in. The tradition of zombies is complex, including the word itself. At the moment, the earliest reference to the word in English is found in 1819, in volume 3 of the poet, Robert Southey’s (1774-1843), 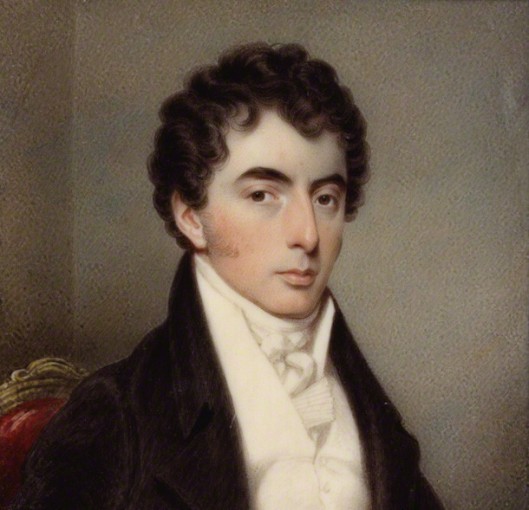 They were under the government of an elective Chief, who was chosen for his justice as well as his valour, and held the office for life : all men of experience and good repute had access to him as counsellors : he was obeyed with perfect loyalty; and it is said that no conspiracies or struggles for power had ever been known among them. Perhaps a feeling of religion contributed to this obedience ; for Zombi, the title whereby he was called, is the name for the Deity, in the Angolan tongue.”

The subsequent history of zombies is complex, but a recurrent theme is that they are the dead, brought back to serve the living, usually by an evil magician, called a bokor. Among the possible tasks for such a slave is telling the future, thus making a bokor a necromancer, like Sauron.

We’ve done an extensive image search under “zombie” and the weirdest things turn up, none of which we would put into a posting, so this is the best we can do.

If, however, this is the best a bokor can manage, we can’t imagine what news of the future one of these zombies might possibly give Sauron—and it’s no wonder that he loses the Ring.

But thanks for reading!

If you’d like to see “Zombie Jamboree” performed, here’s a LINK to our favorite version, by Rockapella.

Although there are no temples or shrines to him (the closest thing is perhaps the Stone Table),

is clearly someone with divine powers and his influence is felt directly and indirectly throughout all of the Narnia books.

JRRT once said that Middle-earth had a monotheistic religion, but the traces, as has been written about more than once, are almost invisible.

There are no ziggurats, 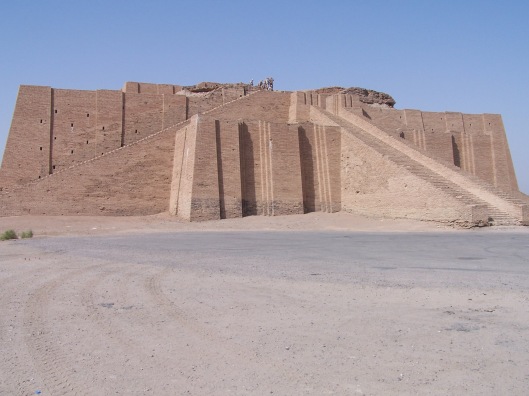 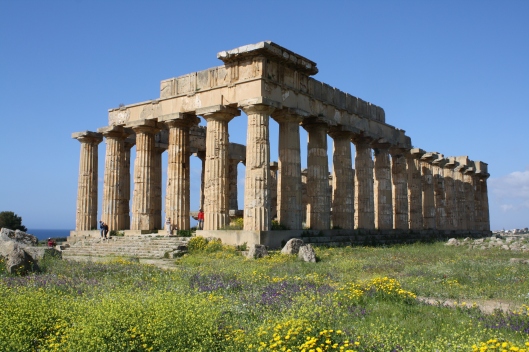 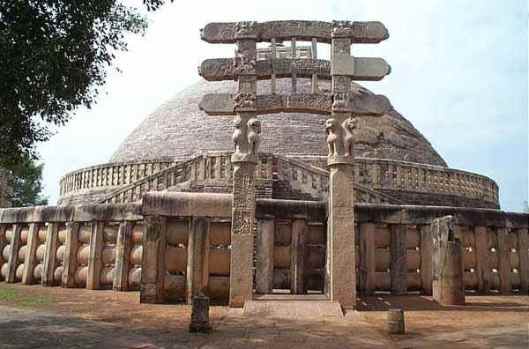 no heroa (shrines for demi-gods or heroes). 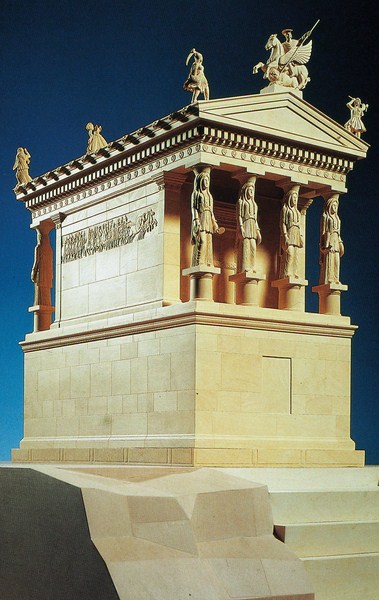 The Valar are mentioned once (some of Faramir’s men call on them to protect them from a mumak), of course, and there is that ceremony of standing and looking west before a meal.

That idea of looking west has long interested us, mainly because, in much of western tradition before the Age of Exploration, the west was looked upon as a place of uncertainty, if not outright fear.

Although Odysseus, in Odyssey 9, is careful to point out that his home island, Ithaka, lies farthest towards dusk in its island group, in Odyssey 11, in the far west lies the Land of the Dead, 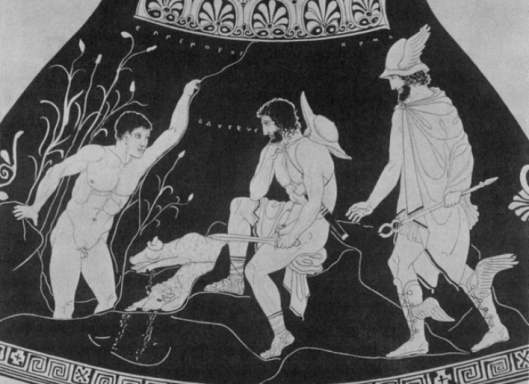 to which Odysseus sails

to consult the seer, Tireisias,

on the way to get home. This is, then, hardly a choice direction in which to sail, for all that Tireisias does provide some guidance.

The same is true for a series of stories about immrama, “voyages” (literally “rowings around”) in Old Irish, not only secular stories, like those of Mael Duin

but a famous religious one about Saint Brendan. 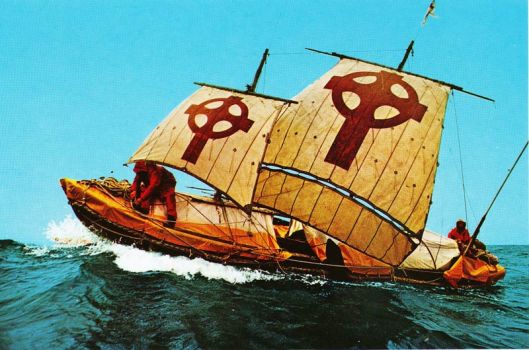 In each of these stories, sailing westward commonly means sailing rather haphazardly among sea monsters and islands with strange people or creatures. There is also the possibility of time distortion: the voyager believes himself gone in terms of a few years, at most, when, instead, he may have been gone for much longer (as in Washington Irving’s short story, “Rip Van Winkle”, in which Rip, falling asleep in the Catskill Mountains after drinking with the ghosts of the crew of the explorer Henrik Hudson’s ship The Half Moon, thinks that he has been gone only overnight when, instead, he’s been gone for twenty years.) 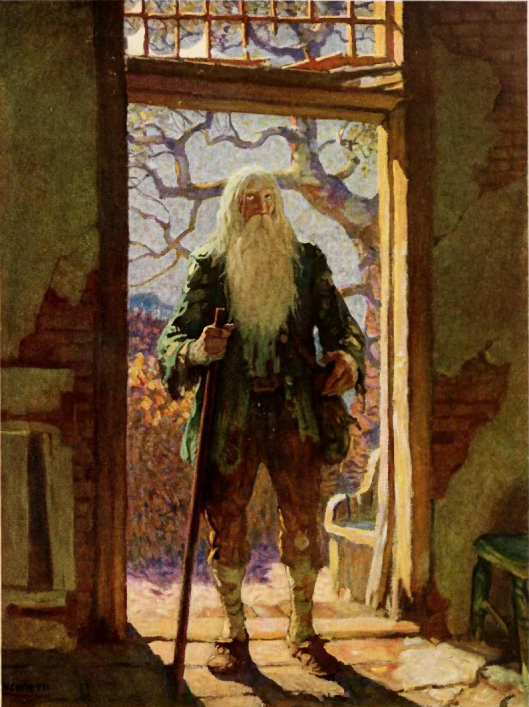 (by one of our all-time favorite illustrators, N.C. Wyeth, from his Rip Van Winkle, 1921—the whole work is available, with all of its wonderful illustrations, to download for free at the Internet Archive, may their beards grow long!)

“To go west”, probably based upon the idea of the sinking sun, as an older English expression has the meaning of “to die/to fail catastrophically” (now people in the US seem to be replacing it with “to go south”, which has none of the older resonance, unfortunately), but it ties in very nicely with these older beliefs about what lies west of Europe, so full of danger and mystery.

But then we come back to that looking west.

In the belief system of Middle-earth, westward across the sea lies the continent of Aman, and on that continent is Valinor, home of the Valar, those powerful and immortal beings who are perhaps to be likened to the archangels of Christian belief—with a bit of patron saint and even Norse and Greco-Roman pantheons thrown in. (We admit to having a very shallow knowledge of Arda theology, being less interested in the finer points of belief than in the adventures and the cultures and the languages of Middle-earth.)

The Istari, the five wizards are from there and it’s for us one of the most melancholy moments when, after his murder by Grima, it is clear that Saruman is denied a return.

Gandalf, however, is permitted to return, as are Bilbo and Frodo (and, in time, Sam, apparently), all part of the defeat and disembodiment of Sauron. 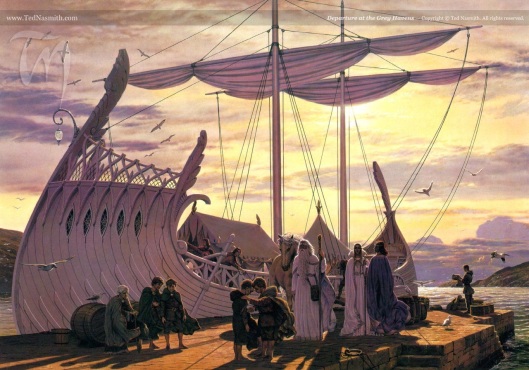 The elves are also allowed to make the voyage to Aman, although they have their own separate place there, and, when Gandalf leaves, so do Galadriel, Celeborn, and Elrond, part of a slow general leave-taking of the Elves.

No human is admitted however, to the Undying Lands, as they are called, and it occurred to us that perhaps, in that fact, the mortals of Middle-earth are closer to Saruman than to Gandalf or the Elves:

“To the dismay of those that stood by, about the body of Saruman a grey mist gathered, and rising slowly to a great height like smoke from a fire, as a pale, shrouded figure it loomed over the Hill. For a moment it wavered, looking to the West; but out of the West came a cold wind, and it bent away, and with a sigh dissolved into nothing.” (The Return of the King, Book 6, Chapter 8, “The Scouring of the Shire”)

Could that ceremony of looking westward also be done with a sigh, an acknowledgement that there are no undying lands for them?

This, for us, is a rather historical posting, being our Number 100. By earlier September, we will have reached 104, making exactly two years since we began our blog. We thank you for reading, hope that you will continue to do so, that you will share our work among your friends and that, in the future, you will be willing to share your thoughts with us, as we always encourage you to do.