JRRT always actively denied that his work was allegorical, that somehow, for example, he meant Sauron to stand for Hitler (and why not Stalin?) and the Ring was the atomic bomb. In a draft of a letter from April, 1959, he wrote:

“I have no didactic purpose, and no allegorical intent. (I do not like allegory properly so called: most readers appear to confuse it with significance or applicability…” (Letters, 297-298)

Well, someone born in 1892, who lived through everything from the Boer War (1899-1902) to the Great War (1914-1918) to the Second World War (1939-1945) and into the middle of the Cold War, with all of the proxy wars and wars for independence during the 1940s to 1970s, could not help being somehow at least affected by such large and dreadful events, particularly a man as sensitive and thoughtful as JRRT, and as historically-minded. Like it or not, Tolkien was entangled in contemporary history.

One way that this has struck us recently is rereading Letters and coming across this:

“There is only one bright spot and that is the growing habit of disgruntled men of dynamiting factories and power-stations; I hope that, encouraged now as ‘patriotism’, may remain a habit! But it won’t do any good, if it is not universal.” (JRRT to Christopher, 29 Nov 1943, Letters, 64)

Looking at that date, it is clear that what he is referring to is, in fact, the Allied bombing campaigns against the Reich (and as his son was training in the RAF—Royal Air Force—at the time, perhaps some part of him was also dreading that Christopher might be part of future bombing runs. After all, a general consensus is that the RAF lost over 50,000 killed in its war against Germany. This is, of course, small in contrast to the 60,000 casualties incurred by the British Army on the first day of the Somme, 1 July, 1916, alone, but, with warfare having become much more mobile again in 1939-1945, these were significant losses.)

Here are, in fact, photos of the bombing of a German factory and a power station—the very sort of thing Tolkien is describing. 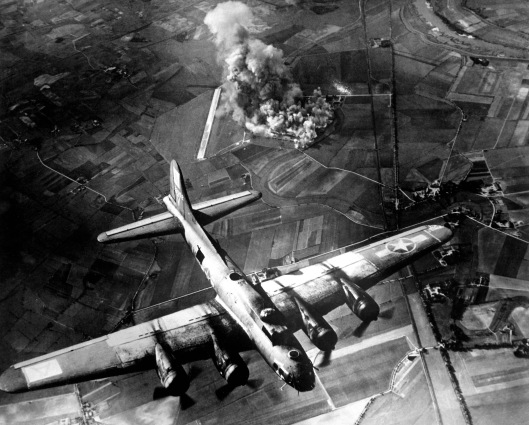 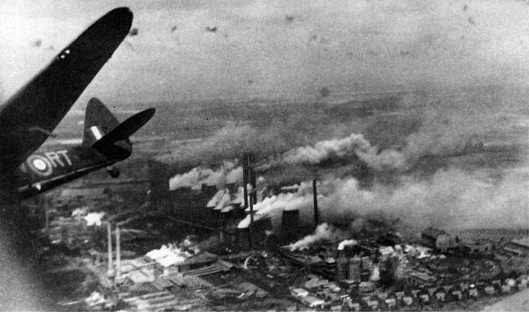 (Although, for the sake of our posting, we feel that it’s necessary to show illustrations like these, it’s hard for us to do so. In those smoke clouds are the lives of men, women, and children, with all of the loss and misery which war always brings. Yoda says, “Wars not make one great” and, when we think of the human cost, it’s hard for us to disagree. We only wish that all the violence in history was confined to adventure stories and that, in real life, people got along and there was no need ever for such awful behavior against fellow human beings.)

But why does Tolkien describe current events in such an odd way, in which the pilots of the British and US Air Forces are “disgruntled men” and their bombing raids are depicted as “the growing habit…of dynamiting factories and power-stations”? We would say that it’s because he is, in a way, turning current history around and looking at the past through it metaphorically.

Anarchy, being about resistance to organized state control, has a very long history, both east and west. What JRRT is alluding to here is, rather, the late-19th, early 20th-century cartoon version of it— 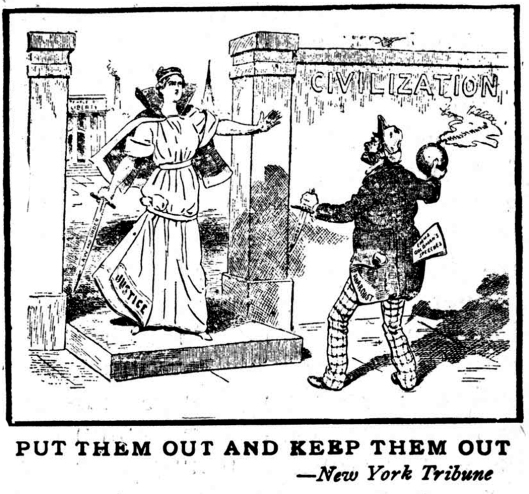 The real anarchists were deadly (pun intended) serious people, whose goal it was to criticize what they saw as the increasingly-intrusive top-down rule of the state and to suggest (and sometimes fight for) alternatives based upon loose associations of equals. If you know Monty Python’s Holy Grail, you’ll remember the scene in which King Arthur confronts someone who sounds at least like a Marxist, if not a full-fledged anarchist. (King Arthur and the Annoying Peasant from “Monty Python and the Holy Grail”) A central portion of the text includes this:

“WOMAN: I didn’t know we had a king. I thought that we were an autonomous collective.”

DENNIS: You’re fooling yourself. We’re living in a dictatorship…A self-perpetuating autocracy in which the working classes…”

Tolkien goes on to complain of what he believed was the growth and increasing facelessness of government, what he called the “Theyocracy” (63), but it’s clear from the later remark quoted above that what particularly disturbed him was the way in which he believed the state was involved in the ongoing Industrial Revolution, hence the focus upon “dynamiting factories and power-stations”.

JRRT’s objections to the ruination, as he saw it, of the world of his childhood run through all of his writings, but what we always think of first is its proxy version in “The Scouring of the Shire”, with its Saruman/Sharkey boss and everything from the wanton destruction of trees and the collectivization of the population to the building of what appear to be proto-factories. 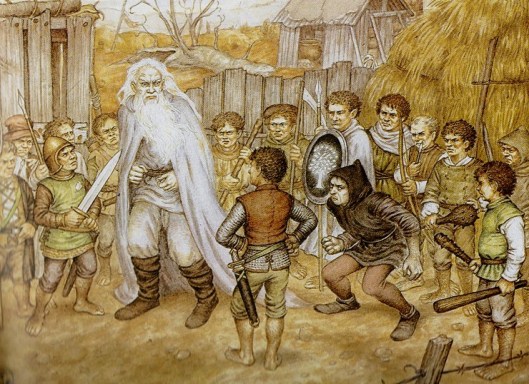 And his reaction reminds us immediately of an earlier reaction to industrialization, not for aesthetic or political reasons, but for economic, that movement in early 19th-century England called “the Luddites”. The name comes from, well, there are a number of explanations, none of them being particularly believable. We know, however, that it was a secret movement of very loosely-organized groups of cloth workers, but not one large body with complex plans to overthrow the system. Perhaps as a mockery of the perception that they were such a large body, they, over time, created a mysterious “General Ludd” or even “King Ludd” to suggest that that body not only existed, but had a sinister leader. 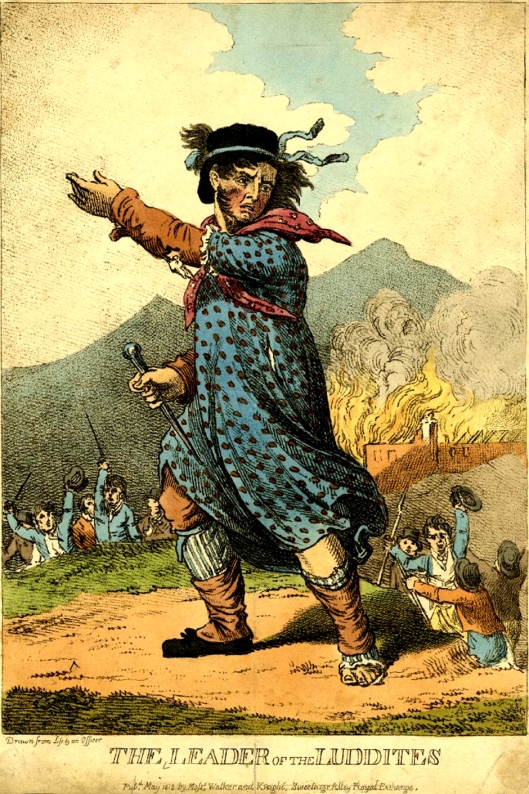 The Luddites were made up of various segments of the traditional cloth-making industries who saw their livelihoods—and even their relative freedom—being destroyed by the introduction of large, water-powered mills filled with machinery which could do their jobs not only faster, but, as machines have no need for rest, also at a production level no human could ever match. Even if the workers kept to their trades, then, the mills and their output would simply swamp them. 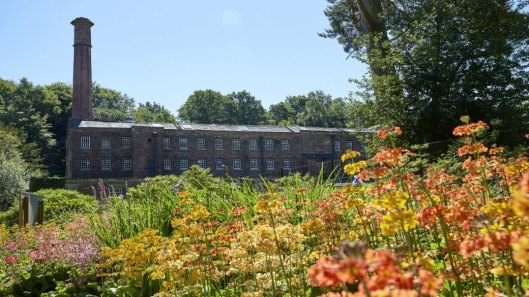 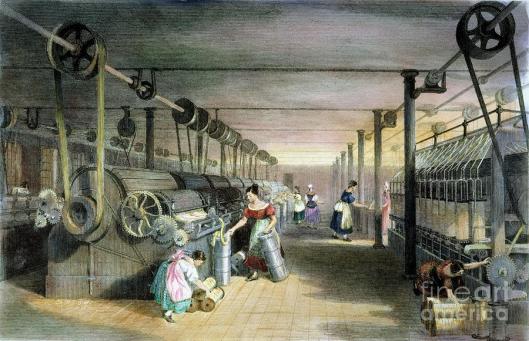 This was also the time of the beginning of the Labo(u)r Movement in Britain and the government (not surprisingly, considering where the economic influences upon it might come from) had already begun to try to block it with the Combination Acts of 1799 and 1800, which placed severe penalties on workers attempting to form unions, or “combinations”.

When people tried simply to hold peaceful public meetings, the local authorities felt so threatened that they turned soldiers on the demonstrators, as here in Manchester, in August, 1819. 11 demonstrators were killed and several hundred were injured. 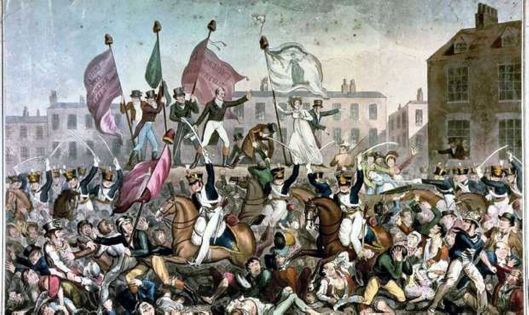 So much for peaceful demonstrations. The Luddites, seeing the attitude of the government, began to attack the mills and warehouses, as these posters show— 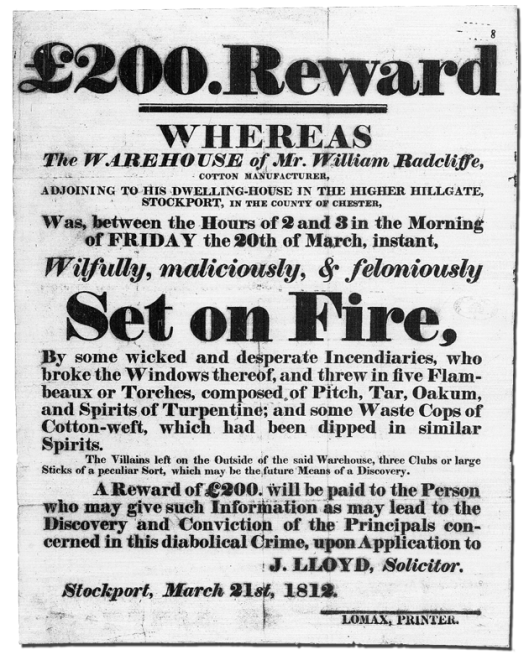 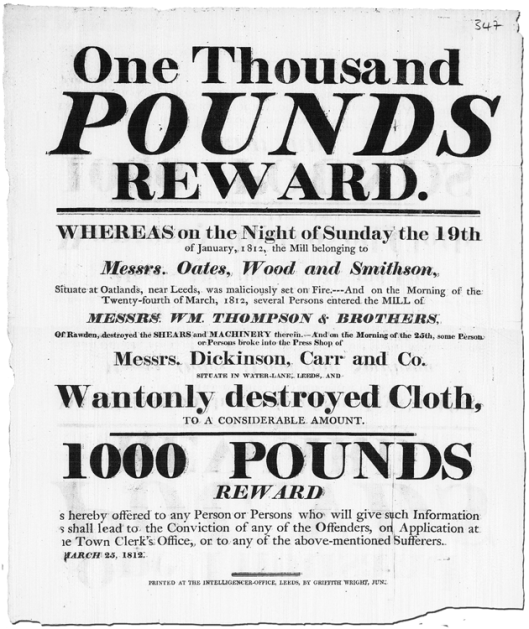 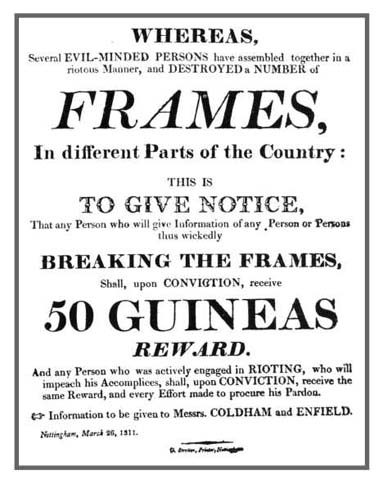 as well as the machines themselves. 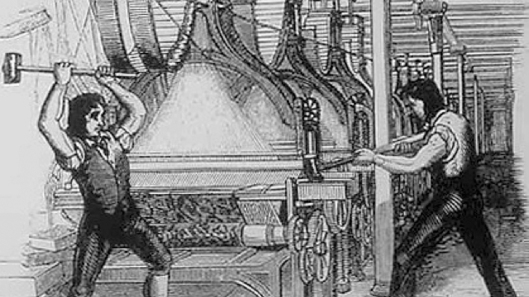 Faced with the government, its laws, and its enforcement—which could even mean executing people, as was done at York in 1813— 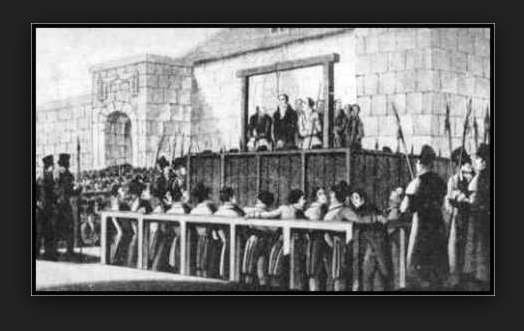 the Luddites were a short-lived movement and had disappeared by about 1816.

Their idea about turning back the effects of the Industrial Revolution by violent means—at least in fantasy—however, clearly was still available, at least to JRRT in 1943.