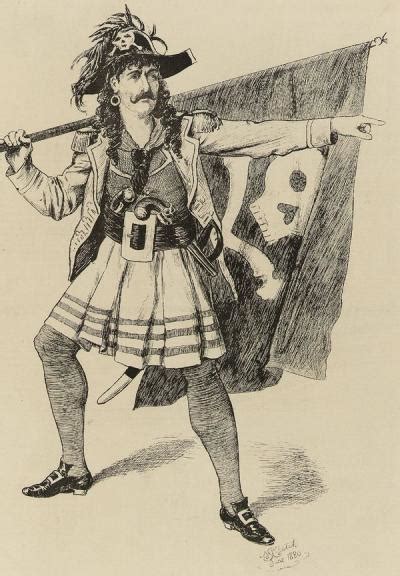 A henchman was originally a hengestman, from hengest “horse/stallion” + man “man”—in other words, a groom, a servant who takes care of horses.

Although the word began with the meaning of “groom”, it has certainly changed over time and now it suggests something like “ thuggish follower”—like these gangster henchmen.

The word minion comes from the Old French word mignon, “a (little) darling”, but its meaning has also changed–even more than henchmen, now indicating a kind of low-level person who simply follows orders, which the peasants in this picture by Albrecht Duerer make us think of.

These words originally came to mind while we were watching the first episode of Neil Oliver’s excellent BBC series A History of Scotland. (Smart writing and wonderful photography.)

faces off against a Pictish druid.

(This is the closest we can come to an image of a druid. As far as we know, there are, in fact, no surviving images of the learned class of the Celtic world, just often very imaginative illustrations with little or no factual basis.)

In Adomnan’s (c.624-704AD) Life of Columba, Book II, Chapter XXXIV, Columba struggles to free a slave being held by the druid, Broichan.

The saint wins, of course, but what struck us about this story—and in this DVD depiction—was that it was a one-on-one contest: neither man called upon backup—something which one might especially expect from the antagonist of the story, as in so many. After all, we thought, just think of villains in all kinds of stories—

The Sheriff of Nottingham has his henchmen ready to try to capture Robin Hood at the famous archery contest.

Or, if you prefer—

to fight the musketeers

in Alexandre Dumas’ The Three Musketeers.

The Wicked Witch of the West

has two sets of henchmen: the flying monkeys

which have been the terror of many childhoods, in our experience, and the Winkie Guards,

whose drum beat and deep chant always made us a little nervous when we were little (not to mention their skin color and odd noses).

Here’s a LINK, in case you’ve forgotten what they were like.

In a more modern story, the Separatists have so many droids,

as Emperor Palpatine has so many stormtroopers.

And, of course, Saruman

has so many orcs

as, along with all of his human minions, does Sauron.

We can imagine several reasons for such overwhelming force in these stories. For the protagonist/s, the more of the enemy there are, the more impressive their defeat, as when Odysseus faces so many suitors (over a hundred) with only his son, Telemachus, and a couple of servants to help him.

(And Athena, of course!)

For the antagonist/s, there is the sense that they are so powerful that they have only to command and vast numbers of henchmen will do their bidding.

At the same time, we wonder if, underneath all of that force, there is a basic insecurity, a feeling that “my power by itself is really not enough—I can’t do this alone”? After all, it’s not the Sheriff of Nottingham who faces Robin Hood in the 1938 film,

but the secondary character, Guy of Gisborne (played by Basil Rathbone, who was the first great film Sherlock Holmes).

The Wicked Witch of the West relies upon her monkeys and her guards and Saruman and Sauron upon their armies and none ever faces an opponent alone: for that matter, we never even see Sauron except as a shadow at his fall.

And perhaps that underlying insecurity has some roots in reality: the only antagonist who actually confronts the protagonist is a little too sure of himself and of his major henchman and we all know what happens next…