After the last couple of postings, full of war, this is a rather peaceful one. We want to put forward a scheme for a larger project, all about orality versus literacy in Middle Earth, of which this is one small step, our initial question for the project being, “What is written and how and what is only spoken and remembered?”

Early in Chapter 9 of The Fellowship of the Ring (“At the Sign of the Prancing Pony”), we encounter this passage:

“For Bree stood at an old meeting of ways; another ancient road crossed the East Road just outside the dike at the western end of the village, and in former days Men and other folk of various sorts had travelled much on it. Strange as News from Bree was still a saying in the East Farthing, descending from those days, when news from North, South, and East could be heard in the inn, and when the Shire-hobbits used to go more often to hear it.”

Bree, of course, is the little town to which Frodo and his companions travel once they have gotten free of the Barrow Downs. 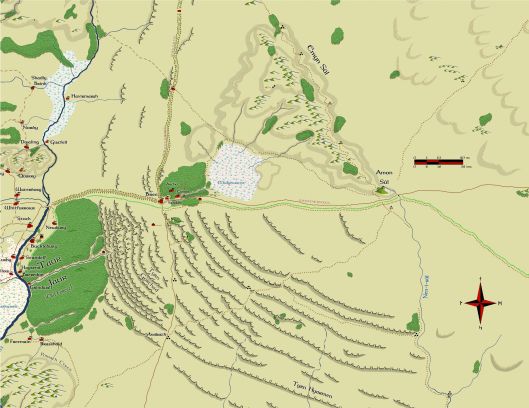 The little town is described as being surrounded by a dike—a wide ditch, the inner side topped with a thick hedge—perhaps something like this— 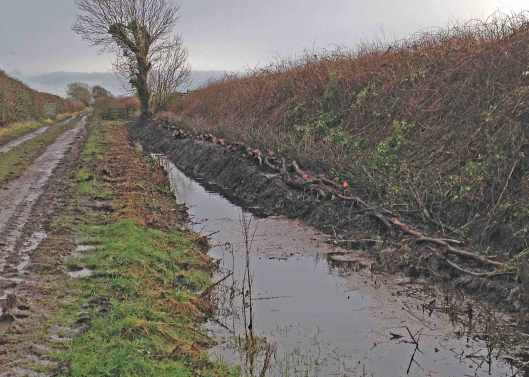 And consisting of “some hundred stone houses of the Big Folk, mostly above the Road…”. Without knowing the kind of stone, we have imagined it as looking rather like Haworth, in Yorkshire, the home of the Bronte family (without the modern touristy stuff, of course). 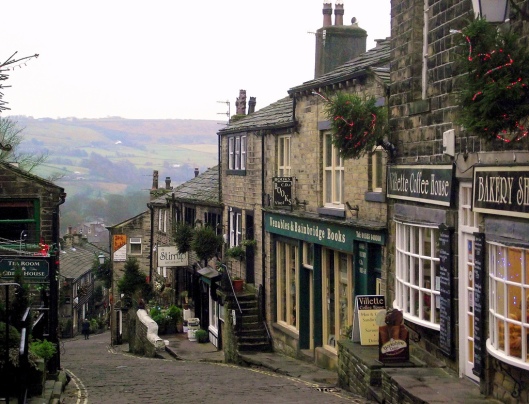 (And we note, by the way, that its depiction in the Jackson films doesn’t appear to reflect JRRT’s description that the houses were made of stone: rather, it appears to be filled with half-timbered, plaster and lath constructions.) 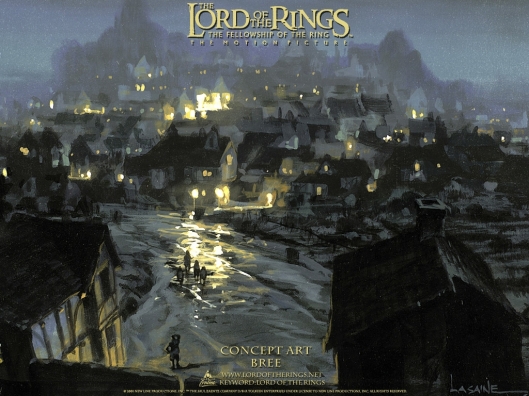 Here, the Hobbits stay at the Prancing Pony. 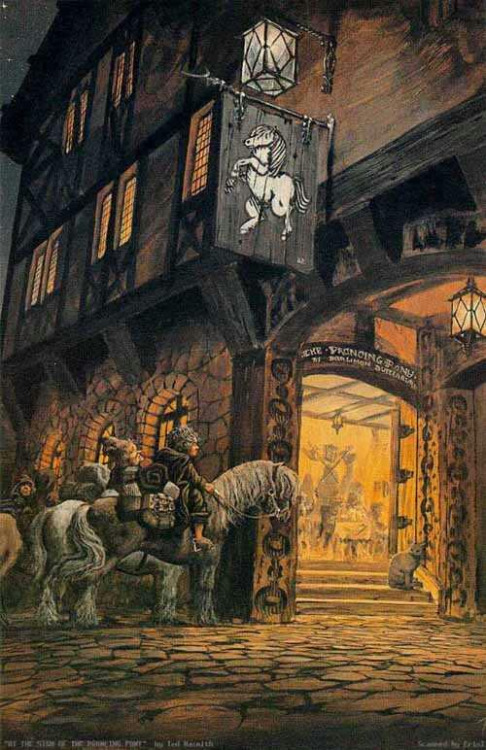 Tolkien describes it as

“a meeting place for the idle, talkative, and inquisitive among the inhabitants, large and small…”

To our minds, it probably looked like one of those very old English coaching inns. 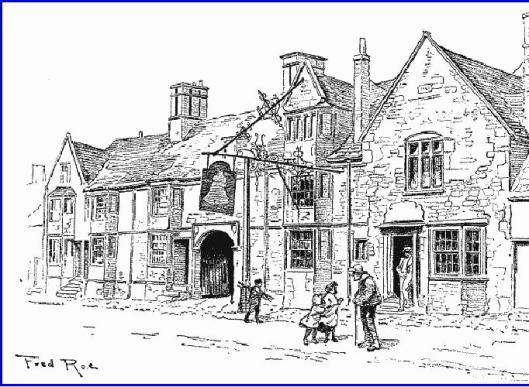 And we begin our research inside.

Before we do, let’s spend a moment thinking about that word “news”, as in “Strange as news from Bree”.

In pre-print days, for most people in most places, information about events was circulated only by word-of-mouth. There were a few exceptions: the government in Rome produced hand-written circulars, called acta which were put up in the Forum Romanum from the middle of the last century BC through to the 3rd century AD. These would obviously have had a very limited circulation, however, and we can imagine that the contents would still have been passed on mouth-to-mouth for most people in Rome. 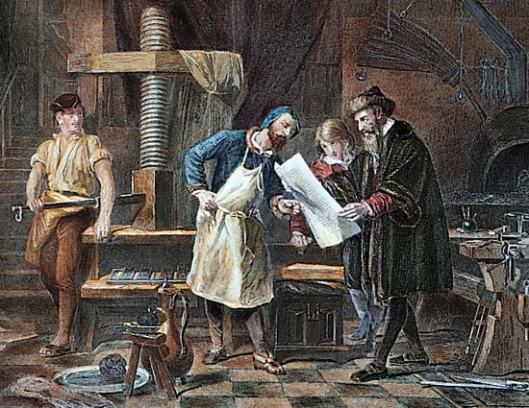 the earliest surviving printed newspaper known at present dates from 1609, produced in Germany. (It appears that the publisher, Johann Carolus, had actually begun printing, rather than hand-copying, in 1605.) 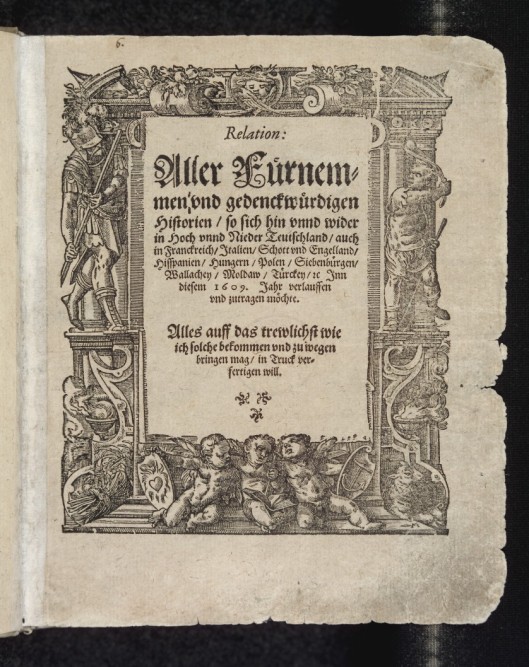 As far as we can tell, true to the general image of Middle Earth as a medieval world, printing presses have yet to appear (unless Sauron is producing very limited editions at the Barad-dur Press and circulation consists of exactly one copy). This means that we are still in the preprint world of hand-copying, when it comes to documents. In the western European world, on which places like Gondor are modeled, this means scriptoria—copy centers—mainly in monasteries and in royal courts where the copyists had probably been trained in monastic scriptoria. 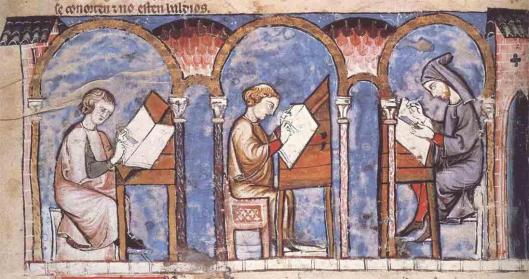 Because there are no religious foundations or even schools of any sort mentioned in Middle Earth, we don’t know how or where documents were written or copied or even how and where anyone learned to read and write (except Sam, who was taught his letters by Frodo), but literacy turns up all over the place, from the Red Book of Westmarch to the runes of the dwarves to the writings Gandalf says he searched through in the archives of Minas Tirith.

All of this is, in a sense, commemorative—it’s history, really, whether a dwarvish map or tomb inscription, or an account of the War of the Ring. What about other things, however—word of daily events, or even entertainment forms, like songs and poems, things which may some day become part of history but, at the present, seem much more ephemeral? That’s what we’ve come to Bree to find out—and we’re quickly helped in our investigation by the host of the Prancing Pony, Barliman Butterbur, who says to Frodo and the others:

“ ‘I don’t know whether you would care to join the company…Perhaps you would rather go to your beds. Still the company would be very pleased to welcome you, if you had a mind. We don’t get Outsiders—travelers from the Shire, I should say, begging your pardon—often; and we like to hear a bit of news, or any story or song you may have in mind…’ “

And there’s that emphasis on the oral: “we like to hear”. You, readers, have a world of electronic devices to turn to for “a bit of news, or any story or song”, as well as, in the case of news, actual newspapers, not to mention bookstores, libraries, and the wonderful resources of Gutenberg and the Internet Archive. None of that in any form is available to carry or preserve information in Middle Earth. What books there are—and they are manuscripts, remember, things which look like this— 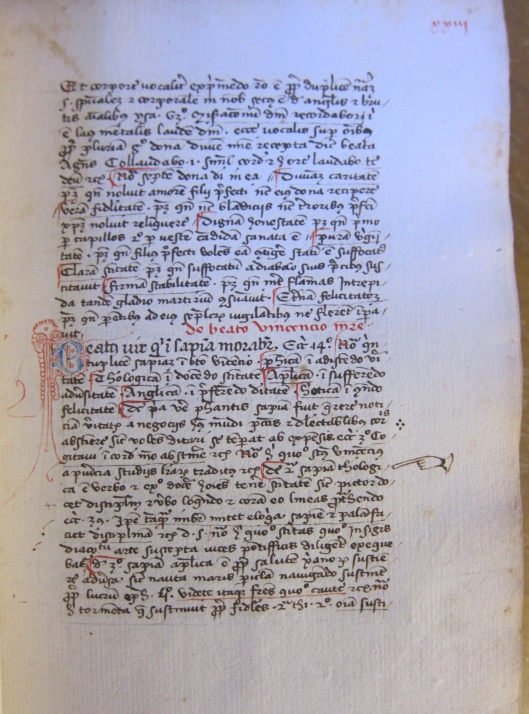 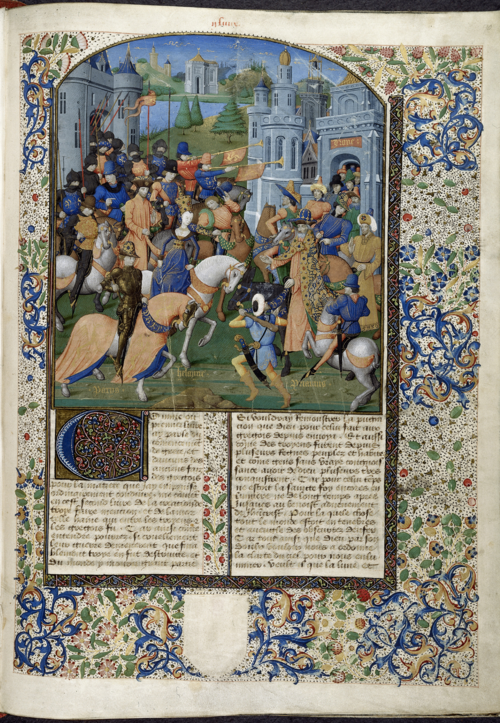 are either in royal archives, as in the case of those which Gandalf consults in Minas Tirith, or in the hands of families, as is the fate of The Red Book of Westmarch and other such items in the Shire. And so people are, on the one hand, eager for news and entertainment, but, on the other, forced either to make it for themselves or to wait for willing strangers to add to their meager store.

It’s natural, then, that “As soon as the Shire-hobbits entered, there was a chorus of welcome from the Bree-landers.” The first local reaction to Frodo’s attempts to create an explanation for why he and his companions are traveling is also natural:

“He gave out that he was interested in history and geography (at which there was much wagging of heads, although neither of these words were [sic] much used in the Bree-dialect). He said he was thinking of writing a book (at which there was silent astonishment), and that he and his friends wanted to collect information about hobbits living outside the Shire, especially in the eastern lands.”

In the nearly-oral world of Bree (there must be some literacy—the Prancing Pony has a sign with an inscription and Barliman seems to know what a letter is), the next reaction is also natural:

“At this a chorus of voices broke out. If Frodo had really wanted to write a book, and had had many ears, he would have learned enough for several chapters in a few minutes. And if that was not enough, he was given a whole list of names, beginning with ‘Old Barliman here’, to whom he could go for further information.”

These would all be so-called “oral informants”—not one mention of manuscripts or documents to suggest that information is conveyed and recorded in writing—and so the Breelanders’ third and final reaction is also natural:

“But after a time, as Frodo did not show any sign of writing a book on the spot, the hobbits returned to their questions about doings in the Shire.”

It’s obvious then, that books, like the words “history” and “geography”, are almost alien to these people and so their interest is in the spoken—or sung—word, which is why, when Frodo breaks into Bilbo’s “There is an inn…” to distract the audience from Pippin’s indiscreet recounting of the birthday party, his stratagem almost works—until he overdoes it and—

But even in the aftermath, although it leads to more trouble for Frodo and his companions, Butterbur can imagine that, in time, that surprising event, like all of the others in this near-oral world, will subside into word-of-mouth.

“He reckoned, very probably, that his house would be full again on many future nights, until the present mystery had been thoroughly discussed.”

And then it would become just another piece of strange news from Bree.