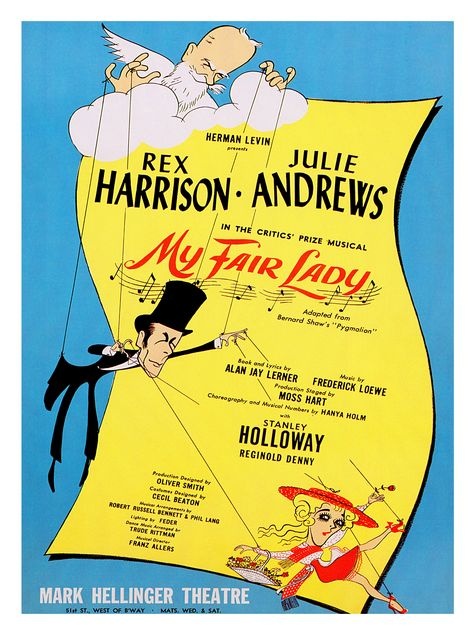 based upon George Bernard Shaw’s play, Pygmalion (1913), one major character is Professor Henry Higgins, who studies English dialects.  He is given to musical rants and, in his first, he laments “Why can’t the English teach their children how to speak?” with the couplet:

“An Englishman’s way of speaking absolutely classifies him,

The moment he talks he makes some other

Somewhere—we’ve temporarily lost the quotation—Tolkien, in signing over his rights to The Lord of the Rings to someone, stipulated that Merry and Pippin weren’t to be “rustics”.

This word “rustic” entered English in the mid-15th century, being derived from the Latin rus, ruris, n., “country/farm” and its adjective, rusticus/a/um, “rural/of the countryside”, the adjective then meaning “a country person”—like these Romans 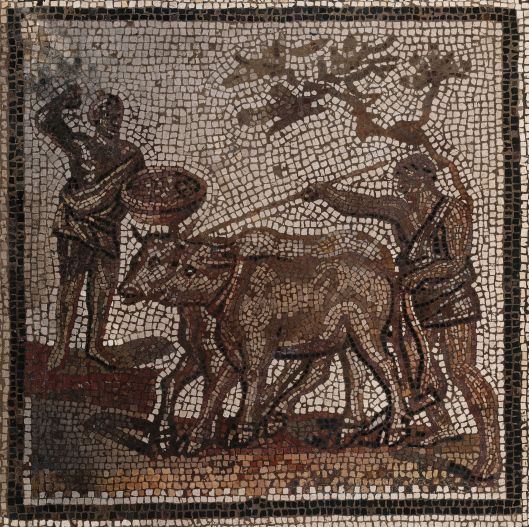 or these, in the medieval world 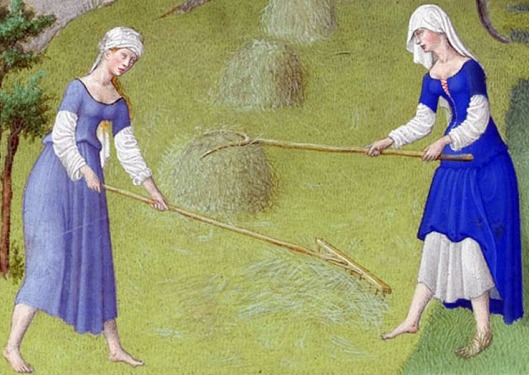 or these, from JRRT’s childhood. 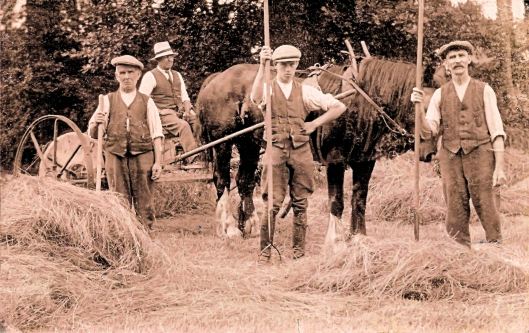 To JRRT, the linguist, what made the rustic was clearly not so much the look or even the activities which country people did so much as how they spoke. In Chapter One of the first book of The Lord of the Rings, we overhear a group of older hobbits discussing Bilbo and Frodo and Daddy Twofoot says:

“And no wonder they’re queer…if they live on the wrong side of the Brandywine River, and right agin the Old Forest.  That’s a dark bad place, if half the tales be true.” (The Fellowship of the Ring, Book One, Chapter 1, “A Long-Expected Party”)

Here, we see “agin” for “again”, “dark bad place”, which is more a rhythmic pattern of dialect than the words themselves (although we wonder about the placement of those adjectives together), and the use of the old subjunctive “if half the tales be true”.  And, in the next paragraph, Gaffer Gamgee then uses a dialect form of “drowned”—“drownded”.  The content of this dialogue is gossip, but the sound of it is meant to provide a quick aural sketch of rural people with perhaps the faint suggestion that such gossip is based upon few facts and much “folk wisdom”, such as the idea that, because one lives on the far side of a river, one is “queer”, leading to the conclusion that rustics are, at best, ill-informed, and, at worst, ignorant and potentially bigoted.

And so, we would presume that what JRRT wanted was that Frodo’s cousins should sound like Frodo, who speaks, in Middle-earth, what Tolkien calls “the Westron or ‘Common Speech’ of the West-lands of Middle-earth” and what is in Modern-earth called “Received Standard English”.  Here’s a brief example of that from that same chapter, when Gandalf and Frodo are discussing Bilbo and the Ring:

“If you mean , inventing all that about a ‘present’, well, I thought the true story much more likely and I couldn’t see the point of altering it at all.  It was very unlike Bilbo to do so, anyway; and I thought it rather odd.”

Vocabulary  choice plays a strong part here, with a Latinate element—“altering”—and the use of “odd”, where the Gaffer had earlier used “queer”, plus what we might think of as “higher class” words, like “likely” and “unlike” and “rather” as adjectives.

The Bagginses and their relatives, after all, are looked upon as well-to-do–“a decent respectable hobbit” the Gaffer says of Frodo’ father, Drogo, and calls Bilbo, “a very nice well-spoken gentlehobbit”.  In Middle-earth, dialect—especially here meaning that spoken by what appear to be meant to be “rustics”—can make the difference between gentlehobbits and people like the Gaffer.   As the Henry Higgins mentioned above says to Colonel Pickering, whom he regards as a social equal, of Liza Doolittle, a Cockney (inner London, lower-class girl):

“If you spoke as she does, sir,

Instead of the way you do, 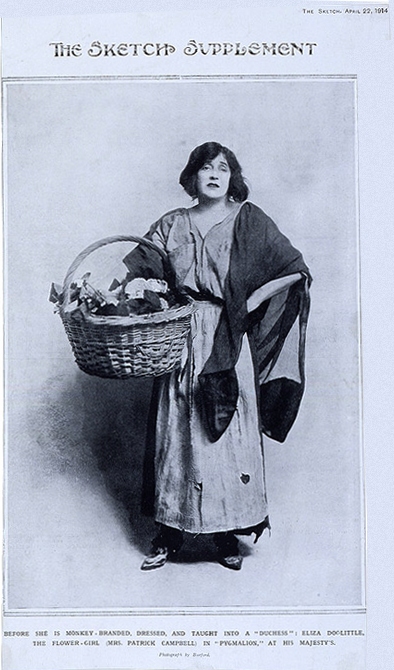 It’s not just among hobbits that we see what Henry Higgins calls a “verbal class distinction”, however.  Here’s Saruman 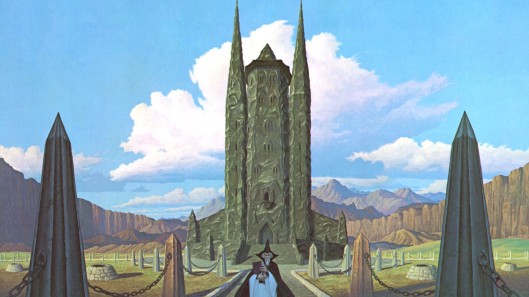 “I did not expect you to show wisdom, even in your own behalf; but I gave you the chance of aiding me willingly, and so saving yourself much trouble and pain.  The third choice is to remain here until the end.” (The Fellowship of the Ring, Book Two, Chapter 2, “The Council of Elrond”)

We notice here the long compound sentence (long sentence made up of clauses which depend upon each other), from “I” to “pain”.  This is clearly the equivalent of “gentlehobbit” talk.

And here is one of Saruman’s orcs:

“…We are the fighting Uruk-hai!  We slew the great warrior.  We took the prisoners.  We are the servants of Saruman the Wise, the White Hand, the Hand that gives us man’s-flesh to eat  We came out of Isengard, and led you here, and we shall lead you back by the way we choose.  I am Ugluk.  I have spoken.” (The Two Towers, Book Three, Chapter 3, “The Uruk-hai”) 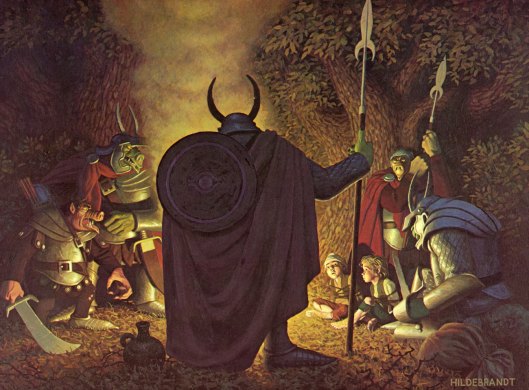 This is clearly not “rustic” speech—just compare it with that of Daddy Twofoot, above.  Instead, it reminds  us of translations of Native American speeches, like this, from the brave and wise Chief Joseph (1840-1904—Native American name in translation, “Thunder Traveling to Higher Areas”), 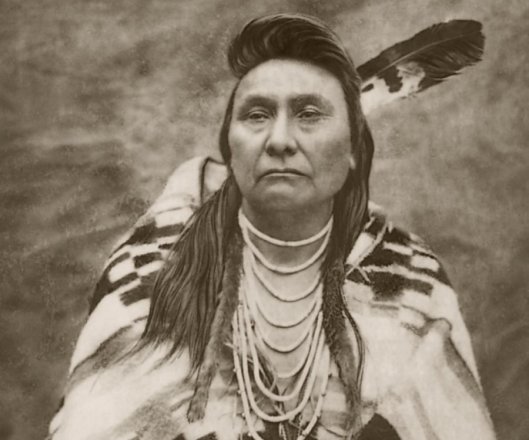 of the Nez Perce:

“Tell General Howard I know his heart. What he told me before, I have it in my heart. I am tired of fighting. Our Chiefs are killed; Looking Glass is dead, Ta Hool Hool Shute is dead. The old men are all dead. It is the young men who say yes or no. He who led on the young men is dead. It is cold, and we have no blankets; the little children are freezing to death. My people, some of them, have run away to the hills, and have no blankets, no food. No one knows where they are – perhaps freezing to death. I want to have time to look for my children, and see how many of them I can find. Maybe I shall find them among the dead. Hear me, my Chiefs! I am tired; my heart is sick and sad. From where the sun now stands I will fight no more forever.”

How might we characterize this?  It’s clearly very different from the speech of the orc’s master, who tends to speak in longer, more complex sentences, indicating more sophistication in the use of language (we remember the danger of listening too long to him, as demonstrated in The Two Towers, Book Three, Chapter 10, “The Voice of Saruman”).   We would say that, where the “rustic” dialect—pronunciation (“agin”), odd forms (“drownded”), old verb forms (“be true”)–differentiates the Gaffer and Daddy Twofoot from Frodo (and Merry and Pippin), for the orcs—or Ugluk, at least– it is sentence structure which differentiates the Isengard equivalent of “gentlehobbit” speech from that of the “rustic” orcs.

It isn’t only sentence structure which we would suggest makes orcs sound different, however, and we’ll talk more about this—and about another “rustic”—a real one—in Part 2 of this posting, next week.