This is the next-to-last in a little series on several of the fairy tales of Charles Perrault (1628-1703) from his 1697 collection, Histoires ou Contes du Temps Passe (“Stories or Tales of Past Time”), better known by a kind of subtitle, Contes de Ma Mere L’Oye (“Tales of My Mother Goose”). 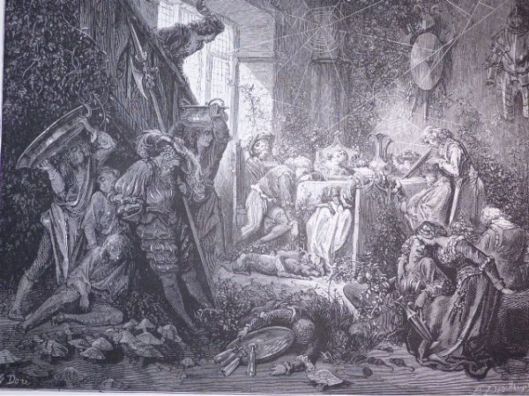 In the third post, we began to look at “Cinderella”, more specifically in opera, from Isouard’s 1810 Cendrillon to Viardot’s 1904 Cendrillon.

whom you may know from the 2011 film Hugo

based upon Brian Selznick’s 2007 wonderfully inventive novel, The Invention of Hugo Cabret.

Even if you aren’t familiar with Melies, you may recognize his work in this image

from his 1902 science fiction film, Le Voyage dans La Lune (“The Trip to the Moon”), thought by scholars to be the first science fiction film (or at least first surviving such film.  Silent film historians estimate that only about 10% of all silent films made are still available to us.  Here’s a LINK to the film so that you can enjoy it for yourself).

Cendrillon was Melies’ most elaborate film to date and was a commercial success, even though only just under 6 minutes long—which says something for the expectations of the movie-going public of 1899.

As it is so short, it has only a couple of scenes—the kitchen in Cinderella’s house, the palace ballroom, Cinderella’s room, and what appears to be the outside of the palace—and very much depends upon the viewer already knowing the basic story (it begins, for example, with a very fancily-dressed woman leaving the kitchen and the sudden appearance of the Fairy Godmother, with no introduction at all).  Its greatest strength, for us, is in its transformation scenes (a Melies’ specialty), particularly the change of rats/mice into coachmen and footmen. (And here’s a LINK to the film, see if you agree with the 1899 audience.) 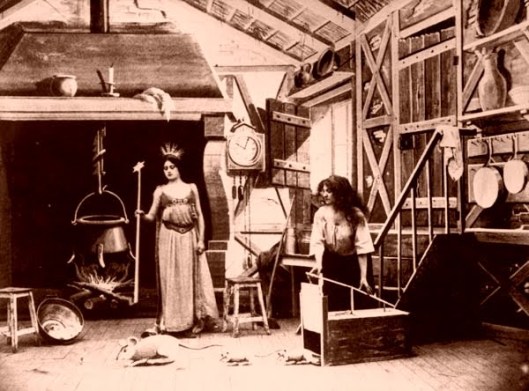 Our second film is from 1911 and is nearly 15 minutes long, meaning that it actually has time to tell the story, if not in a leisurely fashion, at least in a more complete one than the Melies.  This is a US version of the story, starring an early popular favorite, Florence La Badie (or Labadie). 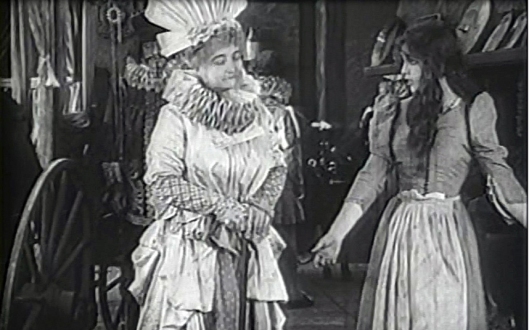 Forgotten except by silent film enthusiasts, La Badie was a hardworking dare-devil, appearing in nearly 200 films between 1909 and her death in 1917, and doing most of her own stunts.  She was also someone who personified a new look for young women in the years leading up to the Great War—as this portrait (and there are more like it) shows.

If you follow this LINK, you can see not only the actress, but a “Cinderella” which has almost everything we would expect from the Perrault original.

Florence La Badie had gotten into films through the suggestion of an acting friend, Mary Pickford,

who starred in our next Cinderella, in 1914.

Two things strike us about this: 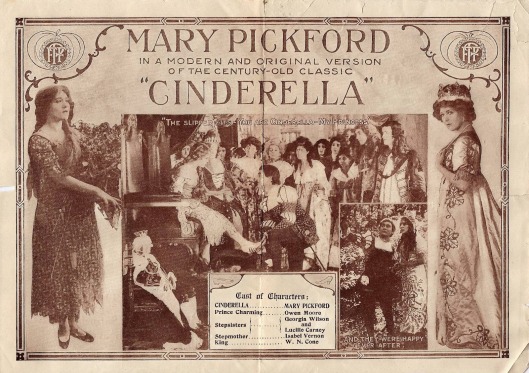 This version, with its almost luxurious length, has plenty of time not only to tell the Perrault story, but to makes two additions to the plot:  Cinderella actually meets the prince before the ball, near her home and they fall in love—but are then separated; the stepsisters visit a fortune-teller, who informs them cryptically that one of their family will be successful at the ball.  (Here’s a LINK so that you can enjoy this more elaborate version.)

In the midst of these US versions, Georges Melies issued a second one himself.  At about 24 minutes long, it is much grander than his 1899 production, spending nearly a quarter of its length on the transformation of Cinderella from kitchen maid to grand lady alone.  The contrast between the 1899 pumpkin coach and the 1913 one illustrates this nicely.

It did not enjoy the success of the 1899 original, perhaps because, the weight of production values was simply too heavy for the little story inside, which was smothered by all of the plumed hats and sweeping bows.  We admit that we find this version a little slow, but the creation of the pumpkin coach is still as impressive to us as it must have been in 1913.  Here’s a LINK so that you can judge for yourself. It’s dated 1912, by the way, when the film was made, but it premiered in 1913, so we are sticking to the later date.

It has been suggested that Melies, in the look of this later take on the story, was influenced by the work of Gustave Dore (Do-RAY) (1832-1883).

Here’s one of the three illustrations done for the story.

To us, however, Melies thinks of the story taking place in the time of Louis XIII (reigned 1610-1643), when Dumas’ “Musketeers” novels are set (with a little 18th-century addition here and there). 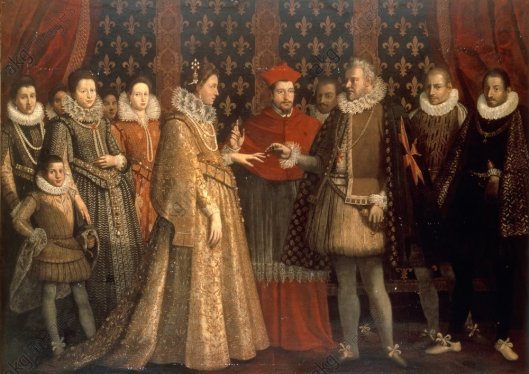 tackled both “Cinderella” in 1919 and “Sleeping Beauty” in 1920, with retellings by Charles S. Evans.  Always original and surprising in his approach, Rackham here has produced what we believe to be two of his most inspired works—we’ll talk about them, as well as more versions of “Cinderella”, in our next.

And thank you, as ever, for reading.