We have just said goodbye to an old friend, E, who stayed all too briefly with us on his way to and from a conference.  E, like us, is a big fan of maps and we had a lot of conversation on the topographical charting of Middle-earth, particularly as seen in The Lord of the Rings.

A map forms the basis of the plot of The Hobbit, of course.

And the need for an accurate depiction of (fictional) geography haunted its author as he expanded his story, as he says in a letter to Rayner Unwin, 11 April, 1953:

“Maps are worrying me.  One at least (which would then have to be rather large) is absolutely essential.  I think three are needed:  1. Of the Shire; 2. Of Gondor; and 3. A general small-scale map of the whole field of action.  They exist, of course; though not in any form fit for reproduction—for of course in such a story one cannot make a map for the narrative, but must first make a map and make the narrative agree.”  (Letters, 168)

(If you would like to see an interesting selection of Tolkien maps, here’s a LINK to the Tolkien Estate website, which has a number of them, including the first map of the Shire.)

The idea of making a map, rather than a story, first reminded us of an earlier author, who once said much the same thing.

In the summer of 1881, Robert Louis Stevenson

was on an extended tour of central and eastern Scotland with his parents, his wife, and his stepson, Lloyd Osbourne.

From early August to late September, they stayed in Braemar

Then the weather intervened:

“There it blew a good deal and rained in a proportion…and I must consent to pass a good deal of my time between four walls…There was a schoolboy [his stepson, Lloyd]…home from the holidays…He had no thought of literature; it was the art of Raphael that received his fleeing suffrages; and with the aid of pen and ink and a shilling box of water colours, he had soon turned one of the rooms into a picture gallery.  My more immediate duty towards the gallery was to be showman; but I would sometimes unbend a little, join the artist (so to speak) at the easel, and pass the afternoon with him in a generous emulation, making coloured drawings.  On one of these occasions, I made the map of an island; it was elaborately and (I thought) beautifully coloured; the shape of it took my fancy beyond expression; it contained harbours that pleased me like sonnets; and with the unconsciousness of the predestined, I ticketed my performance ‘Treasure Island’.”  (RL Stevenson, “My First Book:  ‘Treasure Island’”, The Idler, August, 1894)

In fact, as Stevenson writes earlier in this essay, it was not, in fact, his first book, or even his first novel, but it was his first published novel.  After its inspired beginning as a map, it first saw publication not as a novel, but as a serial in 17 installments in a magazine called Young Folks, from 1 Oct, 1881 to 28 Jan, 1882, under a pen name, “Captain George North”.  Its first appearance as a novel was in November, 1883, with the title, Treasure Island, or, The Mutiny of the Hispaniola. 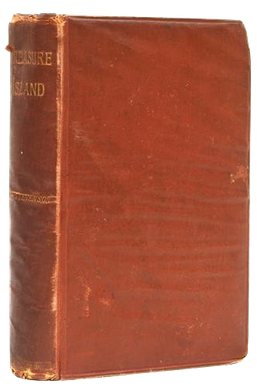 This has produced many subsequent republications over the years, our favorite being the 1911 edition, 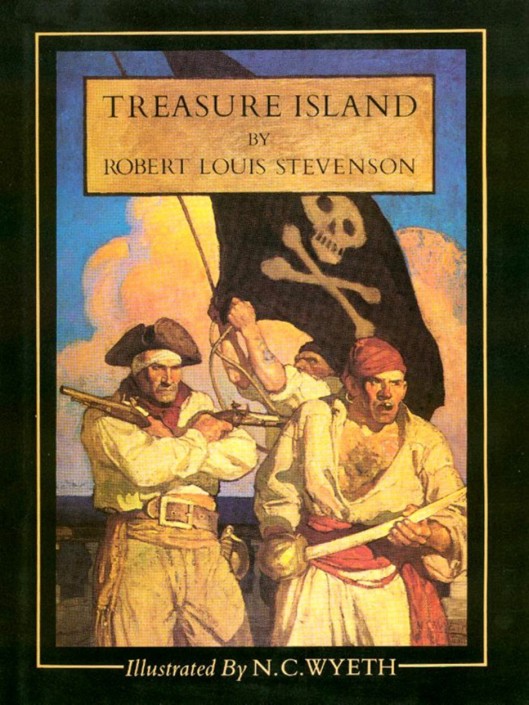 with its wonderful, atmospheric illustrations by NC Wyeth.

But what about the map which started it all?

“But the adventures of Treasure Island are not yet quite at an end.  I had written it up to the map.  The map was the chief part of my plot.  For instance, I had called an islet ‘Skeleton Island,’ not knowing what I meant, seeking only for the immediate picturesque, and it was to justify this name that I broke into the gallery of Mr. Poe and stole Flint’s pointer [a sprawled skeleton, if you don’t know the book].  And in the same way, it was because I had made two harbours that the Hispaniola was sent on her wanderings with Israel Hands.  The time came when it was decided to republish [that is, from magazine to book form], and I sent in my manuscript, and the map along with it, to Messrs. Cassell.  The proofs came, they were corrected, but I heard nothing of the map.  I wrote and asked; was told it had never been received, and sat aghast.  It is one thing to draw a map at random, set a scale in one corner of it at a venture, and write up a story to the measurements.  It is quite another to have to examine a whole book, make an inventory of all the allusions contained in it, and with a pair of compasses, painfully design a map to suit the date.  I did it; and the map was drawn again in my father’s office, with embellishments of blowing whales and sailing ships, and my father himself brought into service a knack he had of various writing, and elaborately FORGED the signature of Captain Flint, and the sailing directions of Billy Bones.  But somehow it was never Treasure Island to me.”

So here is that second version.

From his experience, Stevenson drew the same conclusion as JRRT would nearly 60 years later:

“I have said the map was the most of the plot.  I might almost say it was the whole…It is, perhaps, not often that a map figures so largely in a tale, yet it is always important.  The author must know his countryside, whether real or imaginary, like his hand; the distances, the points of the compass, the place of the sun’s rising, the behavior of the moon, should all be beyond cavil…But it is my contention—my superstition, if you like—that who is faithful to his map, and consults it, and draws from it his inspiration, daily and hourly, gains positive support, and not mere negative immunity from accident.  The tale has a root there; it grows in that soil; it has a spine of its own behind the words.  Better if the country be real, and he has walked every foot of it and knows every milestone.  But even with imaginary places, he will do well in the beginning to provide a map; as he studies it, relations will appear that he had not thought upon; he will discover obvious, though unsuspected, short-cuts and footprints for his messengers; and even when a map is not all the plot, as it was in Treasure Island, it will be found to be a mine of suggestion.”

(If you would like to read this little essay in full—and we recommend it—here’s a LINK.)

We will end here as, inspired, we’re off to redo the map for our imaginary medieval Russia, Cherna.