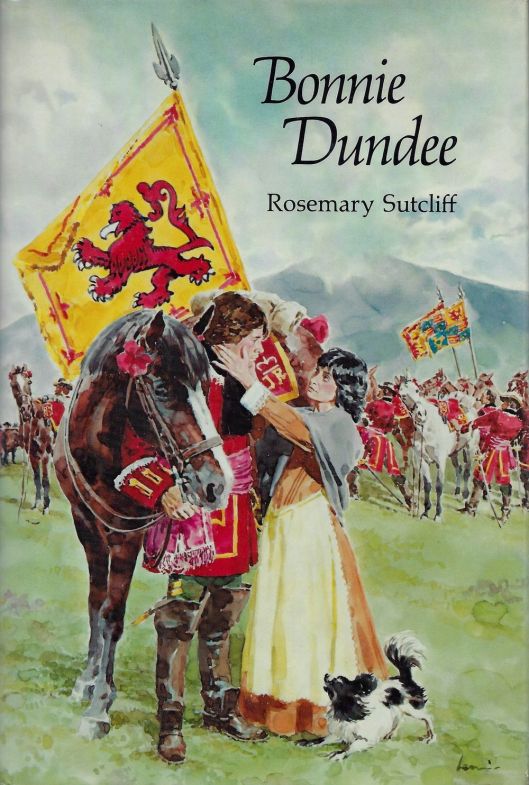 by one of our favorite YA historical authors, Rosemary Sutcliff (1920-1992), we were snagged by what, at first, seems just an odd little detail—but we’ll come to that.  First, let’s talk about the book in general.

The title refers to a 17th-century Scots nobleman, John Graham, 7th Laird of Claverhouse, 1st Viscount Dundee (1648-1689), also known as “Bloody Clavers” for his zeal in observing the law in a complicated religious situation (the subject of a Sir Walter Scott novel, Old Mortality, 1816),

and “Bonnie Dundee” from his noble title (and, we presume, his good looks).

In 1689, Dundee was a royal cavalry officer, leading a regiment of mounted infantry, called, at that time, dragoons.

In that same year, a combination of elements of Parliament, the army and navy, and the forces of William, Prince of Orange, Stadtholder of the other provinces of the Netherlands,

and husband of Mary,

the daughter of the King of England, James II, had overthrown James. 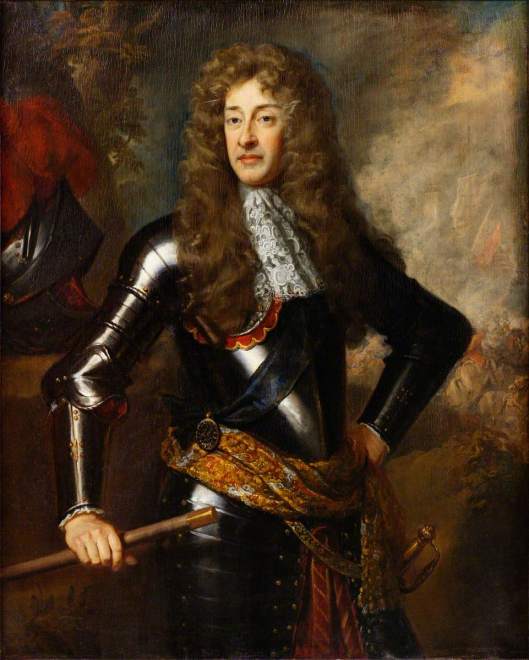 William was the son of James’ sister, and so James was both his uncle and his father-in-law—a very tricky situation!

Rather than fight, James had fled, but elements in Ireland and Scotland were still loyal.  One of the main leaders of resistance in Scotland was Bonnie Dundee.

Against him was a Williamite army, led by Hugh Mackay.

The major battle happened at the Pass of Killiecrankie, 27 July, 1689.

The government’s side consisted almost entirely of regular infantry regiments, but a real mixture of raw and experienced soldiers, it seems. 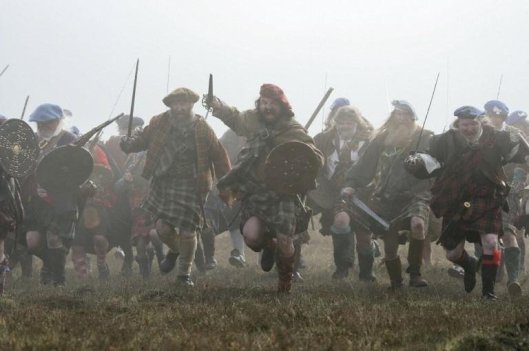 The usual method in period battles was to begin by softening up the enemy with artillery fire in hopes that you could goad him into attacking you or at least you might shake his organization.

Then, if the enemy advanced, you used your firepower to break up his formations

and, if you were lucky, to drive him back, whereupon you might loose your cavalry to drive him off the battlefield. 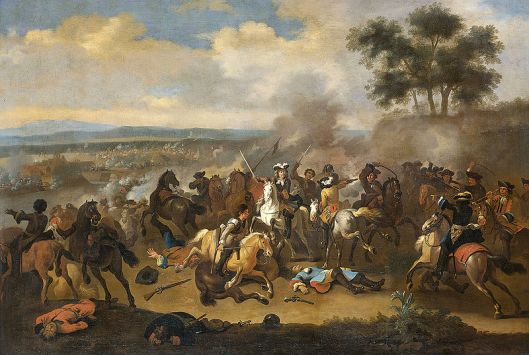 1689 was a time of transition in European armies, in which the Renaissance weapon, the pike,

which had been increasingly flanked by men with firearms,

was being replaced by the bayonet, turning a musket into a short pike and thus removing the need for pikemen.  The earliest bayonets, however, were simply knives stuck into the muzzle of the musket.

Of course, if you stick a knife into the muzzle, it means that you lose the ability to keep up your volleys and this seems to have been part of the difficulty for MacKay, the Williamite general.  The Highlanders had, as their main weapon, the charge, the goal being to get close to the enemy before he could do much damage with firearms, and cut him to pieces with swords and axes. 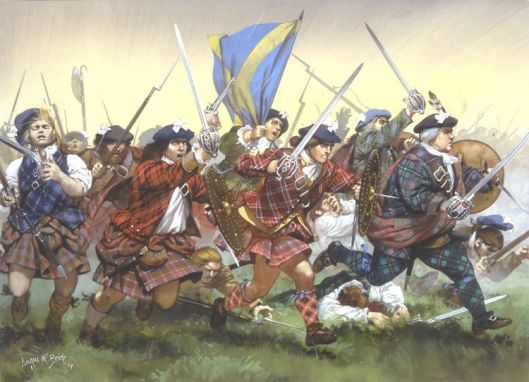 Somehow, the Highlanders managed to break up the Williamite regiments—possibly because they were caught between firing and fixing bayonets?—and drive them off—although at the cost of losing Dundee, mortally wounded while attempting to direct the attack. 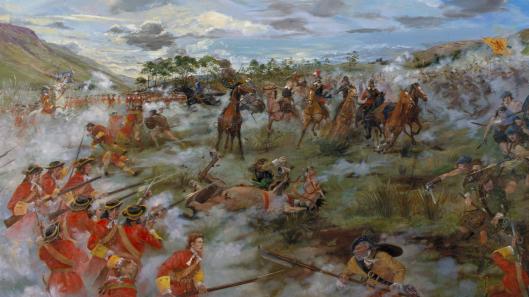 Sutcliff’s hero, a Scots Lowlander named Hugh Herriot, is first a groom in Dundee’s household and then a trooper in his dragoons, eventually following Dundee to Killiecrankie and his death.  (Dundee was buried nearby just after the battle.)

It is on the march to the battlefield that Hugh sees something which briefly captures his attention at the time, but nothing more, and it was this description which has haunted us, ever since we put the book down:

“Once we came to the place where a cattle-track dipped down from the north, to cross the river by a made ford.  And on the far side, tucked in among the roots of overshadowing hazel and alder trees, looking as twisted and as rooted into the bank as themselves, an old woman in an earth-coloured gown knelt washing a pile of household clothes and linen.

I mind thinking it was late in the year for that; mostly the crofter women fling everything out-of-doors and deal with the bed-bugs and wash all things washable in May.  I mind also noticing that there was something of a dark brownish-red colour among the grey pallor of the unbleached linen; a shawl, maybe; you could not see, in the cave of shadows under the alder branches.

She took no more notice of our passing than if we had not been there at all.  And we marched on, and I thought no more of the thing, for the time being.”  (Bonnie Dundee, Chapter 21, “The Old Woman by the Ford”)

It’s only when later, in camp, Hugh senses that something appears to be worrying the Highlanders that it comes clear that they, too, saw the old woman—and something more, as his Highland friend, Alisdair, explains:

“Did ye see anything—any one, by the cattle ford an hour’s march up-river, as we came by?”

To which Hugh answers:

And Alisdair says in return:

“Aye, and you a Lowlander, ye would not be knowing.”

“The Woman of the Sidh—the Washer by the Ford.”

Although a Lowlander, Hugh does know:

“The Washer by the Ford, and she was washing the blood-stained linen, who comes before the death of chiefs and heroes…”

For us, who grew up in the Greco-Roman world, an old woman at a ford has a completely different meaning:  in the story of Jason, his patron-to-be, Hera, disguises herself as an old woman and sits by a ford, testing men by asking to be carried across.  Jason agrees to and loses a sandal in the process, thus fulfilling a divine warning sent to the king of Iolcus about his eventual overthrow (by Jason):  beware the man with one sandal.

This story in the Sutcliff—really, as we said, only a little detail in a much larger story—struck us as not only extremely well told (which we expect from Sutcliff, a very gifted story-teller—we’ll talk more about her in a future post), but well-told because, initially, it does just seem like nothing at all—something idly noticed and nothing more.  Its creepiness comes not from the description, which might be ordinary, but from its Celtic heritage—the Highlanders belong to a world made long before 1689, being a combination of the prehistoric settlers of the north, the Picts, 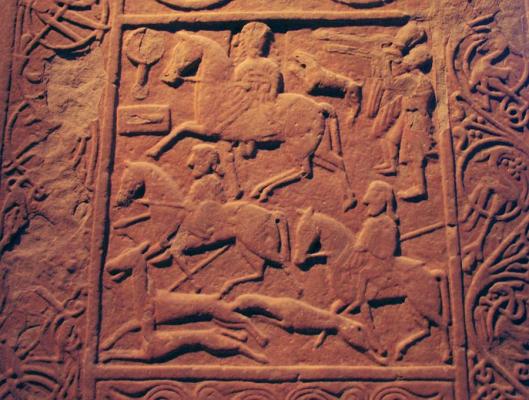 and the Irish, who began arriving in Scotland in the 5th century AD.

Although the Irish had converted to Christianity early, there were certain older beliefs which lasted throughout many centuries.  The Old Woman at the Ford is clearly one.  In Gaelic, the Irish-based language of Scotland, she is the Bean Nighe, (ben NEE-yeh, “the washer-woman”), or as Alisdair calls her, “the Woman of the Sidh” (sheethe).

“Sidh” has, in fact, several possible translations:  it can mean “peace”, but, as well, it signifies the Neolithic tumuli (like the barrows to the east of the Old Forest in Middle-earth), as well as the People of the Other World (who may either live in tumuli, or use them as doorways into that Other World). 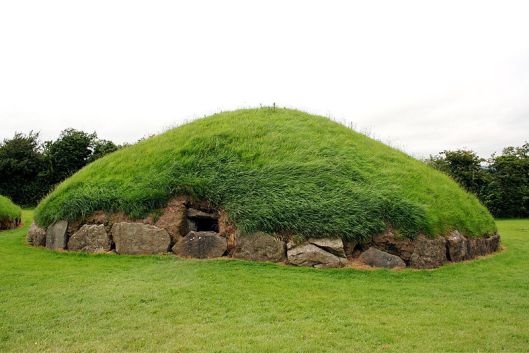 Our English word “banshee” is simply the Irish ben side (ben SHEE-thyeh), “woman of the Sidh” which, as we’ve seen, is just what Alisdair calls the Old Woman at the Ford.

Banshees—who do not necessarily always appear as old women, sometimes visit as young–are a kind of messenger from the Other World, sent to warn family members of an impending death.  Their manner of communicating this can vary—in some parts of tradition, they fulfil the task of old women at traditional funerals, wailing in grief, with a sound which has come into English as “keening”. 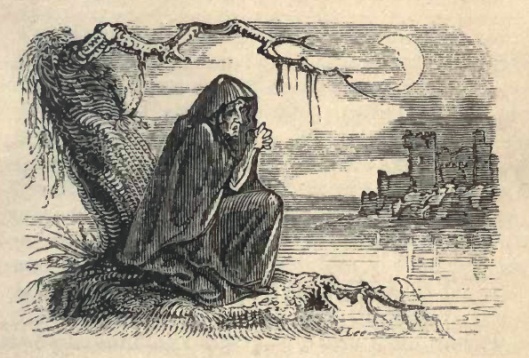 To give you an idea of this, here’s a LINK to a clip from the 1959 Disney movie, Darby O’Gill and the Little People, in which we see not only a banshee, but also the next step, the coiste bodhar, [KOH-shte BOW-er] the “silent coach” with its headless coachman, the Dullahan, called in Irish, Gan Ceann,(gan KENN) “Headless”, who carries the dead person…somewhere… [Be warned, by the way:  one of us saw this only once, many years ago, on a Disney program, and has spent many further years trying not to remember it!]

In other parts of the tradition, the banshee stands outside the doomed person’s window and simply says her/his name (which impresses us as especially creepy), or calls out “My wife!” “My husband!” or “My child!”

In Ireland, the banshee is restricted to the pre-Norman-invasion population (pre-the-year 1169, more or less), suggesting that this is a purely Celtic belief, which would make sense of Hugh’s Highland friend, Alisdair’s, fear of the Washer.

It has been suggested that perhaps this figure is descended from a fearful Irish goddess, the Bodbh (BAH-thv), 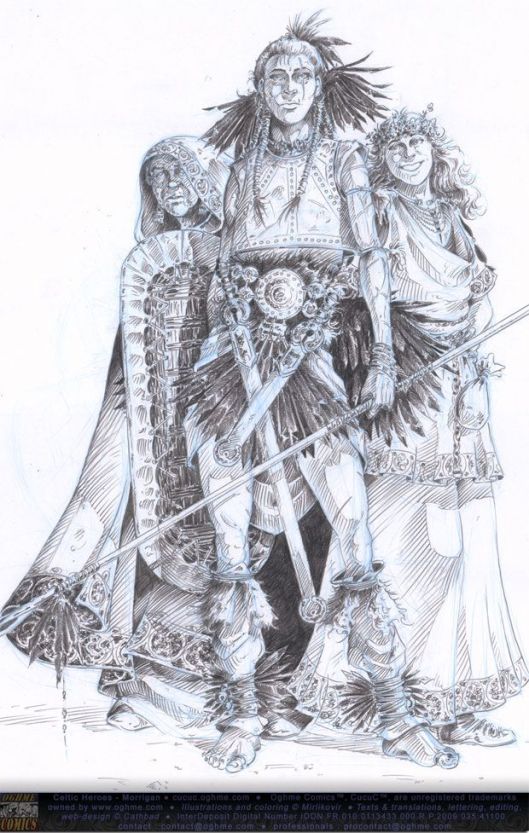 who has a possible three-part persona and appears before battles and on battlefields, with a raven as her totemic animal.

She is also called Morrigan, meaning “great queen”, which sounds rather like a euphemism.  In Old Irish stories, she is the enemy of the boy hero Cuchulain (Koo HOO lun), and brings about his death through tricking him into destroying his own protective spells (he eats dog, his own totemic animal—his name means “hound of Culann”).  There’s a famous bronze statue of him, with her raven on his shoulder, in the old main Dublin post office. 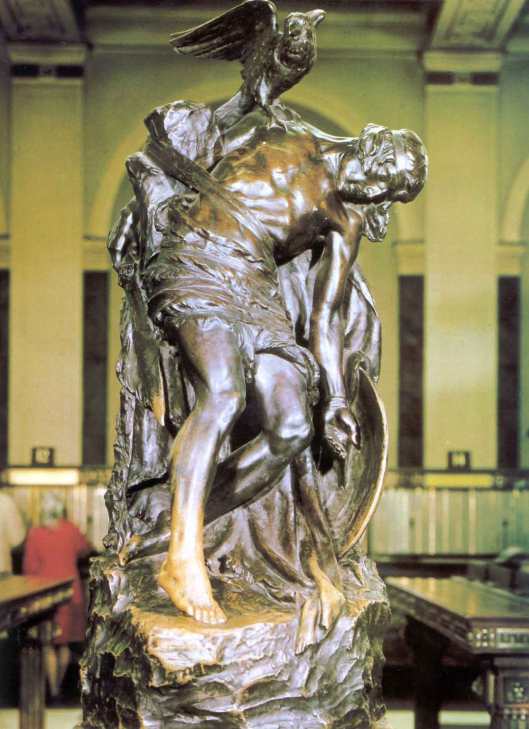 And here Sutcliff now helps us to complete a kind of grim mythological circle.  Hugh Herriot not only knows who the Washer is, but this further fact:

Who is the chief and hero of the novel—and is riding to battle the Williamites?  It’s clear, if one accepts this portent, what is to happen, and yet Hugh tries to deny what he knows to Alisdair—

Alisdair’s reply still chills us—as it does Hugh—and explains why what was originally only a passing observation in this novel has stayed with us: