Adventure, An Unexpected Journey, Eagles, Gandalf, Gwaihir, His Dark Materials, Iofur Rakinson, Isengard, Manwe, Middle-earth, Mirkwood, Moth, Ornthanc, Peter Jackson, Philip Pullman, Radagast, Rohirrim, Saruman, Svalbard, The Battle of the Five Armies, The Council of Elrond, The eagles are coming, The Fellowship of the Ring, The Golden Compass, The Hobbit, The Lord of the Rings, The Return of the King, Tolkien, Wizard

This posting is about a puzzle. Recently, while visiting Orthanc to write about Saruman, we bumped into the problem of how Gandalf escaped from there. Our memory was a little unclear about this—we knew that Gwaihir swooped down to rescue him, but why was Gwaihir there in the first place?

Eagles had appeared twice before in our experience of Gandalf, first when they rescued him and his companions from the goblins and Wargs in Chapter 6 of The Hobbit, “Out of the Frying-Pan into the Fire”. Here, the Lord of the Eagles hears the commotion as the Wargs struggle to overcome Gandalf’s fire magic and, gathering up some of his people, flies down to investigate.

Something similar happens at the Battle of the Five Armies, explained in Chapter 18, “The Return Journey”:

“The Eagles had long had suspicion of the goblins’ mustering; from their watchfulness the movements in the mountains could not be altogether hid.” Thus, they appear self-bid, but, as they are ancient creatures, first made by Manwe and given the role of watchers from the time of the First Age, it’s not surprising that they would act as they did. 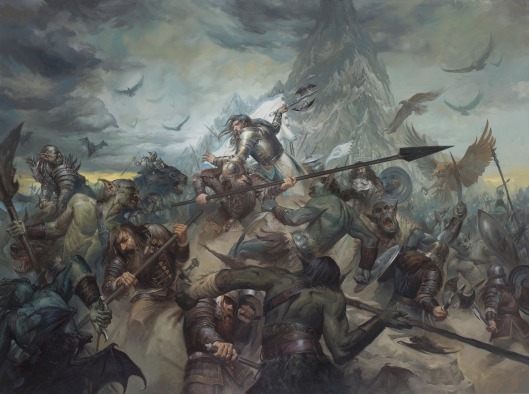 In Jackson’s An Unexpected Journey and, again, in his The Fellowship of the Ring, an eagle appears after Gandalf has had a heart-to-heart with a moth.

With a moth? We asked ourselves. We scratched our heads and wondered: does JRRT use a moth? And, if so, where did the moth come from?

In fact, what really happens is a very neatly constructed piece of plotting on the part of the author, all of which is very nicely laid out in a couple of pages of “The Council of Elrond” during Gandalf’s long narrative.

“That was the undoing of Saruman’s plot. For Radagast knew no reason why he should not do as I asked; and he rode away towards Mirkwood where he had many friends of old. And the Eagles of the Mountains went far and wide, and they saw many things…And they sent a messenger to bring these tidings to me.

So it was that when summer waned, there came a night of moon, and Gwaihir the Windlord, swiftest of the Great Eagles, came unlooked-for to Orthanc; and he found me standing on the pinnacle. Then I spoke to him and he bore me away, before Saruman was aware.”

Although we have solved the puzzle of Gandalf’s escape, we have no answer to why this natural and even elegant piece of plotting wasn’t used in the film any more than we understand why Radagast is turned into the horrible, clownish figure he is in the Hobbit films, having been described in “The Council of Elrond” simply as “a worthy Wizard, a master of shapes and changes of hue; and he has much lore of herbs and beasts, and birds are especially his friends.” And someone who could never be corrupted by Saruman, which is really, we think, why Saruman calls him a fool.

In an earlier posting, we suggested that Saruman, in his desire to ape Sauron, had created, in Isenguard, a mini-Mordor, just as Iofur Raknison, in Philip Pullman’s The Golden Compass, has turned Svalbard into a shabby ursine mockery of a human palace.

We also suggested that the creators of the Tolkien-derived films, when they began to veer as far from the text as they appeared increasingly to do in the Hobbit films, had become a bit like Saruman themselves, and, like his master, “cannot make real new things of [their] own…” We hesitate to add this, but, could it be that, as in the case of the orcs, they “only ruined them and twisted them…”? (The Return of the King, “The Stairs of Cirith Ungol”). After all, instead of easy plot lines, we have moths, and, in place of worthy, incorruptible wizards, we have gross clowns.

We are reluctant to end on a negative note, however. After all, just as there are the Rohirrim in The Lord of the Rings films, there are those wonderful eagles at the end of An Unexpected Journey, so why not end with them?

If you don’t know Pullman’s His Dark Materials series, we very much recommend them—but with this proviso: in the first and second volumes (The Golden Compass, The Subtle Knife), Pullman’s antagonism towards organized religion is channeled into the “Magisterium”, a believable villainous organization in the world which he has so meticulously and powerfully created. In the third volume (The Amber Spyglass), we feel that that antagonism becomes all-too-apparent and it causes that volume—in our opinion—to lack the more human element and focus of the first two volumes. The first volume can certainly be read on its own and perhaps it says something about the trilogy as a whole that a planned project for filming all three books was eventually cut to a single film of the first book. We recommend this film, as well, but suggest that you read The Golden Compass before you see it.