In our last, we mentioned that we have a second book in the works. It’s part of a series whose titles (and elements) are based upon this mysterious nursery rhyme:

Waft your wings together

To carry the good king’s daughter

The second book in the series, The Good King’s Daughter, is now a complete draft and is currently being given its first editorial run-through. Then it will be checked, rewritten where necessary, then formatted and published, like Across the Doubtful Sea, on Amazon and Kindle, we hope by early March. In the meantime, work goes on for the first in the series, Grey Goose and Gander, as well as on our sequel to Across, Empire of the Isles.

The Grey Goose series takes place in an imaginary medieval Russia, with yagas, talking animals, warriors, invaders like the historical Mongols, magic, saints, singers, and a young woman warrior, Unegen. The story is original, although there are elements from Russian history, as well as from folk tales. 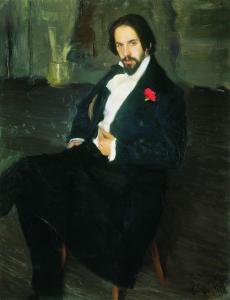 If you look him up on-line, you’ll find out that he was strongly influenced by his exposure to traditional Russian folk art and architecture. Like these: 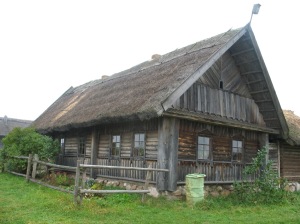 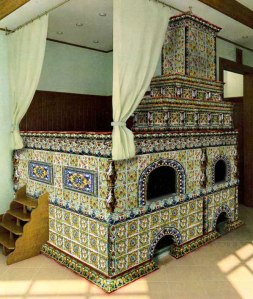 There is scholarly argument over how authentic this sort of thing was by Bilibin’s time: by 1700, Peter the Great was actively westernizing Russia. This lead to everything from laws about dress to regulations about beards (Peter taxed them—but so had Henry VIII, who had one, and Elizabeth I, who did not).

(The second picture is of a government token to show anyone who would ask that you’ve paid the beard tax.)

And here we come to that fork in the road where “strictly accurate” may get in the way of creativity. Anyone who has read The Lord of the Rings knows that Rohan has wide, grassy plains. There are no such plains in New Zealand, so Peter Jackson did what he could to give at least the rolling effect. It’s not grassy, as JRRT described, but we have yet to meet anyone who has complained about the look of Jackson’s Edoras or the Rohirrim (one of our all-time favorite parts of the films, in fact).

Bilibin was inspired by something, no doubt. He wrote about it in Folk Arts of the Russian North (1904). And he produced illustrations like these— 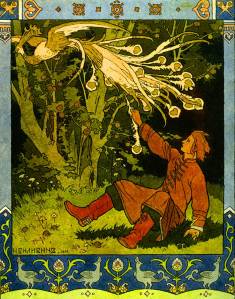 We hope you enjoy them as much as we do and imagine that, in our world of Grey Goose, Bilibin would feel right at home.

Amazon carries Golynets’ Ivan Bilibin, but if you would like to see the illustrator in his natural habitat, you can download Wheeler’s 1912 Russian Wonder Tales (in a 1917 reprinting) with Bilibin’s illustrations at Archive.org for free.