In our last, we discussed less familiar characters in The Lord of the Rings, the Corsairs of Umbar, and what we imagine they could look like.

In this posting, we want to look at much more familiar characters, Orcs—but from the viewpoint of Fangorn. 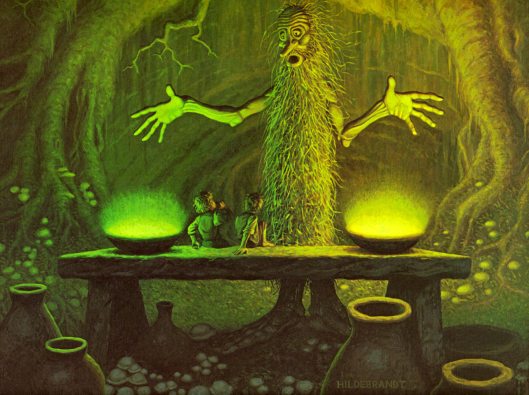 He says of them:

“Maybe you have heard of Trolls?  They are mighty strong.  But Trolls are only counterfeits, made by the Enemy in the Great Darkness, in mockery of Ents, as Orcs were of Elves.”  (The Two Towers, Book Three, Chapter 4, “Treebeard”)

We’ve always been a bit puzzled by this.  “Counterfeit” makes us think, immediately, of counterfeit money.  Here are a pair of US 10-dollar bills:  can you tell the counterfeit (from Old French via a Latin compound, contra, “against” + facere, “make/do”—in Medieval Latin a contrafactio is a thing put against another, something in contrast, thus “imitation”)? 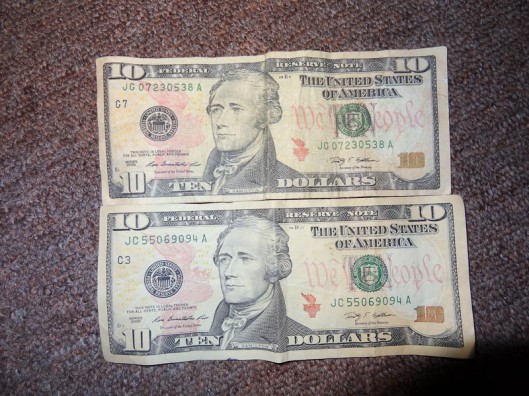 To be a successful counterfeit, normally, it’s necessary that the imitation be as close to the original as possible, as in the case of these two tens.  The US Treasury Department goes to a lot of time and expense to make counterfeiting as difficult as possible 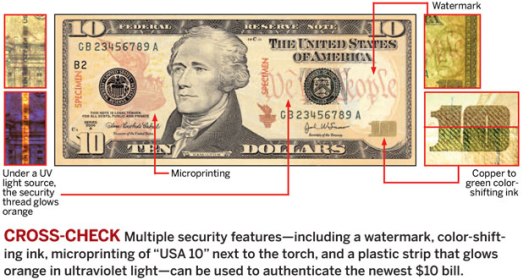 but, if a counterfeiter is successful, he stands to make (in two senses) a lot of money.  He can also cause a great deal of financial damage, breeding distrust in a government’s ability to coin money and to stand behind it.  The more counterfeit money in the system, the more money the government has to back, which, in time, could lead to what is called hyperinflation and can bring a currency to collapse.  When a government does this itself it can cause havoc with a country’s economy, as happened in the Weimar Republic in 1921-1924.  At that time, for complex reasons having to do with paying off the German Empire’s war debts, the government began producing too much paper money and too rapidly.  This caused the money to lose value very quickly, rendering it almost worthless.

It’s no wonder that the penalty for counterfeiting was usually the most severe possible. 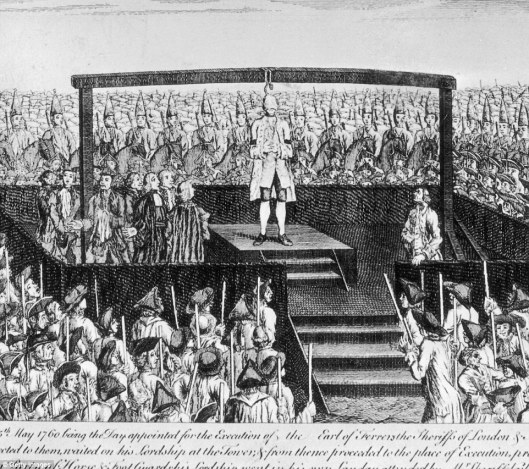 Treebeard’s use of the word “counterfeit”, then, would suggest that what Sauron was doing was trying to make nearly-exact copies of something, either Ents or Elves, in his creation of Trolls and Orcs.  So what do we find when we first see a description of Orcs?

“There were four goblin-soldiers of greater stature, swart, slant-eyed, with thick legs and large hands.”

(The Two Towers, Book Three, Chapter 1, “The Departure of Boromir”)

That’s not much to go on: 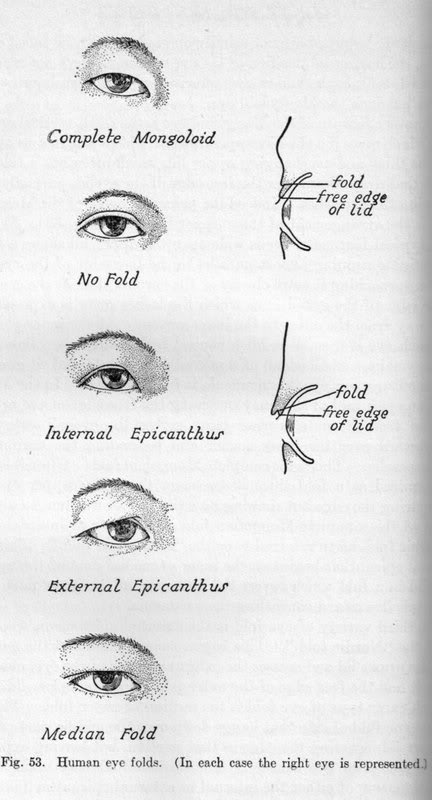 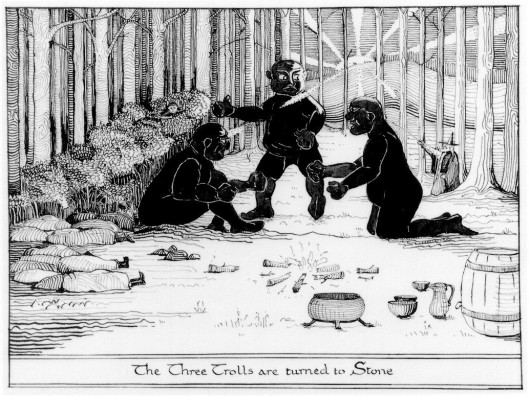 This is a start, but will our next view help?  Pippin and Merry are the prisoners of the Orcs and Pippin is listening to a quarrel between those of Saruman and those of Sauron:

“In the twilight he saw a large black Orc, probably Ugluk, standing facing Grishnakh, a short crook-legged creature, very broad and with long arms that hung almost to the ground.” (The Two Towers, Book Three, Chapter 3. “The Uruk-hai”)

Counterfeit Elves?  Of course we know—also from Fangorn—that perhaps Saruman was up to something more, as Fangorn says of him:

“He has taken up with foul folk, with the Orcs.  Brm, hoom!  Worse than that:  he has been doing something to them; something dangerous.  For these Isengarders are more like wicked Men.  It is a mark of evil things that came in the Great Darkness that they cannot abide the Sun; but Saruman’s Orcs can endure it, even if they hate it.  I wonder what he has done?  Are they Men he has ruined, or has he blended the races of Orcs and Men?  That would be a black evil!” (The Two Towers, Book Three, Chapter 4, “Treebeard”)

This might account for the size of the Uruk-hai, as well as for their ability to endure daylight, but what about the crook-leggedness and “long arms that hung almost to the ground”?

Perhaps here we should remember the end of Fangorn’s description:  “…in mockery of Ents, as Orcs were of Elves.” 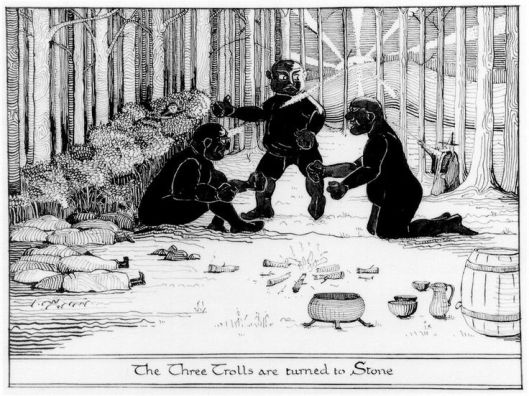 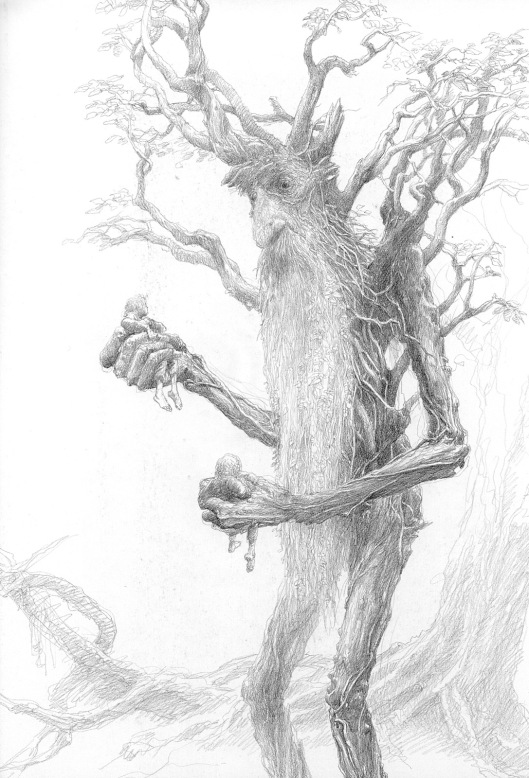 Is this the “mockery”?  It’s certainly not counterfeiting in the usual sense!

Should we understand the same for Orcs vs Elves?  Here are illustrations of Galadriel and Legolas (both by the Hildebrandts): 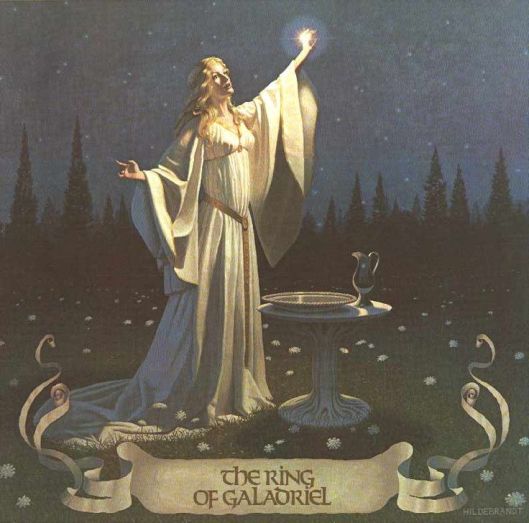 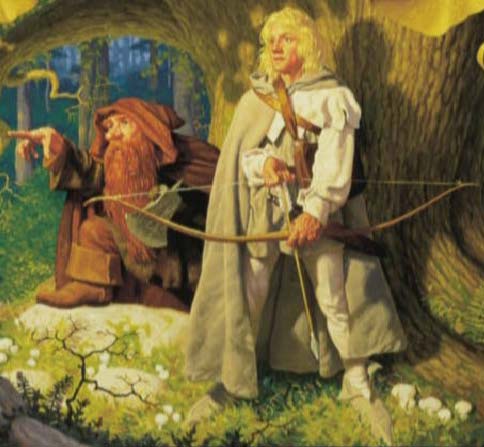 Set those against any modern artist’s view of Orcs and, again, it’s not counterfeiting, in the strictest sense, so we suppose that we have to assume “mockery”—but with the added assumption that Sauron had a very twisted sense of humor.  (There’s also that nasty half-suggestion of Fangorn’s that, since Saruman’s Orcs are behaving more like men, Saruman has been performing genetic experiments, something even Fangorn doesn’t want to think about.) 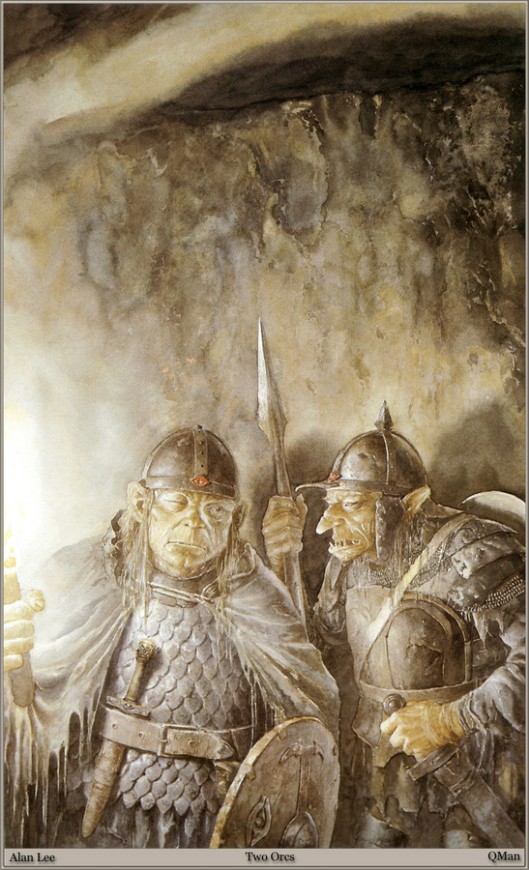 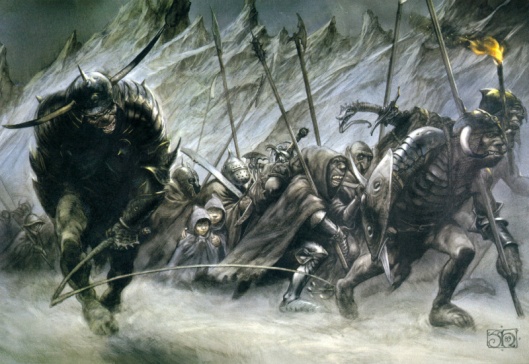 Looking at all of these illustrations, by the way, we were struck by where we’d seen creatures like this before.  Could it be in the works of those strange Flemish/Dutch painters like Brueghel and Bosch? 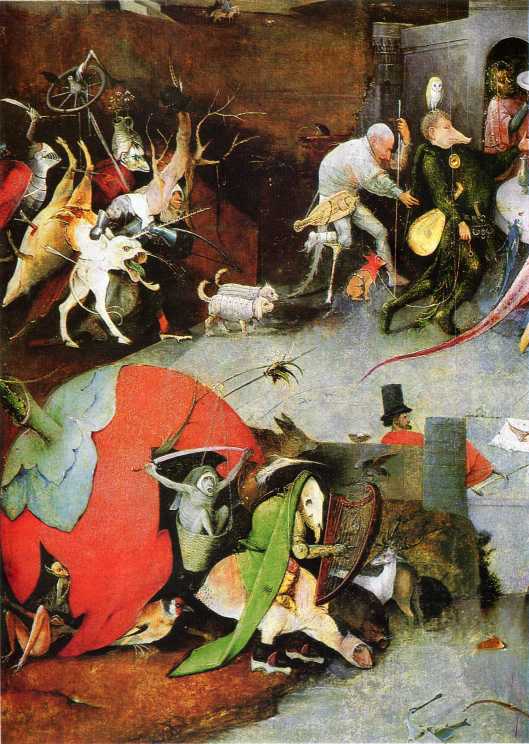 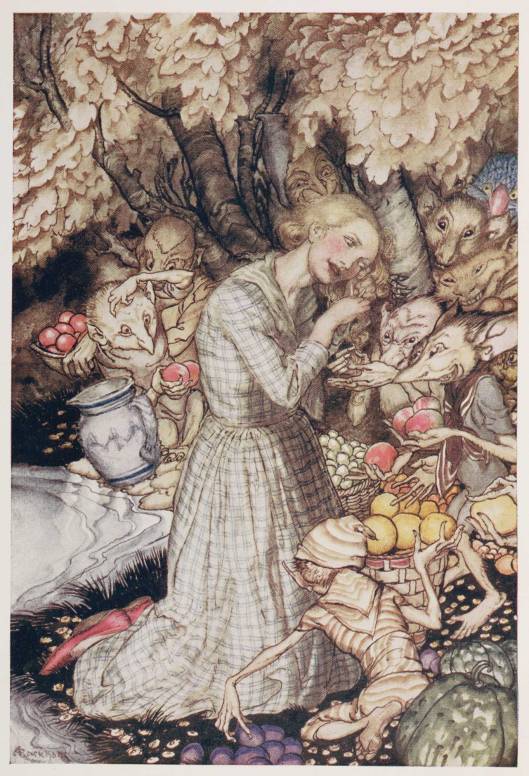 Or the early 20th-century Swedish painter, John Bauer, who, in his depiction of forests was an influence upon JRRT? 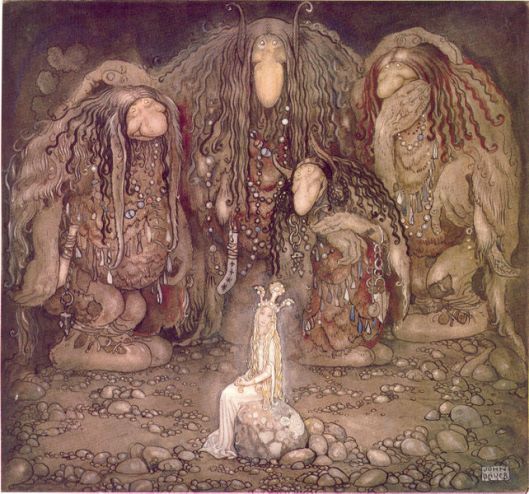 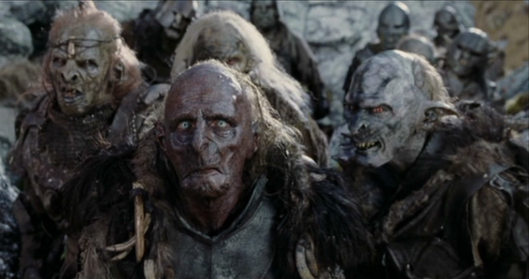 their skin color and general look:  is there a suggestion here of the so-called “Bog People” (about whom we wrote a posting some time ago)—a whole series of bodies, at least one dating from the 4th century bc 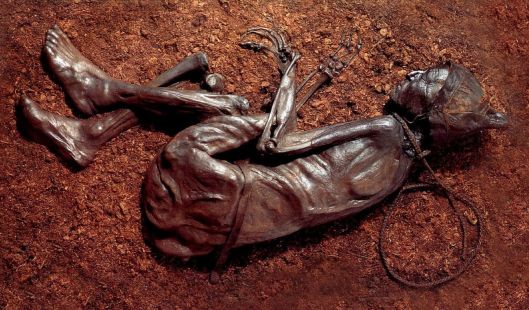 who have been discovered buried in peat bogs (a great preservative) in northern Europe? 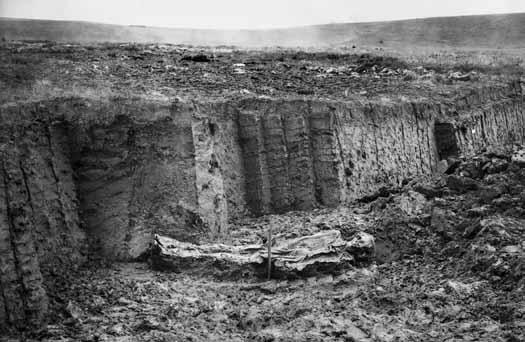 And, in their color and oozy look–not to mention that they seem to move in scuttly groups–is there something cockroachy about them? 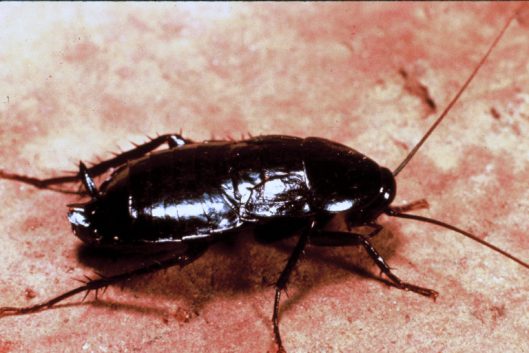 But, just as there is a place Fangorn doesn’t want to go, it’s true for us as well!

You probably spotted this (we have very intelligent readers), but it’s the top 10-dollar bill which is the counterfeit.

It has also occurred to us that JRRT more than once discussed the fact that Sauron, as a lesser deity-figure, could never originate, only copy and “subcreate”—perhaps suggesting another reason for making “mockeries”:  his anger at his inability to do original work?