Welcome, dear readers, to our latest posting. This one is based upon a word, but that word leads us to an interesting question: when you make a new world, do you intend to include anything from your own? Or do things just sort of slip in?

It’s Sam, of course, trying to create a little domesticity while he and Frodo live rough on the trek south from the Morannon.

At Sam’s request, Gollum has gone hunting and has returned with a pair of wild (European) rabbits, or coneys. (“Coney” is a worn-down form of the Latin word cuniculus, “rabbit”, through Old French, the source of so many Latin-based English words.) 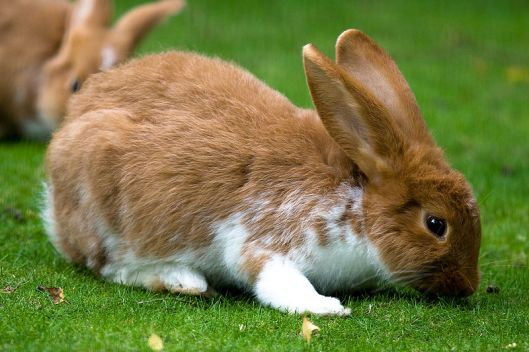 Gollum, who has long forgotten about cooking (although one presumes that, in his distant life among his fellow proto-Hobbits, he wore clothes, lived in a house—or a hobbit hole–and ate bread), is convinced that Sam is going to ruin his catch.

“ ‘Stew the rabbits!’ squealed Gollum in dismay. ‘Spoil beautiful meat Smeagol saved for you, poor hungry Smeagol! What for? What for, silly hobbit? They are young, they are tender, they are nice. Eat them, eat them!’ “

(And here we can hear Sam-I-am from Dr. Seuss’ Green Eggs and Ham, “Would you? Could you/In a car?/Eat them! Eat them!/Here they are.”)

Along with the coneys, Sam would like something more, “taters”, much to Gollum’s puzzlement:

And Sam spells it out:

“Po-ta-toes…The Gaffer’s delight, and rare good ballast for an empty belly. But you won’t find any, so you needn’t look.”

Most readers would know immediately what Sam meant when he said, “Po-ta-toes”, but how about “ballast?”

In a way, it may be odd that Sam would know this word, as it comes from the world of ocean-going ships and Sam has never been closer to bigger water than the Brandywine—and that only near the beginning of The Lord of the Rings.

Ballast is the weight put into the deepest hold of a ship to keep it balanced in the water—especially when it’s empty of cargo. It’s commonly stone and it’s very useful now for underwater archaeologists, since the stone, if it remains in place after a ship sinks, can show the outline of a hull.

So “rare good ballast for an empty belly” gives us the image of a Gaffer kept upright and balanced, moving with potatoes inside him.

Sam has also said, “But you won’t find any, so you needn’t look”: why not?

In our world, before the 16th century, potatoes were only available in South America, in particular in the Inca empire.

This was an elaborate patchwork of smaller peoples controlled by a military group with a capital at Cuzco. 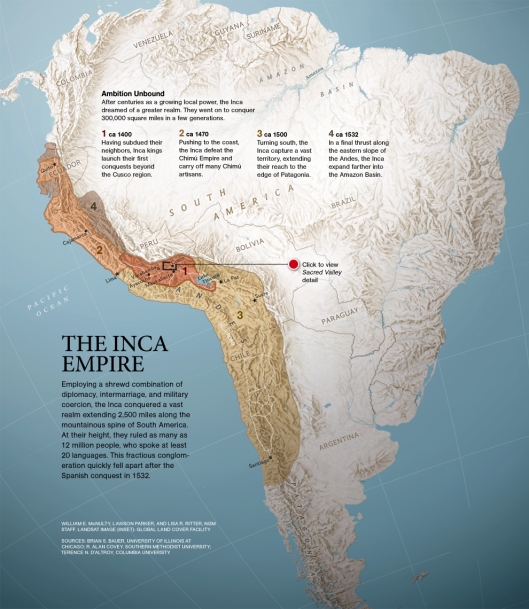 A Neolithic civilization, they were master architects, as may be seen in the remains of the Temple of the Sun, in the capital— 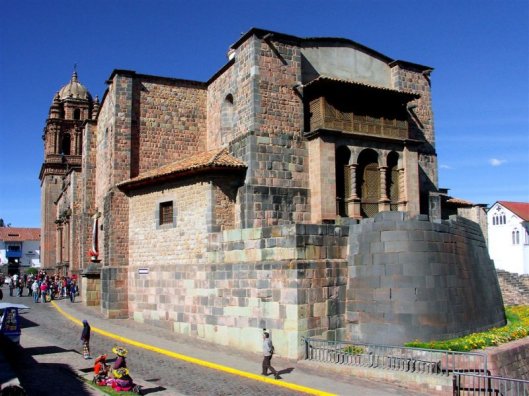 and in what is believed to be a summer palace, at Machu Picchu.

With a king and an army

they controlled much of the west coast of South America from 1438 to 1533, when Spanish invaders destroyed them and their world.

A major food source was potatoes and there were many varieties available—and there still are, more than 1000— 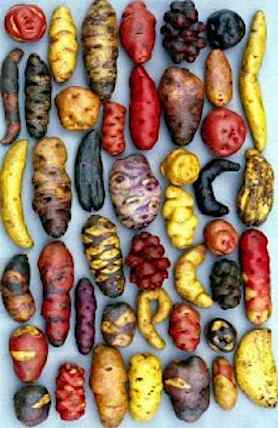 In fact, the Inca even learned how to freeze-dry them to preserve them, a method called chunu.

No one knows for sure when potatoes first came to Europe. It is imagined that Spaniards coming back from the New World would have brought them. In the English tradition, it was Sir Walter Raleigh who introduced them. 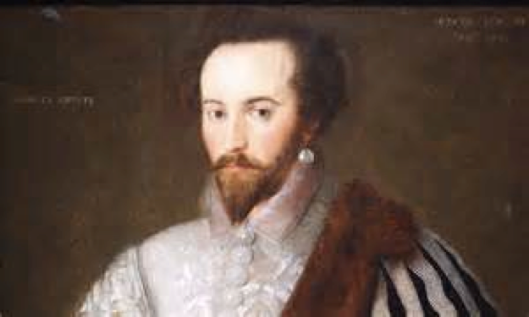 They were then cultivated and rapidly became a major European food source, but they are not a native species and don’t grow wild—leading us to imagine that that’s what Sam is saying: Sam and Frodo and Gollum are in the wilderness and potatoes only grow where they’re planted—suggesting that, in Middle-earth, they are also an import—but from where?

(This reminds us of that moment in the Jackson film, where Sam and Frodo bump into Merry and Pippin in a corn—that is, maize–field. JRRT never mentions maize which, in European history, is also a New World import. This only makes us further wonder what the script writers thought they were doing in removing Pippin and Merry from their proper place in the story…)

There is more of this sort of thing, of course—Hobbits have teatime—we can suppose that it’s something herbal, but real teatime only appeared in England after the regular importation of tea to England from China in the mid-17th century. (For those familiar with it, there is a funny Horrible Histories episode which shows the introduction of tea in Stuart times when, according to the story, people had been refreshing themselves previously with cups of hot water.) 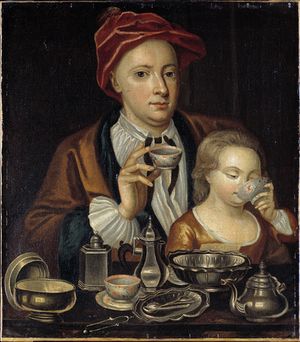 And then there’s tobacco. It’s called that in The Hobbit, but it’s “pipe weed” in The Lord of the Rings. Tobacco is one more import in our world—brought to Europe in the 16th century. Here’s the first known image of someone actually smoking (from 1595). 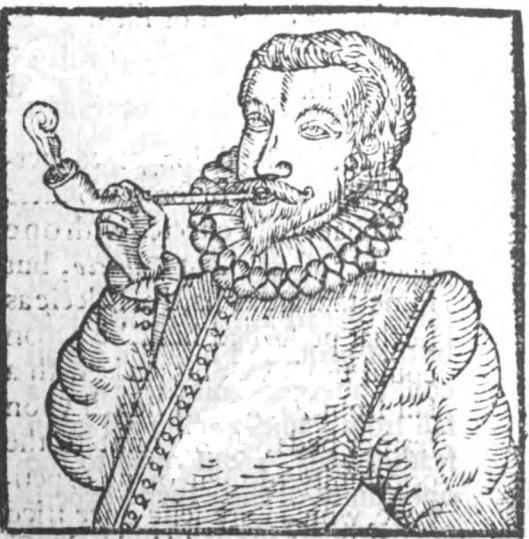 It quickly became so popular that controversy over it, ranging from Tobias Hume’s ( 1579?-1645 ) love song to it, “Tobacco, Tobacco, sing sweetly for Tobacco” (from The First Part of Ayres or the Musicall Humours, No. 3, 1605—you can see the text and score if you Google “Tobias Hume” at IMSLP) to James the First’s condemnation of it, A Counterblaste to Tobacco (1604), which you can actually read if you Google “A Counterblaste to Tobacco”.

When JRRT was revising The Hobbit for its republication in 1966, he made a number of changes to the text, but some things remained, such as teatime, and even the image of a railroad train—“At may never return he began to feel a shriek coming up inside, and very soon it burst out like the whistle of an engine coming out of a tunnel.”

Douglas Anderson argues, in Note 35 of Chapter 1 of The Annotated Hobbit, that, in the case of the railroad, “This usage need not be viewed as an anachronism, for Tolkien as narrator was telling this story to his children in the early 1930s, and they lived in a world where railway trains were an important feature of life.” (The Annotated Hobbit, 47-48.) This is never really stated, in fact, in the Hobbit text, but the tone of the narration—which JRRT came to dislike—would suggest something of the sort. As for The Lord of the Rings, we have no explanation. Some items are never explained, they’re just there.

And, of course, there’s this:

“I’ll cook you some taters one of these days. I will: fried fish and chips served by S. Gamgee.”

Perhaps this is in Hobbiton? Bywater? Michel Delving?