Everyone at all interested in the works of Tolkien knows this passage (and many could recite it by heart, we’re sure):

“Three Rings for the Elven-kings under the sky,

Seven for the Dwarf-lords in their halls of stone,

One for the Dark Lord on his dark throne

In the Land of Mordor where the Shadows lie.

In the Land of Mordor where the Shadows lie.” LoTR 50.

But why a ring? Since the Ring is about power, why not something which looks like power:

a sword, for example 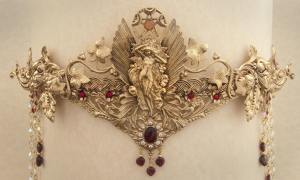 or even, considering Tolkien’s own mythology, a silmaril. 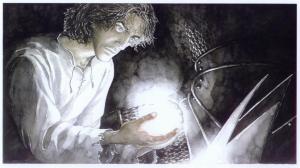 In The Hobbit of 1937, the Ring was originally simply a magic ring right out of folk and fairy tales, with apparently one gift, invisibility, for which Gollum treasures it.

As is well known, Tolkien reconsidered its powers and, as The Lord of the Rings grew, the ring became the Ring, and the central focus of the sequel to the earlier book. By the beginning of the 1950s, he states (in a letter to Milton Waldman dated by Carpenter/C. Tolkien as “probably written late in 1951” LTR 143):

“the primary symbolism of the Ring, as the will to mere power, seeking to make itself objective by physical force and mechanism, and so also inevitably by lies…” LTR 160.

Although this tells us something about the force within the Ring, it doesn’t really explain why a ring.

Rings are an ancient status symbol, certainly. The Romans used them as one of the ways to show the class of a person: senators wore gold ones (although there is an old story that, originally, Roman senators wore rings made of iron)

and the other free classes wore any metal they chose.   Tolkien would have had a vivid idea of the inherent status in a ring from Old English, as one of the kennings (poetic metaphorical phrases) for a great lord was “ring-giver”

—just as Sauron gives rings to the ancient kings and so holds their allegiance long after their natural lives should have ended.

This is echoed in “and in the darkness bind them” , which brings us back to those verses with which we began.

In them, the Ring’s powers are clearly laid out (rather like Saruman’s claimed goals, “Knowledge, rule, order”): rule, find, bring, bind.

As Gandalf tells us, the primary reason for the creation of the Ring was, in fact, to rule, both the other rings and, through them, Middle-earth and its peoples: Elves, Dwarves, Men. To do so, Sauron endowed the Ring with much of his own power, a perfect example of his arrogance, depriving himself of power he might need, clearly convinced that he would suffer no harm from its lack.

As he endows the Ring, it seems that he—intentionally?—passed on to it a small bit of his self-will. Unlike inanimate objects in our world (and we presume in Middle-earth, too), the Ring not only shows purpose, but can act upon it.

“A Ring of Power looks after itself…It was not Gollum, Frodo, but the Ring itself decided things. The Ring left him…The Ring was trying to get back to its master.” LotR 55.

To do so, it uses another of its powers, it brings people to use as vehicles, discarding them when they have served its purpose.

“It had slipped from Isildur’s hand,” says Gandalf (a hand already under the Ring’s control, as it couldn’t force itself to destroy the Ring when it had the chance) and betrayed him; then when a chance came it caught poor Deagol, and he was murdered and after that Gollum, and it had devoured him. It could make no further use of him: he was too small and mean…So now, when its master was awake once more…it abandoned Gollum, only to be picked up by…Bilbo.” LotR 55-56.

To acquire such vehicles, the Ring uses a third power, finding. Gandalf’s list suggests that that power entails some innate ability to sense who will be most attracted to it. They appear to be rather a wide assortment, from the heir to the throne of Gondor to two proto-hobbits. And there are also those not on Gandalf’s list: Saruman and even, to some degree, Galadriel. As for Gandalf himself, he, like the Lady of Lorien, is wise enough to avoid the ultimate temptation, as is Faramir, perhaps because, as his father accuses him, he has been Gandalf’s pupil and has acquired some of his awareness both of events and of himself.

Our list would not be complete, however, without Frodo and Sam. It is hard to imagine that the Ring has picked them: Frodo, after all, has inherited it. This doesn’t mean that he is not influenced by it, even, at the end, sounding more like Isildur than himself in his refusing to destroy it, suggesting that, even by inheritance, someone can be found, brought, and ruled. And Sam? He holds it only briefly, but surrenders it so easily that it appears to have little ultimate power over him, something which he shares with Tom Bombadil, perhaps because both are grounded—quite literally—in Middle-earth. It is no surprise that Galadriel gives him a gift for growing things and that, in his consolation of Sam, Frodo says that he will be “the most famous gardener in history” (LoTR 1029). As for Bombadil, it would appear that the same sort of protection which keeps Sam from being found, brought, and ruled keeps him safe. When he holds up the Ring and looks through it, for a moment we might see that, for him, the symbolism of the “will to mere power” means nothing and, instead, he sees it only as an empty metal band.

For others, from the Nazgul to Frodo, who never feels whole again, the fourth power, binding, has done its job and also perhaps, in doing so, answers the question, why a ring?

What better binder than a perfect circle, seemingly blank, but with a hidden message, almost a spell, and which, when put on, pulls you from the daylight world and, which, worn too long, can keep you there forever?