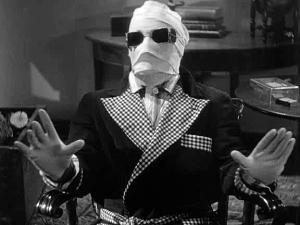 Imagine this—and we’re sure it’s happened to you. You’re working, somewhere by yourself, maybe downstairs. It’s late. Very. Everyone else is long asleep. And you suddenly, for no easy reason, look up. It’s nothing. Nothing…visible. Is it something you heard, then? But what? Is it even a sound—and certainly not something distinctive, like things in old horror movies—chains, groans, thumping footsteps from overhead—but maybe something very quiet—almost nothing more than the disturbance of familiar patterns like appliance hums. In fact, maybe it’s the silence under the familiar patterns which magnifies it. No matter what it is, it’s there. And, at the moment you actively take notice, the creepy feeling catches hold, and you sit, listening ever more intently. (Holding your breath is optional, but a popular choice for times like this.)

Recently, we wrote about two kinds of villains, those we called “open-ended” and those we called “terminal”. Another classification which might spring from that eerie feeling described above: villains visible and villains invisible.

Let’s return for a moment to that not-so-quiet place where your work was disturbed by…what? If you were a small child, perhaps it would be easy to give it shape from a fairy tale book you’d read, or a movie you’d seen. One of us, for example, was haunted in far childhood by a Hal Foster Prince Valiant illustration in which Prince Valiant has been drugged by Morgan le Fay. Every night, creatures like those in the picture would creep out of the eaves doors at the far end of the room and clutch at the bottom of the bed…

As we’re adults (sort of), however, do we necessarily embody whatever it is at such moments? And there’s that second question: do we want to? For all that we may be creeped out, is there some odd, perverse pleasure in being creeped out? Certainly those who make horror movies think so! But is there a difference between seeing what scares you and only feeling it?

With that in mind, suppose that you’re not you, spooking yourself (yes, pun intended) late at night in your living room, but Tolkien constructing a long and complex combination of myth and adventure. You’ve got a wide assortment of protagonists, beginning with some of those beings you created in an earlier story, Hobbits.

What about villains, antagonists? As we’ve discussed in a previous posting, they are necessary to provide friction, that resistance which pushes against the heroes and creates the motion which is a plot.

Commonly, such a figure is visible, like Lucifer, in Paradise Lost.

Or he’s very visible, like Ravana in the Ramayana, with his ten heads. 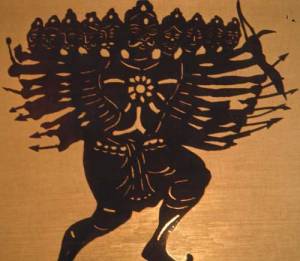 For us, however, this is to risk circumscribing the villain, his visible body suggesting his visible limits. After all, it was a Sauron with hands who lost the Ring to a sword blade. To have a body, then, is to be vulnerable (literally, in the case above) and, more perhaps more important, in terms of story, more predictable, more bound by conventions.

You (as JRRT) create Sauron, then, who once had a body, but now you make him nearly disembodied, being represented physically as a single, fiery eye.

This gives the effect of a brooding, ever-watchful presence, a bit like all of those posters in 1984’s London of Big Brother.

This presence can be captured in the text in all sorts of ways, both direct and indirect. You have only to look up “Sauron” in the index to The Lord of the Rings to understand this: “Dark Lord, Enemy, Black One, Black Hand, Black Master, Base Master of Treachery, Dark Power, dark hands of the East, Nameless One, etc.”

A brooding presence, however, is a real challenge for anyone trying to transfer The Lord of the Rings to the screen, which is why, after the previous defeat of Sauron, in which he appears as a huge being in black armor, he is reduced to that eye, sometimes captured in a palantir 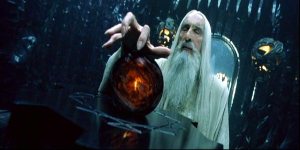 Or Galadriel’s mirror, though, more often, as Sam and Frodo come closer to their goal, as the equivalent of a tower-mounted searchlight.

Film and fiction are different media, with different needs and tools to satisfy those needs, as the script writers never tire of explaining to us. In our opinion, however, this extremely literal depiction so strongly smacks of old black-and-white prison escape films,

that we wish that those script writers could have left the Dark Lord offstage entirely, if this is the best they could do.

With our feeling that an bodyless villain might be more powerful here than an incarnated one—remember feeling spooked at night by a subtle change in the ambience?—we would wish that the writers had been a bit more imaginative—and had read their author a little more closely. After all, he had plenty of good ideas about how to depict villains. And it is perhaps a sad commentary on their work that, increasingly, in their years of using JRRT, they abandoned him, choosing, instead, to bloat his story and turn it in directions he clearly never intended. Why not, for example, do as Tolkien did and mirror the villain not only in that long list of titles, but also in the actions and words both of his subordinates and his opponents? Would this have worked? Perhaps a reference to the amount of time “You Know Who” appears on-screen in the first Harry Potter movie in contrast to how often he is mentioned would suggest how this might have worked.

As for villainous subordinates and their actions, we’ll have more to say about them in our next.

Thanks, as always, for reading. Remember: we want to encourage discussion and debate. If you agree with us, say so. If you don’t, say so and we can have fun working through our views.