We’re in the third installment of a little series about sentries and patrols in Middle-earth.

We had begun in the first installment in the Shire, with the shirriffs, then the watchman in Bree, then the watcher in the lake at the western gates of Moria, then the Elves of Lorien under Haldir, finishing with the Argonath, the biggest sentries of all.

Now, as we move south, we encounter our first patrol.  From his experience in the Great War, 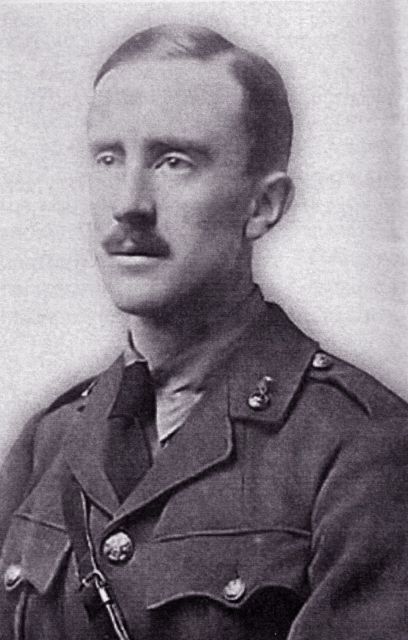 JRRT would have been very familiar with groups of armed men spreading out across the countryside, either slipping into enemy territory or simply guarding the edges of their own.

And patrols could be on horseback, as well as on foot—and not necessarily friendly, either.

As Aragorn, Legolas, and Gimli cross northern Rohan in their attempt to rescue Merry and Pippin, they run into one of these patrols:  Eomer and his Rohirrim. 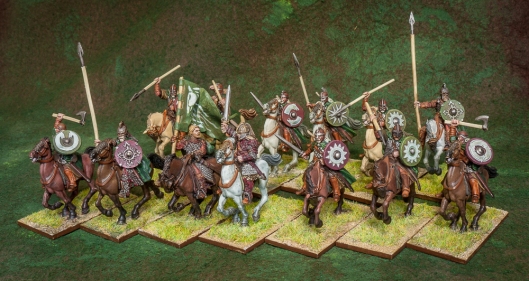 As we mentioned in our second installment, when it comes to The Lord of the Rings, encounters with watchers of any sort often lead to developments in the plot and this is certainly true when the three meet with Eomer.  They have pursued the Orcs for days in hopes of rescuing Merry and Pippin, only to be told that the band in which the two hobbits were being kept prisoner has been destroyed completely:

“ ‘Did you search the slain?’” Aragorn asks, explaining, “ ‘Were there no bodies other than those of orc-kind?  They would be small, only children to your eyes, unshod but clad in grey.’

‘There were no dwarves nor children,’ said Eomer.  ‘We counted all the slain and despoiled them, and then we piled the carcasses and burned them, as is our custom.  The ashes are smoking still.’” (The Two Towers, Book Three, Chapter 2, “The Riders of Rohan”)

Aragorn is unshaken in his belief that the two may still be alive, however, and the three will continue their search, but now, as Eomer has loaned them horses, so he has lain an obligation upon Aragorn:

“ ‘You may go; and what is more, I will lend you horses.  This only I ask:  when your quest is achieved, or is proved vain, return with the horses over the Entwade to Meduseld, the high house in Edoras where Theoden now sits.  Thus you shall prove to him that I have not misjudged.  In this I place myself, and maybe my very life, in the keeping of your good faith.  Do not fail.’ “

And so, rather than to continue to Minas Tirith, as Aragorn had planned, he and his two companions are to be diverted to the capital of Rohan, instead.  Meeting Gandalf in their search,

they fulfill Aragorn’s promise and are met by two separate sets of watchmen.  First, at the gates of Edoras:

“There sat many men in bright mail, who sprang at once to their feet and barred the way with spears. ‘Stay, strangers here unknown!’ they cried in the tongue of the Riddermark, demanding the names and errand of the strangers.” (The Two Towers, Book Three, Chapter 6, “The King of the Golden Hall”)

In his reply, Gandalf speaks in the language of Rohan, but wonders “Why do you not speak in the Common Tongue, as is the custom in the West, if you wish to be answered?”

To which one of the guards replies:  “It is the will of Theoden King that none should enter his gates, save those who know our tongue and are our friends.”

[This use of language as a screening test, by the way, reminds us of a well-known story from the Hebrew Bible, in which, when the Ephraimites were defeated in battle and attempted to escape over the Jordan River, their opponents, the men of Gilead, stood at the crossings and, whenever a strange man tried to ford  the river, the Gileadites would demand that he pronounce the word “shibboleth” (which means “a stalk of grain”, among other things).  In the Ephraimite dialect of Hebrew, the consonant combination “sh” was said “s”, and so, at least as the story goes, every Ephraimite warrior who slipped and said “shibboleth” was immediately revealed to be an enemy soldier and was captured and killed.  (See The Book of Judges, Chapter 12)]

Aragorn has already been warned by Eomer that all is not well in Edoras, as he has said about Saruman, who has become an enemy of Rohan, “His spies slip through every net, and his birds of ill omen are abroad in the sky.  I do not know how it will all end, and my heart misgives me; for it seems to me that his friends do not all dwell in Isengard.”

This confrontation between guards and Gandalf immediately makes Gandalf wary, especially when he hears from one of the sentries that:

“It is but two nights ago that Wormtongue came to us and said that by the will of Theoden no stranger should pass these gates.”

Knowing from this that Wormtongue is inserting himself into Theoden’s actions prepares Gandalf to deal with the next sentry, the Doorward Hama.

“Then one of the guards stepped forward and spoke in the Common Speech.

‘I am the Doorward of Theoden…Hama is my name.  Here I must bid you lay aside your weapons before you enter.’ “

[If you read us regularly, you’ll recognize this figure from Beowulf.  There he is named Wulfgar, and he is the herald of King Hrothgar.  See Beowulf, 330-355.]

Although Legolas easily puts aside his weapons, Aragorn is a bit stiff-necked, refusing, at first, to put down Anduril until Gandalf offers his sword, Glamdring, followed by Gimli, who places his axe with the other weapons.  Hama hasn’t finished, however:

“The guard still hesitated.  ‘Your staff,’ he said to Gandalf.  ‘Forgive me, but that too must be left at the doors.’ “

Gandalf appears to object, on the grounds of his age:

“Foolishness!…Prudence is one thing, but discourtesy is another.  I am old.  If I may not lean on my stick as I go, then I will sit out here, until it pleases Theoden to hobble out himself to speak with me.”

Hama has a moment of proper doubt—“  ‘The staff in the hand of a wizard may be more than a prop for age.’ “—but he still allows Gandalf to carry his staff, which he then uses to disarm Grima Wormtongue and break the spell which has prematurely aged Theoden.

We have now added three more watchmen or groups to our growing list, all from Rohan and each meeting having had an effect upon those involved.  In the final installment of our series, we’ll leave the grassy plains of the Riddermark for Gondor, then cross the Anduin into a very different world.

Till then, thanks, as ever, for reading and