Not long ago, we visited Meduseld for a look at Grima, the fifth-columnist.  Today, we’re back, but, instead of scrutinizing the staff, we’re examining the décor—

“Many woven cloths were hung upon the walls, and over their wide spaces marched figures of ancient legend, some dim with years, some darkling in the shade.  But upon one form the sunlight fell:  a young man upon a white horse.  He was blowing a great horn, and his yellow hair was flying in the wind.  The horse’s head was lifted, and its nostrils were wide and red as it neighed, smelling battle afar.  Foaming water, green and white, rushed and curled about its knees.

‘Behold Eorl the Young!’ said Aragorn.  ‘Thus he rode out of the North to the Battle of the Field of Celebrant!’” (The Two Towers, Book Three, Chapter 6, “The King of the Golden Hall”)

By “woven cloth”, we presume that JRRT means a tapestry, a decorative wall-hanging, like these— 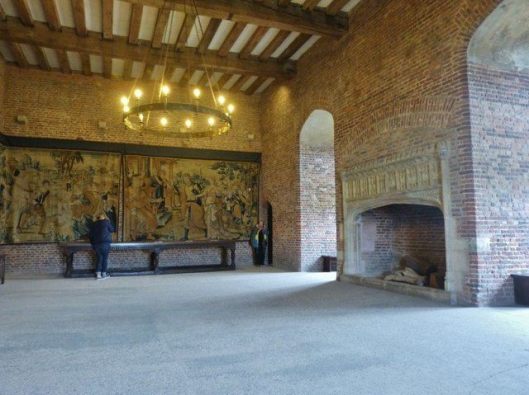 In the western Middle Ages and Renaissance, even wealthy walls—like those in castles—could simply be stone and such tapestries could act both to decorate and to act as a barrier between cold wall and (potentially) shivering inhabitants.

For those making such things, the possibilities for using them as story-telling spaces inspired such works as the famous “Hunt of the Unicorn” series of tapestries, now housed in the Cloisters, a museum in New York City. 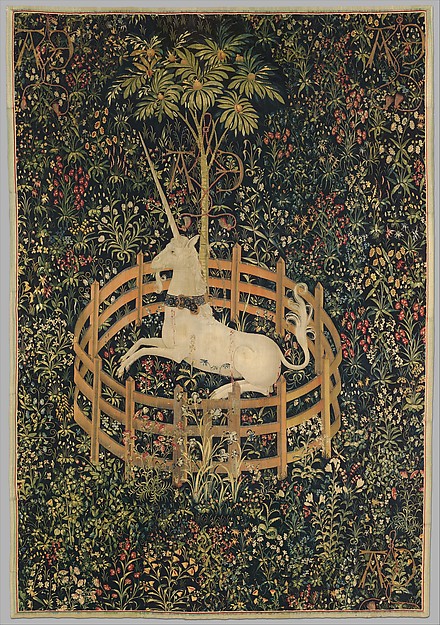 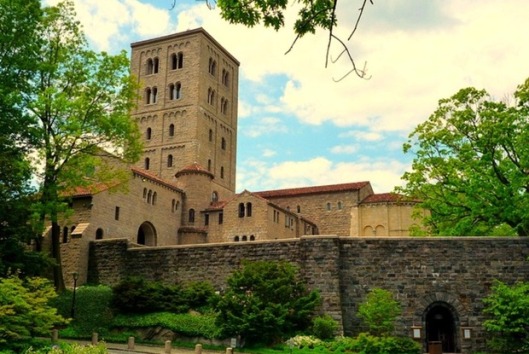 The description of Eorl makes us think of medieval stag hunt illustrations, where hunters may be seen blowing horns—like this one. 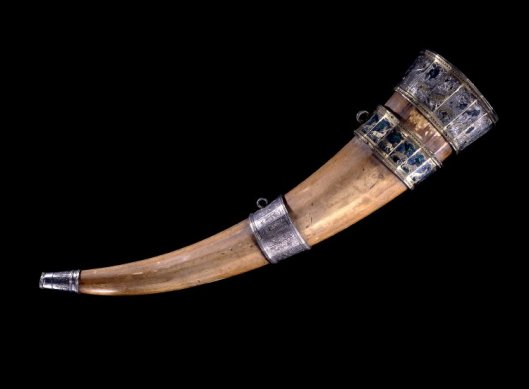 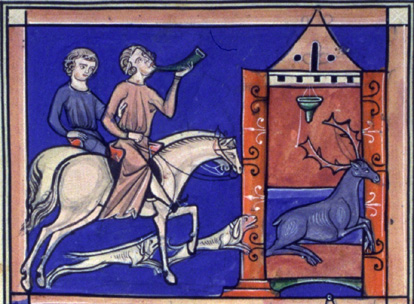 But the fact that he was riding to battle also made us think of wall decorations of a military/historical nature through the centuries, starting with ancient Egypt, where Rameses II (1303-1213BC) had himself depicted on walls in various military actions— 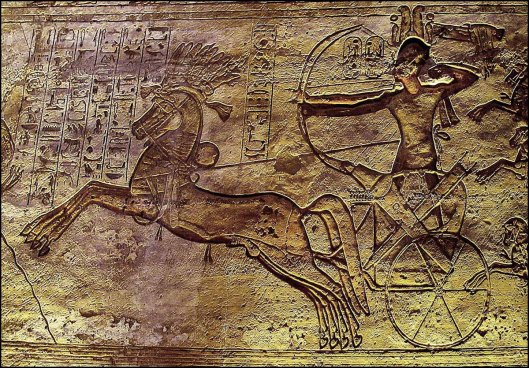 Or the Assyrians, who were not only enthusiastic (gross understatement) about war, but also about depicting themselves engaged in it. 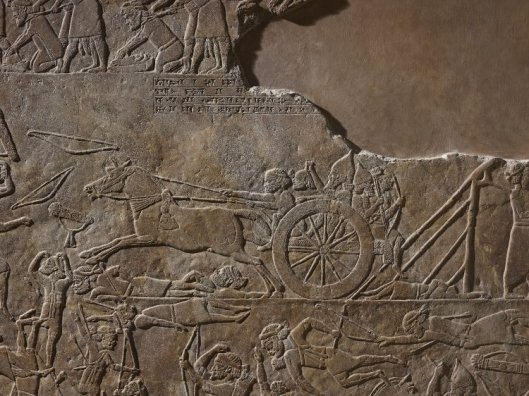 As you can see, although these appear on walls, they are not hangings, but reliefs—that is, shallow carvings.  The Egyptian reliefs could be brightly painted, as is that reconstruction of Rameses and the Nubians, the first of the two Rameses illustrations.  It appears that some of the Assyrian reliefs were also colored—here’s a PDF: BMTRB 3 Verri et al, of an interesting article from the Technical Research Bulletin of the British Museum on the subject.

From colored reliefs, we can jump to colored tiles (called tesserae), with the famous Alexander Mosaic. 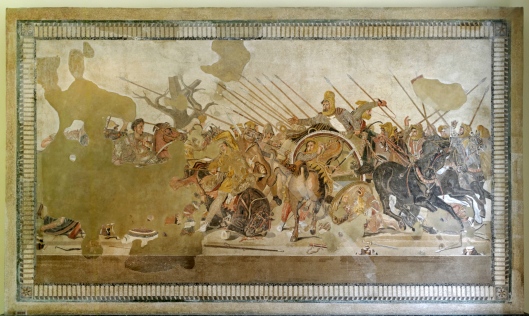 This depicts Alexander the Great nearly confronting the Persian king, Darius III, at the Battle of the Issus (333BC) and what amazes us is that this was originally not on a wall, but on a floor, in the so-called “House of the Faun” in Pompeii.

It is believed that this was based upon an early 3rd-century BC painting and, to our eye, it still looks very much like the painting it may have come from (which was, presumably, on a wall, not a floor).

For battle scenes on cloth, we return to the medieval world and something we’ve mentioned before, the so-called “Bayeux Tapestry”.

We say so-called because it’s not really a tapestry—which would have been woven on a loom—but, instead, a giant (230ft/70metres) embroidery.  Here’s a detail so that you can see how an embroidery is made up of stitching on a (in this case) plain linen strip. 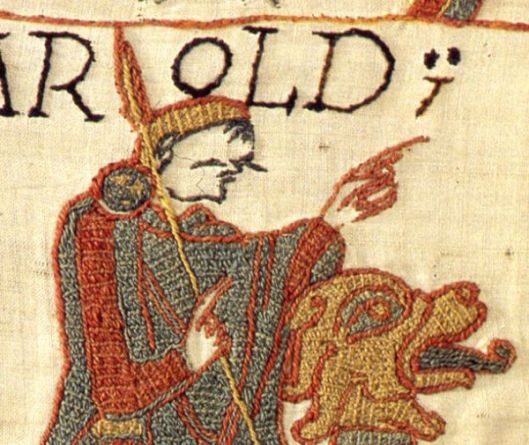 This is really an astonishing piece of work—so far as we know, nothing else like it has survived from medieval western Europe:  a massive history of the invasion of England in 1066, including events leading up to it, in 50+ scenes.  We see everything from architecture 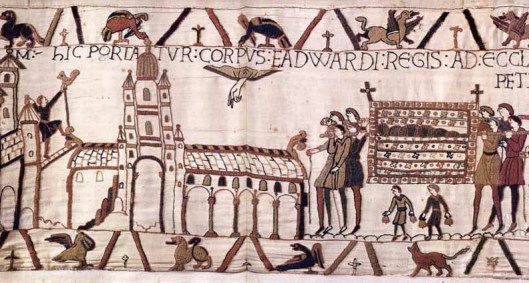 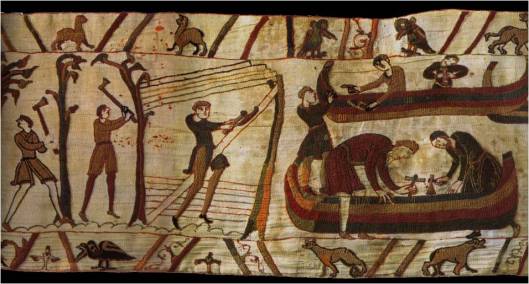 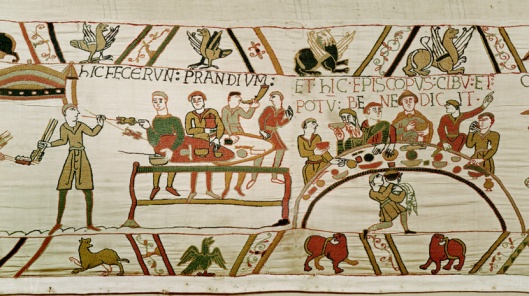 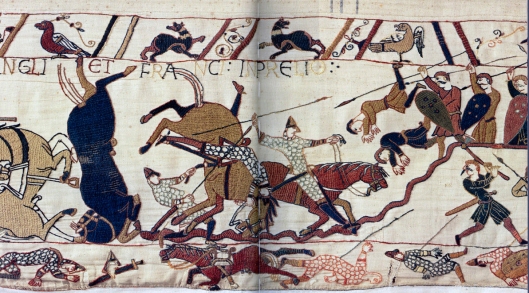 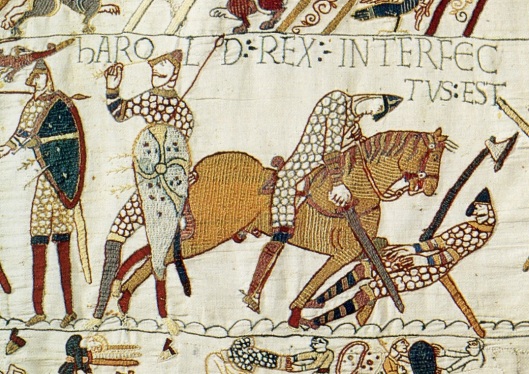 and even includes Halley’s Comet. 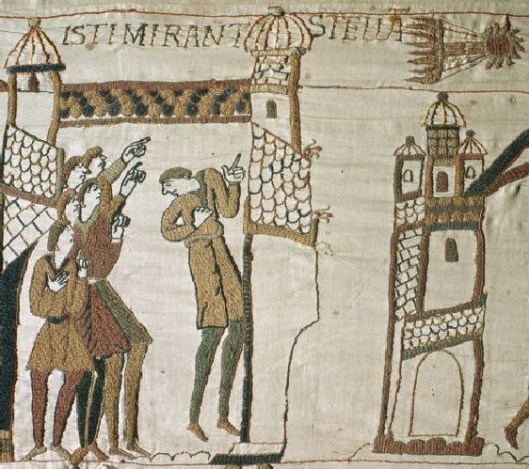 JRRT certainly knew about the Bayeux piece—he mentions it in his letters—but the richness of his description doesn’t really match the relative spareness (for all its detail) of that embroidery, so we wonder what he might have had in mind?   Late medieval tapestries would have had the lush look—

This is one of a set of 15th-century tapestries illustrating the Trojan War.  You’ll notice that, like the Bayeux Tapestry 3 centuries earlier, there are labels (tituli, they’re called).  In the case of the Eorl tapestry, it’s Aragorn who provides the explanation, suggesting that there is no caption and Aragorn, being Aragorn, simply knows the story.

For an eye-popping battle scene, however, we would point to the set of 7 tapestries of the Battle of Pavia (1525) woven in Brussels between 1528 and 1531 and now in the Museo Nazionale di Capodimonte in Naples.  Here’s just one example—can you imagine the same having been woven for the assaults on Minas Tirith or Helm’s Deep?  (Here’s a LINK, by the way, to a very detailed article on the subject of these wonderful works.)

But such pieces as these are so elaborate that, for all of their great art, they don’t provide quite the parallel we’re looking for, perhaps because all of the larger ones seem to be filled with people and movement and what JRRT describes is a single figure—almost like a standard, rather than a tapestry—something like this one (although we imagine the original to be facing to the right and the field to be green—oh, and of course he has that horn, but you get the idea).

And we do have this example.  It comes from a site called “Elvenesse”. 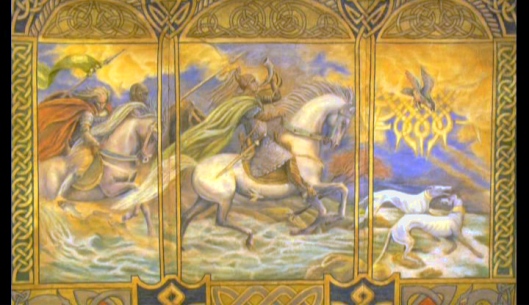 It looks more like a religious triptych than a tapestry to us, 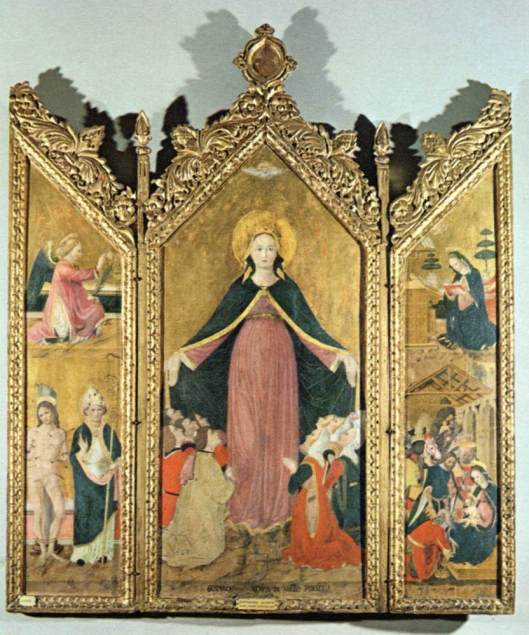 but it certainly is going in the right direction.  What do you think, dear readers?

And thanks, as always, for reading!