In a posting from January, 2017, we discussed the idea of a “mathom house” at Michel Delving in the Shire.  We know about this place from the Prologue to The Lord of the Rings:

“So, though there was still some store of weapons in the Shire, these were used mostly as trophies, hanging above hearths or on walls, or gathered into the museum at Michel Delving.  The Mathom-house it was called:  for anything that Hobbits had no immediate use for, but were unwilling to throw away, they called a mathom.  Their dwellings were apt to become rather crowded with mathoms, and many of the presents that passed from hand to hand were of that sort.”  (Prologue, The Lord of the Rings)

Rereading this passage this time, we were caught by two things:  “some store of weapons” and “Their dwellings were apt to become rather crowded with mathoms” because, put together, they sound like part of the description of the personal Mathom-house of the original inspirer (we would say) of adventure-writing in English, Sir Walter Scott.

Trained to become a lawyer, Scott had lived for some years in several houses in Edinburgh, for much of his later life at Number 39, North Castle Street–

Although he began his rise to literary fame with the publication of The Lay of the Last Minstrel, a long poem, in 1805, 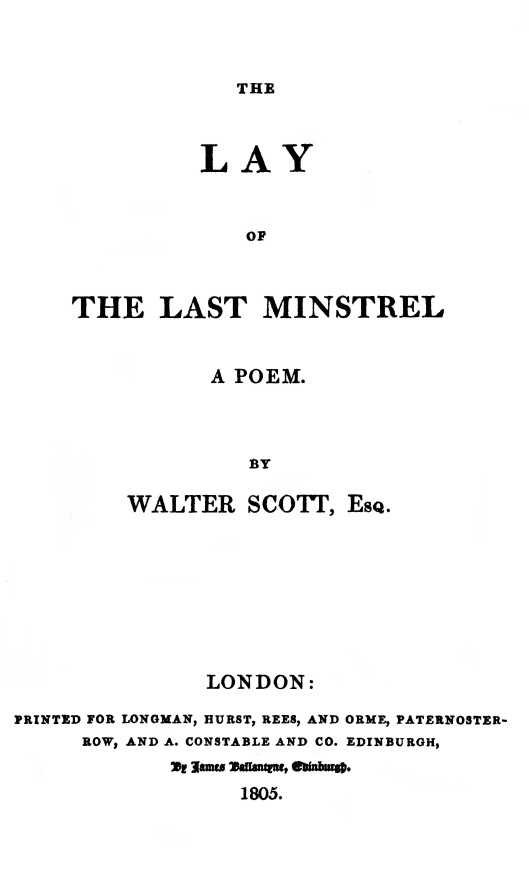 money began to pour in with his first novel, Waverley, published anonymously, in 1814.

(What a great illustration, by the way—both the first edition and the manuscript.)

Because his legal work required him to have a residence outside Edinburgh, Scott had rented this, at Ashestiel, from 1804-1811. 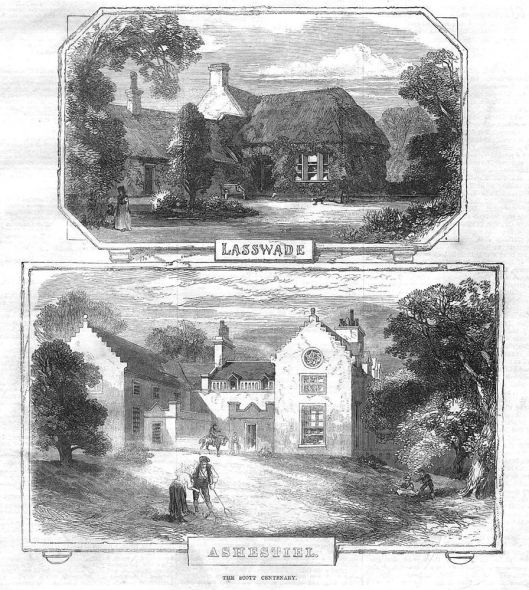 When the lease was up, he then invested in this rather modest farm house at what was called “Cartley Hole”, which locals called “Clarty Hole”, “clarty” being a Scots word for “mucky”, suggesting that our illustration is prettier than the actual place.

More commercially successful novels and an eventual baronetcy gave Scott grander ideas and he began to rebuild—and rebuild—the house, as well as changing its name to the more dignified “Abbotsford”, as it was near the ruins of the 12th-century Melrose Abbey. 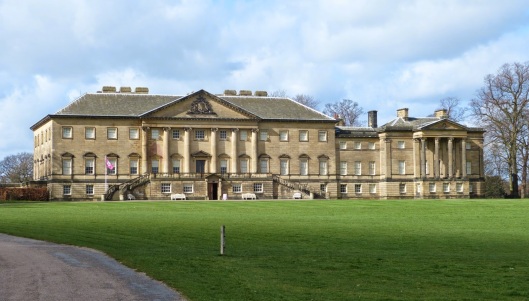 but Scott, no doubt influenced by the Gothic ideas of people like Horace Walpole

and his Strawberry Hill 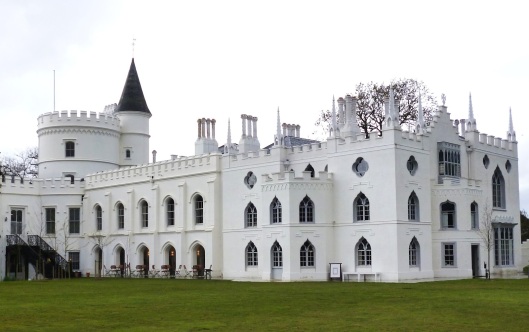 fixed upon a design which, in time, was not only bigger, but Gothic—and Scottish, in the style called “Scottish Baronial”, like this castle at Craigievar, completed in 1626.

In a way, such a choice makes sense:  many of his novels have Scots locations and they made him wealthy enough to build such a place.

This is perhaps the first photographic image of Abbotsford.  It dates from 1844 and is by the English inventor, as far as we currently know, of photography, Henry Fox Talbot.

And here is a modern image. 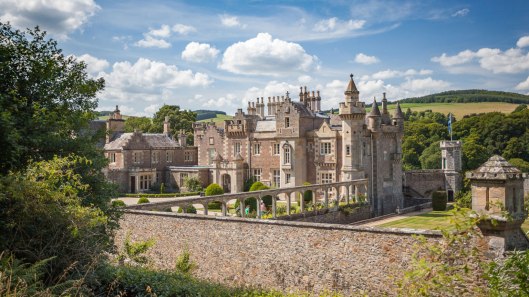 The outside of Abbotsford is striking enough, but it’s what’s inside which made us think of a Mathom-house.

There is seemingly an endless “store of weapons”. 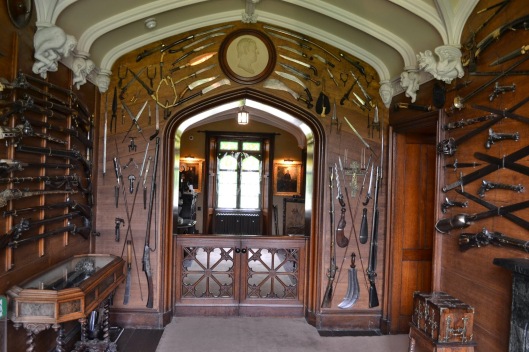 And then there are all of those other things.  A lock of Napoleon’s hair. 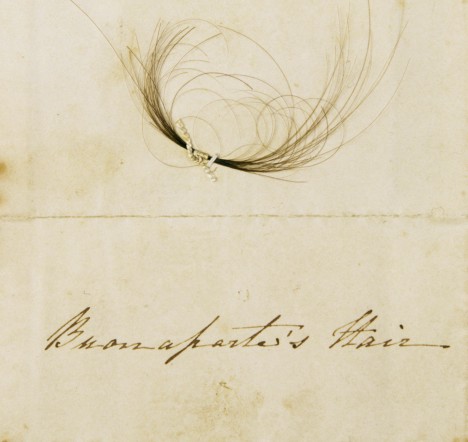 The sword of a 17th-century Scottish hero, the Marquis of Montrose.

And even souvenirs he had picked up from the battlefield of Waterloo, which he had visited only a short time after the battle. 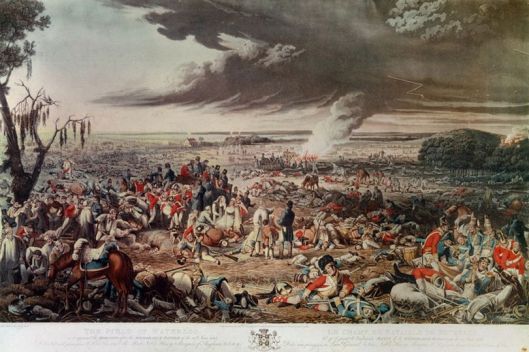 but to a French/Polish lancer

we wouldn’t be surprised to see a rather familiar object, ancient, famous, which we are told “was arranged on a stand in the hall (until he lent it to a Museum)”—would you? 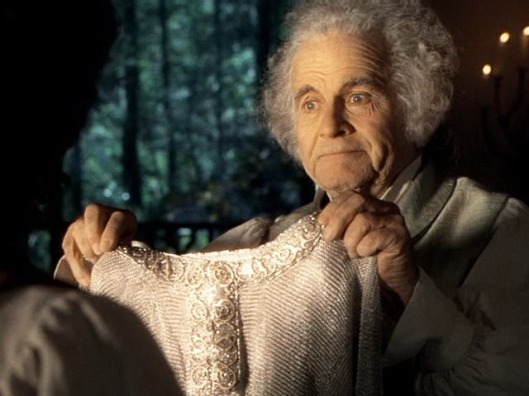 Abbotsford was opened to visitors within a few months of Scott’s death.  Among those tourists were Queen Victoria and Prince Albert. 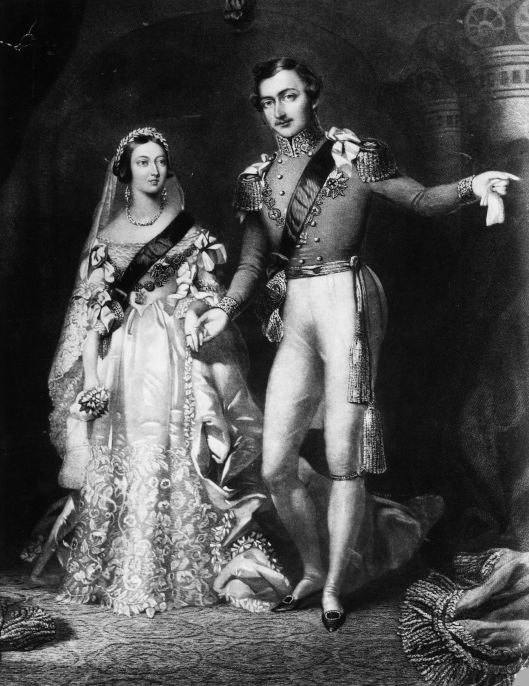 They liked the place so much that, when they decided that they needed a little place in the country, Abbotsford would be one of their models. 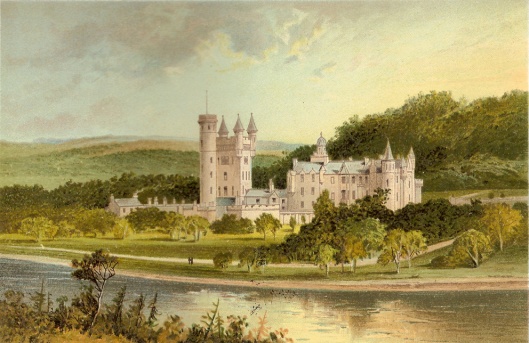 Long after Albert’s death in 1861, the Queen continued to pay a yearly visit to Balmoral. 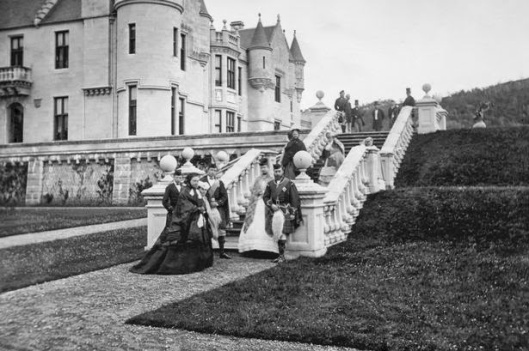 If you’d be interested in seeing Abbotsford as an early 20th-century tourist might have seen it, here’s a LINK to Beautiful Britain:  Abbotsford (1912).