Welcome, as always. In this posting, we thought we’d do a kind of follow-up to our “What Happened to the Rammas Echor” piece by looking at the Mordorian assault on West Osgiliath, which leads up to it. (Yes, we know—bassackwards, right? We can only claim as Indiana Jones does, that “I’m making this up as I go along.”)

We can begin with a map and a description by a participant.

Here’s the Anduin, the major obstacle for Sauron’s forces to cross at a point in easy striking distance of Minas Tirith.

“…And the Enemy must pay dearly for the crossing of the River. That he cannot do, in force to assail the City, either north of Cair Andros because of the marshes, or southwards towards Lebennin because of the breadth of the River, that needs many boats. It is at Osgiliath that he will put his weight, as before when Boromir denied him the passage.” LotR 816

Although there have been very creative attempts to map or depict Cair Andros, for all of its importance in the defense of Gondor, we aren’t given much detail. Its name means “Ship of Long Foam” , called so because of its shape and its action in breaking up the flow of the Anduin. This brought to our minds the Isola Tiberina on the Tiber in Rome,

which so reminded the Romans of a ship that—well, this 1770s engraving makes their next step obvious—

Cair Andros was fortified and had a garrison, although Denethor refuses to reinforce it, saying “Cair Andros is manned, and no more can be sent so far.” LOtR 816

We also know that the enemy will capture it during their two-proned general assault (Gandalf says to Denethor: “Fugitives from Cair Andros have reached us. The isle has fallen.” LotR 819)

To the south, somewhere between forty and fifty miles, lies Osgiliath.

Identified by Denethor as the other major crossing point, it was once a prosperous city, but now lies in ruins, with its bridges destroyed (Celeborn to Aragorn: “And are not the bridges of Osgiliath broken down and all the landings held now by the Enemy?” LotR 367).

The problem, then, for the Enemy is how to cross a river against opposition, a classic problem for generals since there were generals.

We think, for example, of Alexander at the Hydaspes River in 326BC, defended by King “Poros” (actually Porushattama—Greeks were determined to tame everything—including other cultures’ proper names). 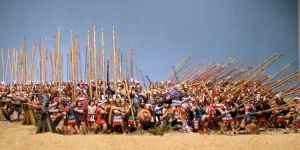 As you can see from the map, Alexander crossed upstream, having distracted the king with a demonstration (military for “feint/decoy”).

This was through open country, however. In the case of Osgiliath

the Enemy would have to cross the river in the face of opposition within a town. Here, we thought of several possibilities: Wellington’s crossing of the river Douro against French resistance in 1809, for example. Here was not only the river, but its steep banks, as well. 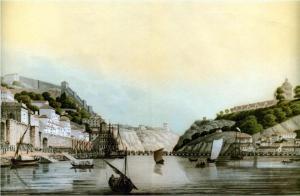 (The pontoon bridge was set up after the attack.)

There were no bridges and the French had collected all of the available boats and had either destroyed them or were holding them on the north side of the river. As Porto (the name means what you think it does) was the center of the fortified wine trade (yes , “Pass the port, Wriothsley, will you?”), the major vessel on the river was this— 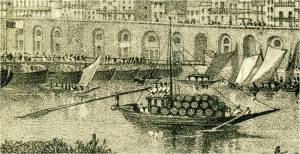 Wellington was always a clever and flexible commander and had to be when confronted by the able Marshal Soult across the river. Much of Wellington’s success came from his use of local sources: Portuguese who hated their French occupiers and supplied some of Wellington’s men with a rowboat and crew. On the north side were four wine boats, soon filled with British soldiers—

and the surprised, but always brave and sturdy, French soldiers were eventually pushed back north, out of the town.

As you can see, this was really a frontal assault, but, because of their former preparations and their sense of the geography, the French had been lulled into thinking that they were prepared.

A second battle with a river crossing against a defended town which occurred to us was from the US Civil War, Fredericksburg, fought in mid-December, 1862. 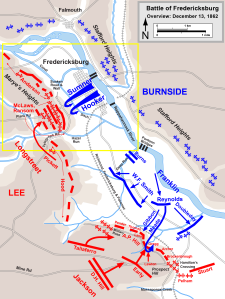 Here, as this extremely useful panorama shows, this was actually a two-step battle: first the Union troops had to cross the Rappahannock River, then they had to drive the Confederate Army from their positions on high ground beyond.

The town of Fredericksburg itself was lightly held: mostly close to the river and relatively few in numbers.

The main Confederate positions were spread a bit thinly for their numbers (not much in the way of reserves, had there been a breakthrough—Lee had had a similar problem at Antietam), but paid close attention to the ground, including taking advantage of a sunken road with a stone wall at its edge as a makeshift trench.

To cross the river itself meant a two-stage process: first, to gain the opposite bank and set up a perimeter; second, to build several pontoon bridges to allow for the rapid deployment of troops and artillery.

They were dragged along on wagons wherever and whenever armies went—

and, with the addition of planks and anchors and ropes, created complete roadways across bodies of water.

The first stage was difficult,

but using pontoons for assault boats

the Union troops managed to secure a foothold on the opposite bank. When bridges went up, stage one had been successful. But, when the Confederates had withdrawn from the town (which they had never intended to occupy in force), there was still that second stage.

Great courage, but thrown away against resolute Confederate defenders,

as you can see in this splendid painting by Carl Roechling, one of our favorite 19th-c. German military-historical painters of the attack of the 114th Pennsylvania (uniformed like French Zouaves, those most admired of French soldiers during this period).

You can see the kinds of difficulties, then, for the Enemy in their attack on the west bank of the Anduin. How do they succeed? A messenger from Faramir, commanding the defense of West Osgiliath, describes the assault:

“The plan has been well laid. It is now seen that in secret they have long been building floats and barges in great number in East Osgiliath. They swarmed across like beetles.” LotR 817.

Here is the initial attack in Jackson’s film version—

When these craft land, they open at the bow and, of course, we immediately thought of D-Day and Pacific island battles and the Inchon landing, and Higgins Boats (LCVPs) 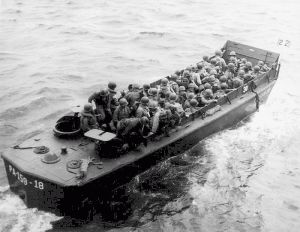 Along with their advanced use of explosives in the attack on the Pelennor to come, these are very sophisticated creatures, especially when one thinks about the landing craft of earlier centuries—the boats designed for the British attack on Quebec in 1759 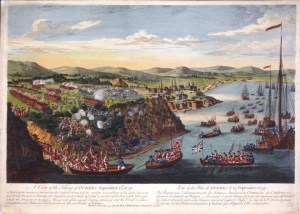 Or the sort of thing you see during the Napoleonic era— 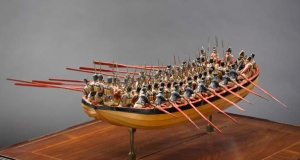 These are for amphibious landings. Mostly, when it comes to the era of pontoons, it appears that, when it came to rivers, soldiers simply used them 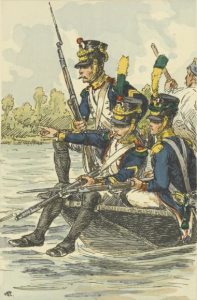 The “beetles” mentioned by Faramir’s messenger swarm over the men of Gondor, so heavily outnumbered that, as Faramir says, “Today we may make the Enemy pay ten times our loss at the passage and yet rue the exchange. For he can afford to lose a host better than we to lose a company.” LotR 816. And then there is their other weapon, the Chief Nazgul.

“But it is the Black Captain that defeats us. Few will stand and abide even the rumor of his coming. His own folk quail at him, and they would slay themselves at his bidding.” As Faramir’s messenger adds. LotR 817.

Gandalf goes out to face him 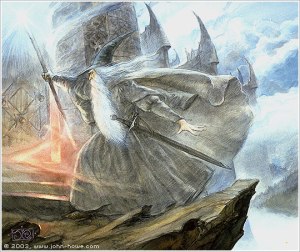 and we wonder if other commanders—Alexander, Wellington, the Union general Burnside, for example–when faced with the problem of a defended crossing, would wish to have him on their side—or the Black Captain?