Welcome back! This posting is devoted to a look at what lies behind that famous imaginary document The Red Book of Westmarch.

As Tolkien says of The Lord of the Rings in the section of the prologue entitled “Note on the Shire Records”:

“This account of the end of the Third Age is drawn mainly from the Red Book of Westmarch. That most important source for the history of the War of the Ring was so called because it was long preserved at Undertowers, the home of the Fairbairns, Wardens of the Westmarch. It was in origin Bilbo’s private diary, which he took with him to Rivendell. Frodo brought it back to the Shire, together with many loose leaves of notes, and during S.R. 1420-1 he nearly filled its pages with his account of the War. But annexed to it and preserved with it, probably in a single red case, were the three large volumes, bound in red leather, that Bilbo gave to him as a parting gift. To these four volumes there was added in Westmarch a fifth containing commentaries, genealogies, and various other matter concerning the hobbit members of the Fellowship.” 14 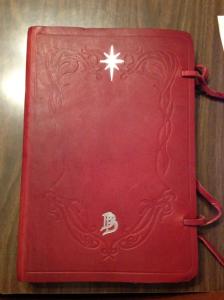 This is not the end of the material on the Red Book, of course,—that takes up another paragraph and then is continued in several more paragraphs about copies and about other pertinent written sources. This is JRRT having fun, of course: after all, for him, what is more satisfying after creating languages than building contexts for them?

This particular context is based upon material from his own specialty, medieval literature, and it’s always been said that The Red Book of Westmarch was inspired by the late 14th-century Welsh Red Book of Hergest. This famous manuscript contains one of the major texts of the cycle of legendary material called the Mabinogion, but for Tolkien its importance may have been simply that 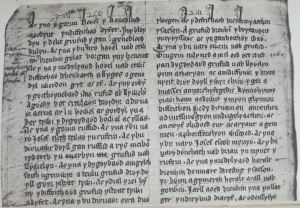 This manuscript and others like it, both Welsh (Black Book of Carmarthen,White Book of Rhydderch, Book of Taliesin) and Irish (Book of the Dun Cow, Yellow Book of Lecan, Book of Leinster, Book of Ballymote, Book of Lismore) 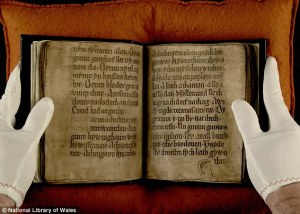 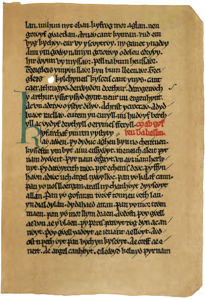 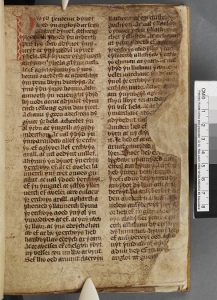 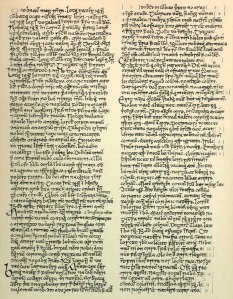 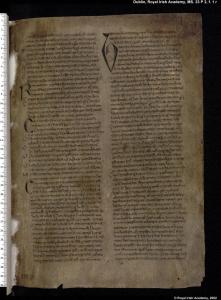 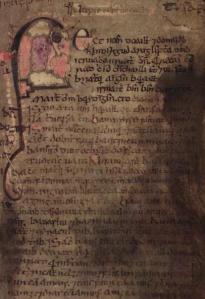 were created in the scriptoriums (Latin plural: scriptoria), the medieval equivalent of a copy center, in various monasteries. The following images will give you an idea of how they worked. 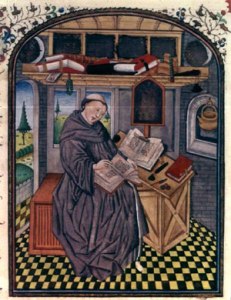 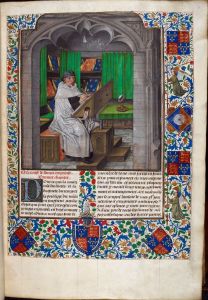 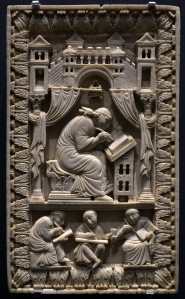 In the world before Gutenberg 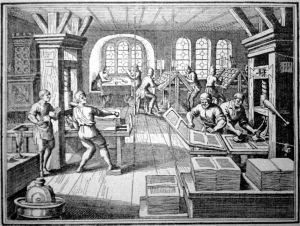 everything was written—and then copied—by hand, a fact which Tolkien faithfully reproduces in his world when he writes that:

“The most important copy, however, has a different history. It was kept at Great Smials, but it was written in Gondor, probably at the request of the great-grandson of Peregrin, and completed in S.R. 1592 (F.A. 172). Its southern scribe appended this note: Findegil, King’s Writer, finished this work in IV 172.” 14

There are, of course, no monasteries in Middle Earth, but, in our world, there were clerks, educated in monasteries, who worked as secretaries and copyists for kings and their nobility, so it’s quite logical that a copy of the Red Book in Middle Earth was the work of a so-called “King’s Writer”.

Comparing an actual manuscript with the Red Book of Westmarch, we find several other differences. For one, the RBW’s four main volumes appear to contain nothing but material relating to the events surrounding Bilbo, Frodo, and the Ring. In contrast, the actual medieval manuscripts are more like compilations. The Red Book of Hergest, for example, has not only the Mabinogion, but also unrelated poetry, and a Welsh translation of Geoffrey of Monmouth’s History of the Kings of Britain, among other works. The Irish Book of the Dun Cow has religious texts and secular, all mixed together, and this appears to be common. The closest the RBW comes to this is volume 5, with its “commentaries, genealogies, and various other matter concerning the hobbit members of the Fellowship” and this is still material pertaining to the main subject, not something as removed as the method for determining the correct date for Easter to be found in the Book of Leinster.

Another difference brings us to a puzzle and the conclusion of this posting.  Tolkien has told us that the core of the RBW is Bilbo’s diary. The Welsh and Irish manuscripts discussed above are collections of literary and religious texts, with nothing personal in them at all, as he would have been well aware.  As well, we might wonder when and where and how Bilbo kept that diary. There’s no mention of it in The Hobbit—after all, Bilbo ran out of his house to join the dwarves without even a pocket handkerchief. And, even if the dwarves had provided one (along with the handkerchief–although that does not seem terrifically likely–the dwarves who visit Bilbo seem more attuned to orality than literacy), surely it would have been lost with all of the other baggage when the company fell into the goblin world and Bilbo met Gollum. 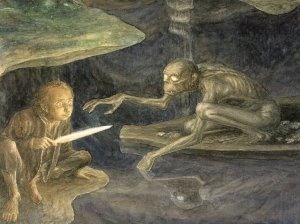 Other than assuming that Bilbo, although he had forgotten his handkerchief, had remembered his Blackberry and was constantly dictating to the Cloud for later transcription, what do we have here?  (And, while we’re wondering, if The Hobbit was based upon that mysterious diary, what do we know of the adapter/narrator who turned it from a diary into a continuous narrative–another “King’s Writer”?)