Two posts ago, we talked about how it might be possible to make Sauron –the- nearly-invisible slightly more visible by means of his minions. 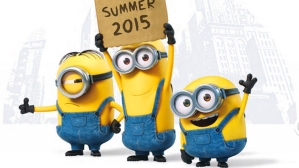 These included the Nazgul

And, the real stars (as Nick and Fetcher, the two rats from Chicken Run, refer to themselves)

Tolkien appears always to have had trouble placing them. We would suppose that this problem arose because Orcs were not the usual run-of-the-mill lackeys one usually sees in adventure, like the sheriff of Nottingham’s men

the soldiers of the evil commandante in the Zorro adventures 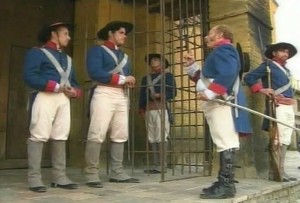 or the hordes of faceless stormtroopers in Star Wars 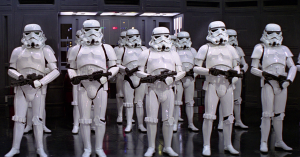 His first question—where do they come from? was immediately followed by a second—if they are created, do they have free will? That first question, any author might ask himself. The second, however, was pure Tolkien, fitting into the pattern which those who’ve only read The Lord of the Rings and not JRRT’s letters on the subject or the volumes produced by the admirable (a pale adjective!) Christopher Tolkien, would never see: the complex spiritual history which lies behind the creation of Middle Earth.

Not that the first question was simple. In The Lord of the Rings, Fangorn says of the Orcs:

“But Trolls are only counterfeits, made by the Enemy in the Great Darkness, in mockery of Ents, as Orcs were of Elves.” L486

The author, however, had a very different opinion:

“Their nature and origin require more thought. They are not easy to work into the theory and system.”

Not easy because of that second question. As he wrote in an unpublished essay entitled (not surprisingly) Orcs (Morgoth’s Ring 409-413),

“…only Eru [the central creative deity] could make creatures with independent wills, and with reasoning powers. But the Orcs seem to have both: they can try to cheat Morgoth/ Sauron, rebel against him, or criticize him.”

Morgoth (Sauron’s former master) made the Orcs in some way, but, because only the central deity, Eru, can give independent wills and reasoning powers—which Orcs display by cheating, rebelling, and criticizing– to created beings, what is to be made of Orcs? Bound by those seemingly contrary facts, the conclusion was obvious to him that “therefore they must be corruptions of something pre-existing.” (409)

“But Men had not yet appeared, when the Orcs already existed. Aule constructed the Dwarves out of his memory of the Music; but Eru would not sanction the work of Melkor [i.e. Morgoth] so as to allow the independence of the Orcs.

It also seems clear…that though Melkor could utterly corrupt and ruin individuals, it is not possible to contemplate his absolute perversion of a whole people, or group of peoples, and his making that state heritable.

Thus, logically, if the Orcs are created, not corrupted, and created by a power which hasn’t the ability to give his creations independence, then–

“The Orcs were beasts of humanized shape (to mock Men and Elves) deliberately perverted/converted into a more close resemblance to Men. Their ‘talking’ was really reeling off ‘records’ set in them by Melkor. Even their rebellious critical words—he knew about them. Melkor taught them speech and as they bred they inherited this; and they had just as much independence as have, say, dogs or horses of their human masters. This talking was largely echoic (cf. parrots). ..Also (n.b.) Morgoth not Sauron is the source of Orc-wills. Sauron is just another (if greater) agent. Orcs can rebel against him without losing their own irremediable allegiance to evil (Morgoth).” (410-411)

We don’t know about you, dear Readers, but we confess to a certain disappointment at the idea that the Orcs are only more complex puppets. Consider this piece of villainous dialogue between Gorbag and Shagrat: 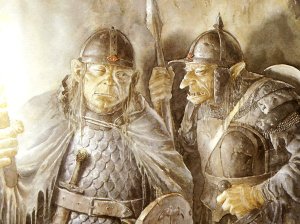 “I’d like to try somewhere where there’s none of ‘em. But the war’s on now, and when that’s over things may be easier.”

“They would,” grunted Gorbag. “We’ll see. But anyway, if it does go well, there should be a lot more room. What d’you say?—if we get a chance, you and me’ll slip off and set up somewhere on our own with a few trusty lads, where there’s good loot nice and handy, and no big bosses.”

The plans and reminiscences of demons—how wonderful! And what an interesting sidelight into their world and even their past: they used to be masterless marauders, in the “old times”—could this suggest that perhaps they weren’t such puppets after all? We would like to imagine so!

And what is your opinion, dear readers?