In our last, we discussed Gandalf’s confrontations with evil, including his meeting with the head of the Nazgul, the Witch King of Angmar, at the main gate of Minas Tirith.  As we think about it, we believe that there’s a bit more to say—but with JRRT, isn’t there always?

In the background of this Ted Nasmith picture, you can see what has broken open the gate:  the giant battering ram, Grond.  Here is an image of it from the Jackson films—

and here is Tolkien’s description—which is, although grim, in a much lower key, we would say:

“Great engines crawled across the field; and in the midst was a huge ram, great as a forest-tree a hundred feet in length, swinging on mighty chains.  Long had it been forging in the dark smithies of Mordor, and its hideous head, founded of black steel, was shaped in the likeness of a ravening wolf, on it spells of ruin lay.  Grond they named it, in memory of the Hammer of the Underworld of old.  Great beasts drew it, orcs surrounded it, and behind walked mountain-trolls to wield it.”  (The Return of the King, Book Five, Chapter 4, “The Siege of Gondor”)

At its simplest, a battering ram is just a heavy log used by a gang of men, soldiers or otherwise, to bash a wall

or bash in a gate.

(You’ll notice that the first of these two images has an actual ram’s head on it.  This would give the point of the battering ram a harder surface and probably is a reference to the way two rams will actually fight, butting heads against each other.)

Grond is a more complex ram, however, being suspended on chains so that the weight of the swing of it will increase its force.  Here is a model of the ram from the film, to make it a bit clearer. 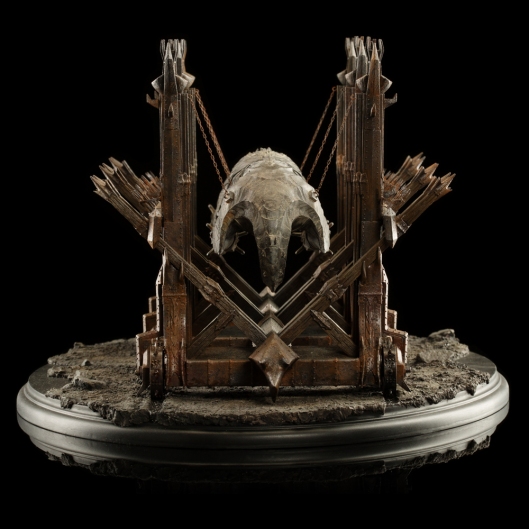 And here is an illustration of a medieval ram so that you can see how it works. 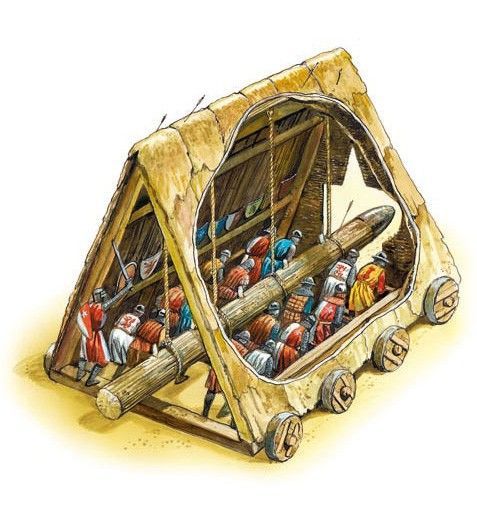 Rams as an engine of war have been around a long time.  The Egyptians used a very simple version,

while the Assyrians employed a more complex model. 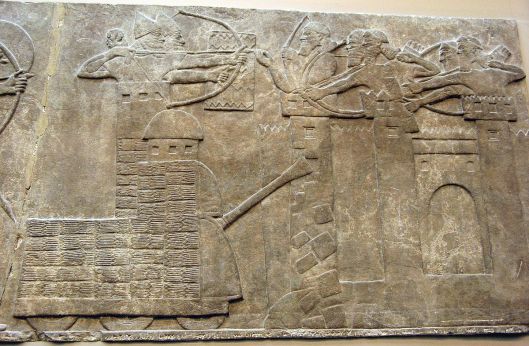 Both of these, you’ll notice—and you can see it especially in the Assyrian example—aren’t actually attempting to slam into the wall.  Rather, they are working to drive a wedge among the wall’s blocks—probably in both cases of mud brick—so that the upper face of the wall will collapse in their direction and, with any luck, pile up enough fallen material that the besiegers might even be able to scramble up it and into the city.

You’ll notice, too, that the Assyrian ram is covered in something—possibly animal hides?  These would not only protect those inside from missiles shot or thrown from the wall above, but would also (those who constructed it must have hoped) make it somewhat nonflammable.  In fact, here’s another illustration where the besieged are trying to throw torches at it and the besiegers are attempting to keep the covering wet in return.  (JRRT is aware of this—as he says of Grond:  “Upon its housing no fire would catch…”)

The Assyrians also appear to have used an actual battering ram—this image showing one aimed at a gate,

as is Grond.  And this is the Witch King’s target:

“It was against the Gate that he would throw his heaviest weight.  Very strong it might be, wrought of steel and iron, and guarded with towers and bastions of indomitable stone, yet it was the key, the weakest point in all that high and impenetrable wall.”

Tolkien appears to have left us only a few images of Minas Tirith, and the two we’ve seen are very rudimentary (this is the only one we could post), and

probably made to help him to visualize the position of the seven gates.  As far as we know, he has not left us any image of the Gate itself, except the description above.  In the Jackson films, the gate has been elaborated—

The outermost frame is in the style known as Romanesque.  Here is a good example from the church of Santa Maria Seu d’Urgell, in Catalonia.

Just under the arch of the Gate at Minas Tirith is the suggestion of another part of a gate structure, a portcullis.  Ordinarily, this would be a full-size inner gate behind the main gate and would act as a secondary defense.

It would be worked by a system of pulleys and weights, as in this diagram. 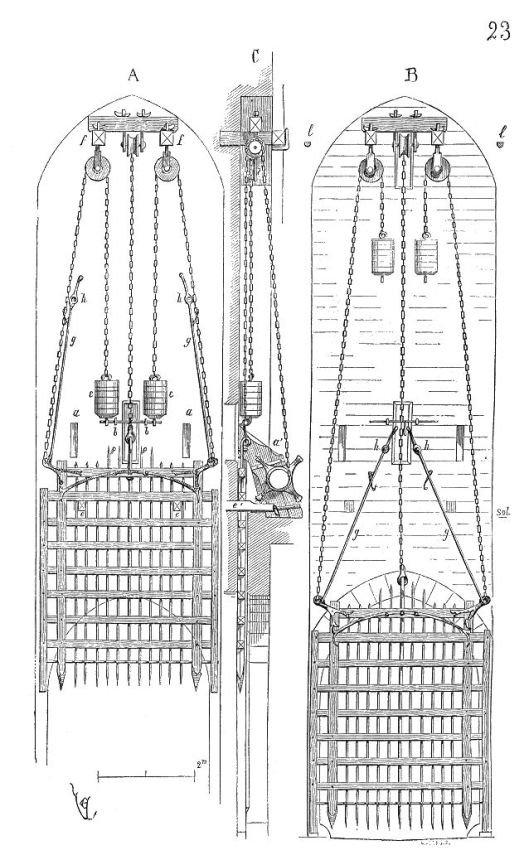 As this isn’t mentioned in Tolkien’s description, however, we presume that the Gate of Minas Tirith isn’t backed up by one—and it doesn’t appear in the Jackson films, only this hint of one.

Tolkien says that the Gate itself is made of “steel and iron” and seems to lack any features.  As you can see, the gate of Jackson’s Minas Tirith has figures upon it, like certain elaborate medieval cathedral doors.

Such figures are usually part of the outer structure of the door, being cast bronze, like the famous door leaves from the church of St Michael in Hildesheim, in Germany. 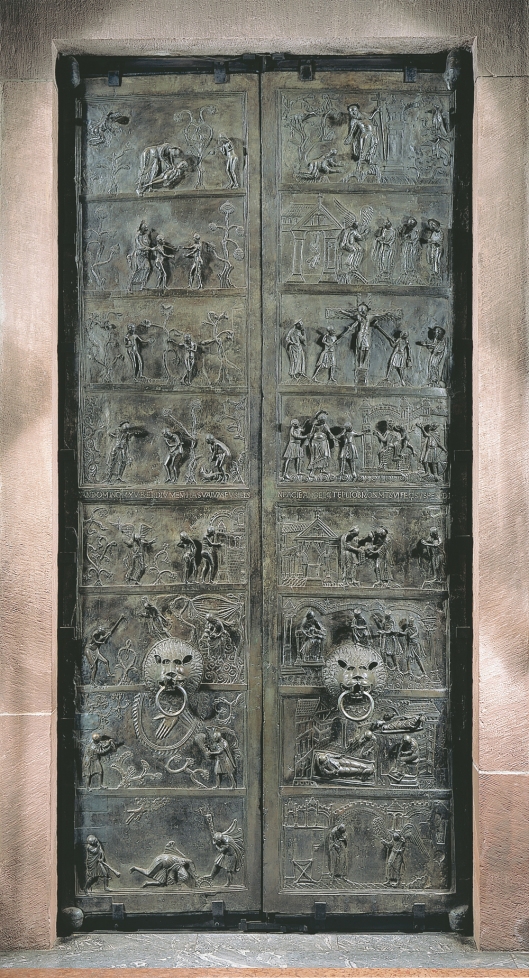 We don’t know who the figures are meant to be on Jackson’s gate, although it’s clear that some are warriors, being in armor, and there is one woman, at least, in the top row.  Founders of Gondor?

Whoever they were meant to be, even if they had been on Tolkien’s Gate, they would have been no defense against what happened next:

“The drums rolled and rattled.  With a vast rush Grond was hurled forward by huge hands.  It reached the Gate.  It swung.  A deep boom rumbled through the City like thunder running in the clouds.  But the doors of iron and posts of steel withstood the stroke.

Then the Black Captain rose in his stirrups and cried aloud in a dreadful voice, speaking in some forgotten tongue words of power and terror to rend both heart and stone.”

We have seen earlier—and written earlier—about the use of some sort of explosive device both at Helm’s Deep and at the Rammas Echor, the outward defensive wall of the Pelennor, the far boundary of the fields outside Minas Tirith.  Here, however, something else is at work, magic of some sort.  Grond has had “spells of ruin” laid upon it and now:

“Thrice he cried.  Thrice the great ram boomed.  And suddenly upon the last stroke the Gate of Gondor broke.  As if stricken by some blasting spell it burst asunder:  there was a flash of searing lightning, and the doors tumbled in riven fragments to the ground.”

All of which brings us back to our last posting—

What an ending—or, really, a beginning.  As we can’t better it, we’ll simply say thanks, as always, for reading and