Wait—isn’t that “Halloween”—or, as it used to be spelled “Hallow E’en”, rather old-fashioned English for “Holy Evening”?

And a second wait–isn’t this a little late–or a little early?  When we realized that this 2019 Halloween edition was never posted, we wondered where we should put it.  With a slip of the keyboard, we had posted the last part of our review of Star Wars IX for last Friday, rather than this Wednesday, so we took that as a nudge from the Force and are (temporarily) declaring an early Halloween, 2020 and posting this.  We hope you enjoyed last Halloween and this will add to your happy memories!

And yes, dear readers, “Holloween” is not the correct spelling, but it’s a common US (mis)pronunciation.  And an inspiring one, too, as we thought about it.

It’s a “Holy Evening” because it’s the night before November 1st, All Saints Day in the western Christian calendar.

But, for us, it’s also hollow—because, in the calendar of an older religion, 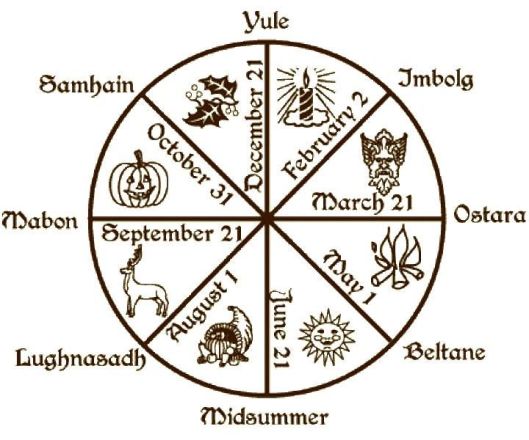 If you lived in a Neolithic 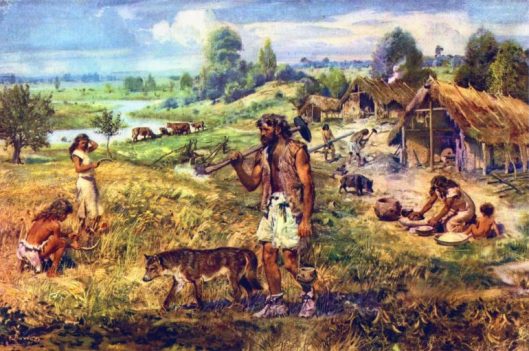 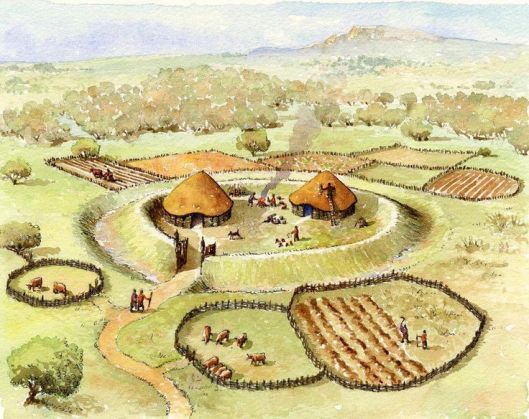 in the Celtic world, now–late October–meant crops were already gathered and now it was time to bring in the herds, especially of pigs (who were allowed to roam forests full of nut trees in the late summer), 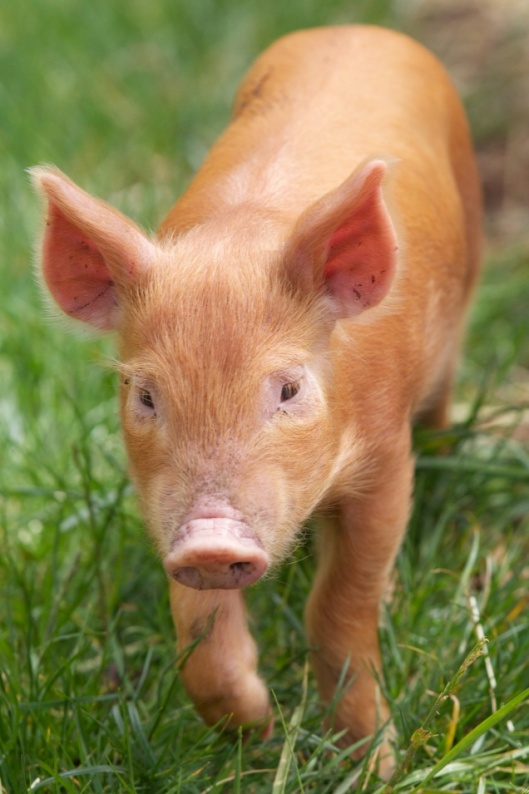 choose a few to continue the herd, and slaughter the rest, smoking or salting the meat for the winter. 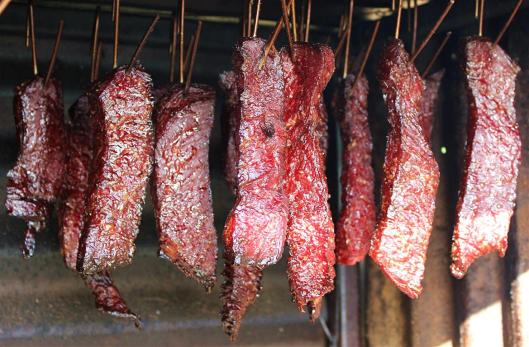 Because the summer was dying along with the herds, somehow the belief arose that this was a time when the wall between the living and the dead, and between this world and the Otherworld, was so thin that it could no longer act as a barrier.  The spirits of the dead might come to visit the living— 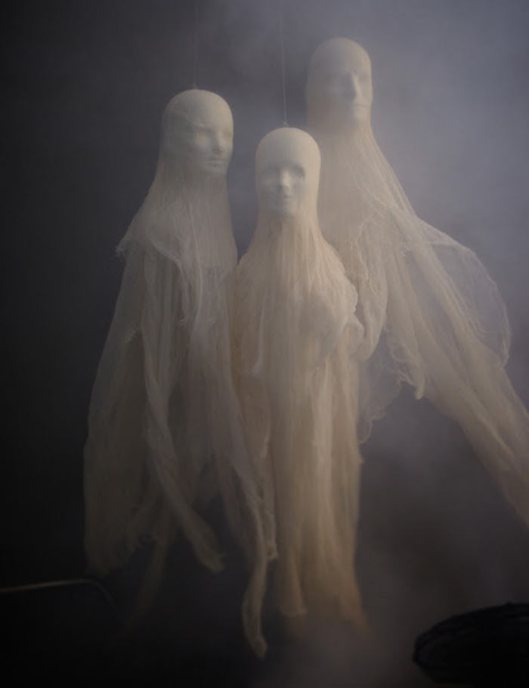 and the Aes Sidhe (AH-es SHEE-thyeh), the people of the Otherworld, 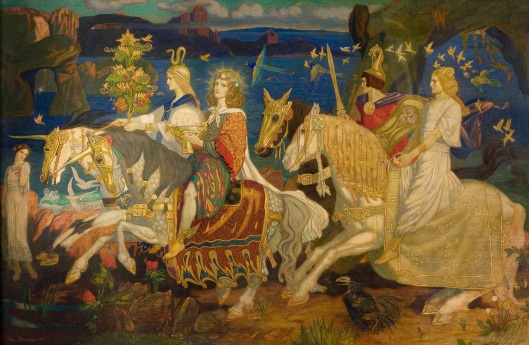 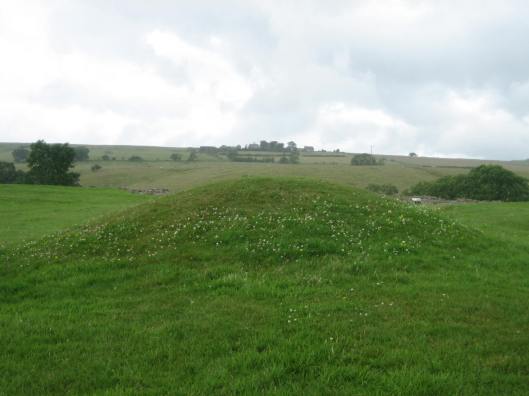 in later belief, or simply step through the open doorways of the time of the feast of SAMHAIN (SA-vuhn, in older pronunciation) in the older stories.

These are the people who, already miniaturized in Shakespeare’s time, became a staple of children’s book illustrations and sentimental paintings in the Victorian era. 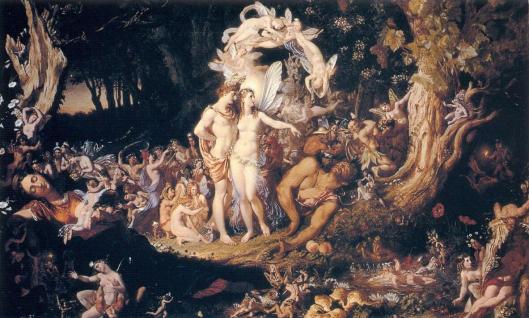 In older times, however, they were seen as looking just like the humans they could move among,  powerful, even menacing, stealing children, enticing away girls and young men who, if they ever returned, would come back hundreds of years later, but think that they’d only been gone a night, as in the story of Oisin (OH-sheen) in the Land of Youth (the basis of WB Yeats’ early “The Wanderings of Oisin”, 1889). 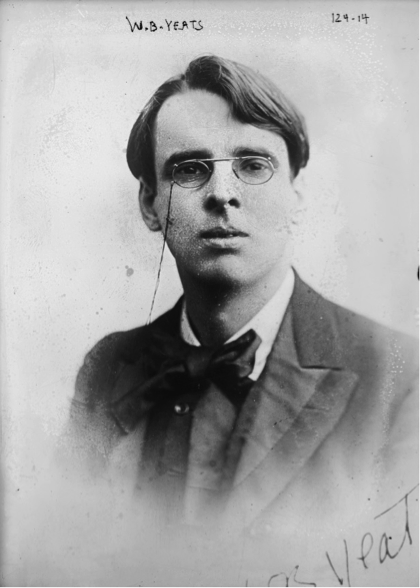 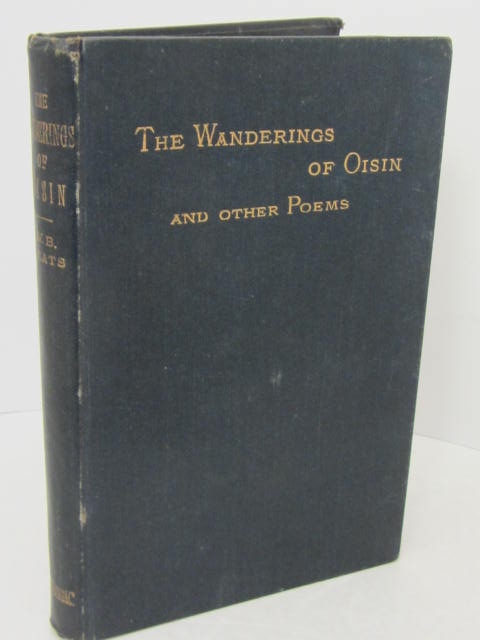 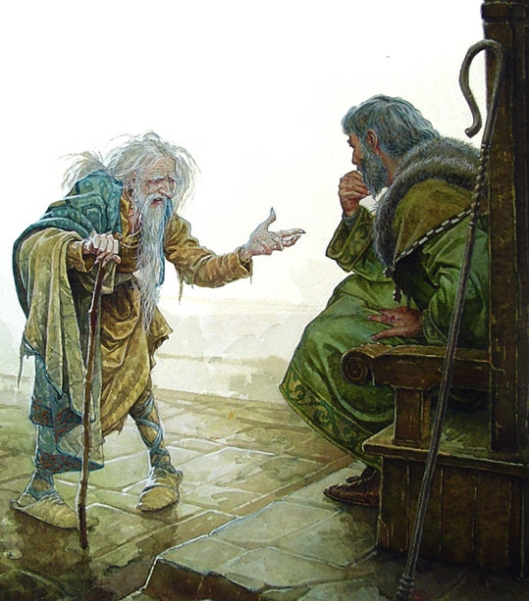 Here, we see Oisin in one version of the story, having returned and turned into the ancient man he really is, talking with St Patrick.

The Scots ballad of “Tam Lin” shows us a young man rescued by a young woman from his ultimate fate:  abducted earlier, he is to be the victim in a sacrifice to Satan. 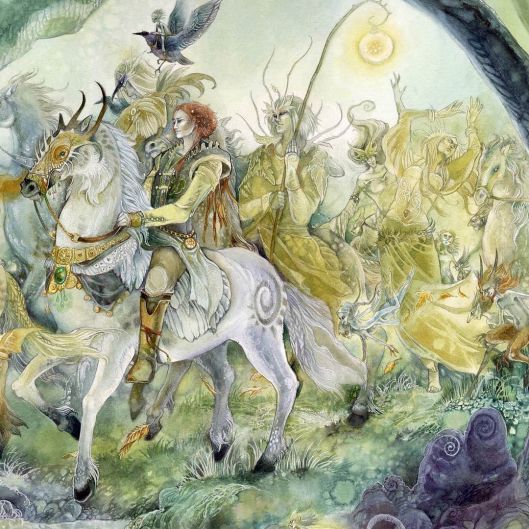 It being a time between worlds, it seems like a good moment for those who can see between times—which brings us to witches, who are very much part of Halloween. 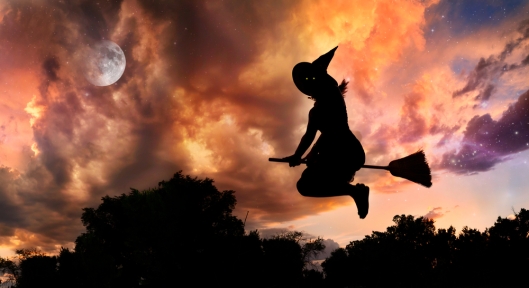 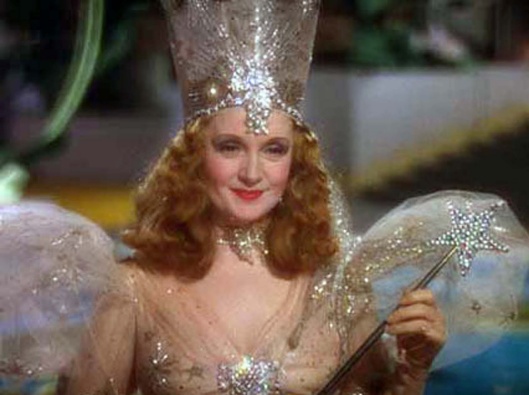 Well, not this one. 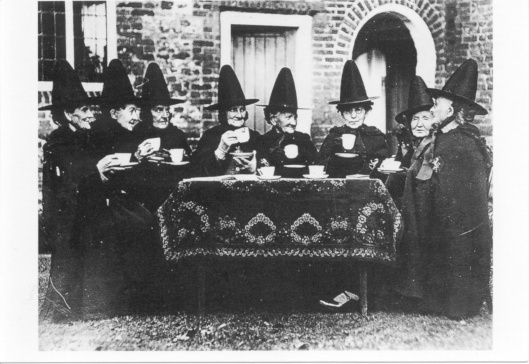 Or these—somehow we can’t imagine witches having afternoon tea—unless there is eye of newt for dessert.

We mean those three witches who surprise Macbeth with a greeting, that, although he doesn’t know it, he is already Thane of Cawdor and, even more astonishing, he will be “king hereafter”. 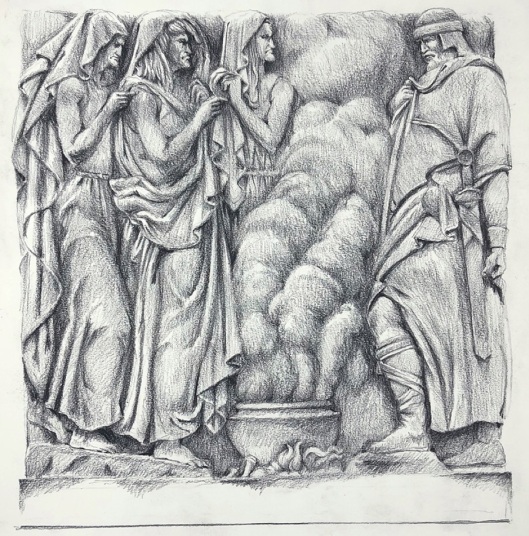 In an earlier posting, we suggested that the witches are three in number because they might represent the Celtic figure of the Badb (BAHTH-V), who appears in three forms, including a crow, 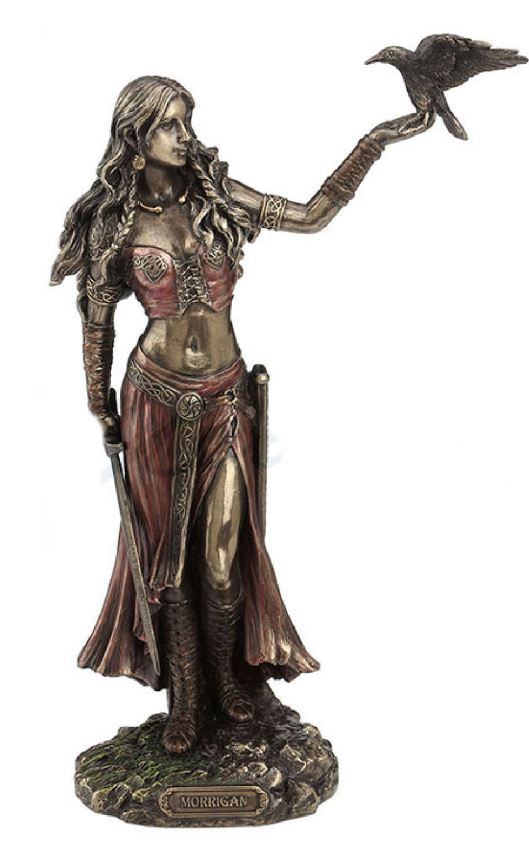 and who was drawn to fighting and to battlefields, the very place where Macbeth and his comrade Banquo, have just been. 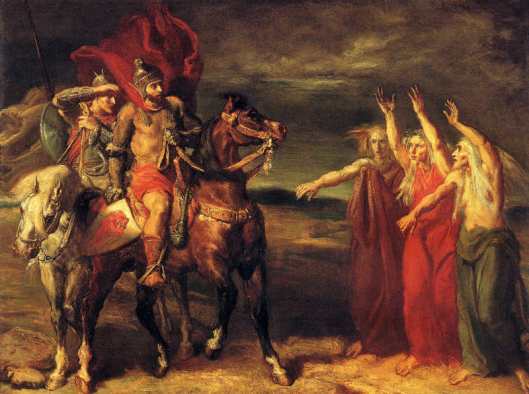 In early stories, she was the mortal enemy of Cuchulain, the great Irish hero, and caused his death by tricking him into undoing the magical spells which protected him.  In this famous sculpture (in the old General Post Office in Dublin), there she is, sitting on the dying Cuchulain’s shoulder. 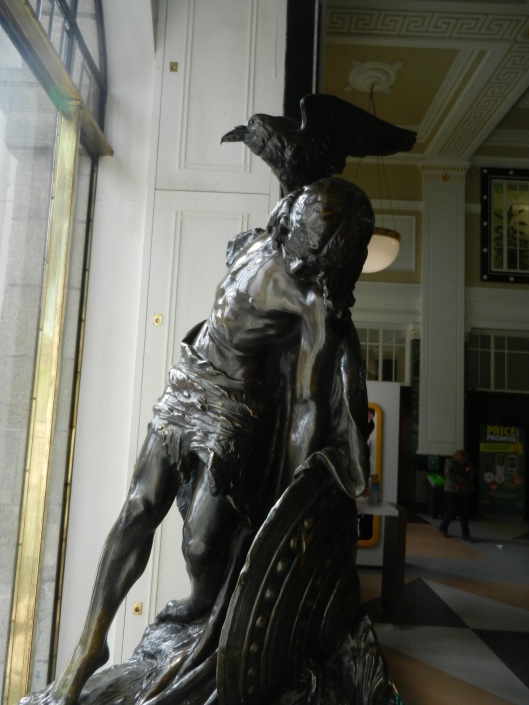 As well as the Badb, we could see them as the ancient Greek Fates, the Moirai, each having a role in an image based upon likening life to the making of cloth:  Clotho, who spins a person’s life thread, Lachesis, who marks out the length, and Atropos, who cuts that thread. 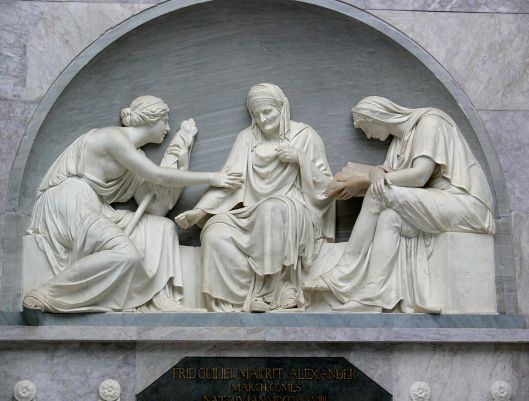 And here we see a set of three magical figures, like Macbeth’s witches, all associated with time (we’ll come back to that), to which we would add another possibility, which takes us to a different form of Greek goddess, the Muses, inspirers of art.  They are three times three in number, and, when they first appear to the ancient Greek poet, Hesiod, to announce to him that he will be a poet, 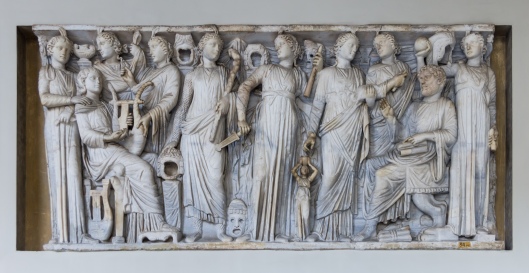 it is said of them that they speak of “the things [now] being, the things about to be, and the things being before” (Hesiod, Theogony, line 38—our translation).  So, they are also associated with time. 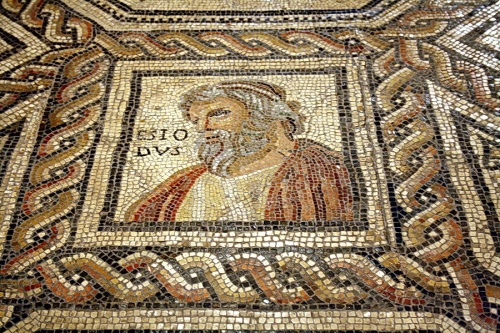 To which we add a third possibility, the Norns, Germanic figures rather like the Moirai. 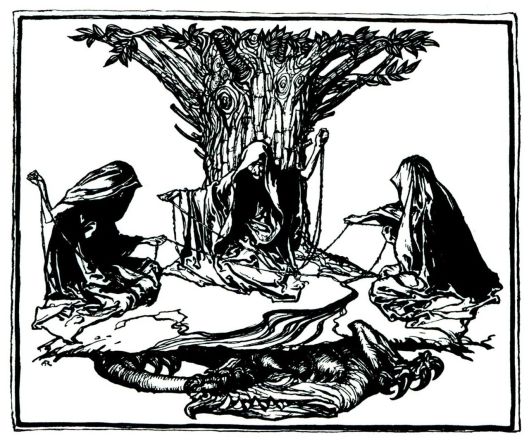 In the Voluspa, the first poem in the Icelandic Poetic Edda (10th century?), there are three of these, with names which appear to indicate, like the Muses, their link to time:  Urd (Old Norse “urdr”, “the past”), Verdandi (Old Norse “verdandi”, “the present”), and Skuld (Old Norse “skuld”, “it will be”).

Imagine, then, that Macbeth’s witches are three in number because, speaking as they do, they, like the Moirai, the Muses, and the Norns, all represent time.  And, like the Muses and Norns, the witches are the stages of time:  one witch is Macbeth’s past (he’s already the Thane of Glamis—said “GLAHMS”), a second is his present (he doesn’t know it yet, but the king, Duncan, has made him Thane of Cawdor to replace the rebel thane, just defeated), and the third is his future, that he will be king of Scotland.  (See Macbeth, Act I, Scene 3)  [Here’s the LINK for the First Folio, the first printing of the play, in 1623.]

Hallow E’en, then, is the perfect moment for witches to appear.  After sunset, we are in the hollow of the old Celtic year:  summer is done, winter will begin tomorrow, but now, being in neither, is a good time to think of what’s happened in the year past, where we are currently, and where we will be in the next year.  If three witches appear to us and hail us as future kings, however, we’ll try to remember another quotation from Shakespeare, from Richard II, Act 3, Scene 2 (again, from the First Folio), in which that word “hollow” is a warning:

For Heauens sake let vs sit vpon the ground,

And tell sad stories of the death of Kings:

How some haue been depos’d, some slaine in warre,

Some haunted by the Ghosts they haue depos’d,

Some poyson’d by their Wiues, some sleeping kill’d,

All murther’d. For within the hollow Crowne

That rounds the mortall Temples of a King,

Keepes Death his Court, and there the Antique sits

Scoffing his State, and grinning at his Pompe,

Allowing him a breath, a little Scene,

To Monarchize, be fear’d, and kill with lookes,

Infusing him with selfe and vaine conceit,

As if this Flesh, which walls about our Life,

Were Brasse impregnable: and humor’d thus,

Comes at the last, and with a little Pinne

Bores through his Castle Walls, and farwell King.

And so perhaps it’s best if we stick to a witch we can melt with a pail of water before we begin to think too hard about her vision of our future. 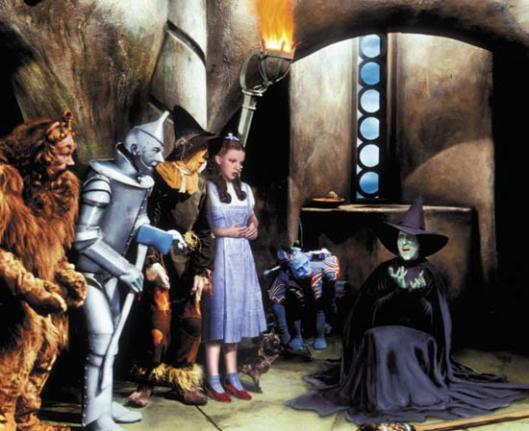 Happy Hollow—Halloween.  The candy corn is on us 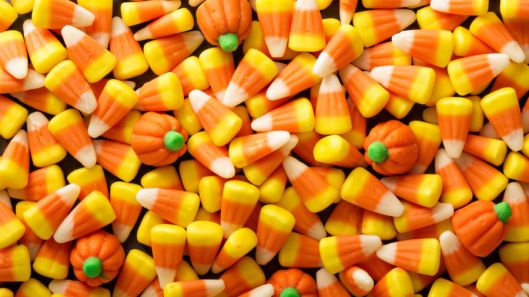 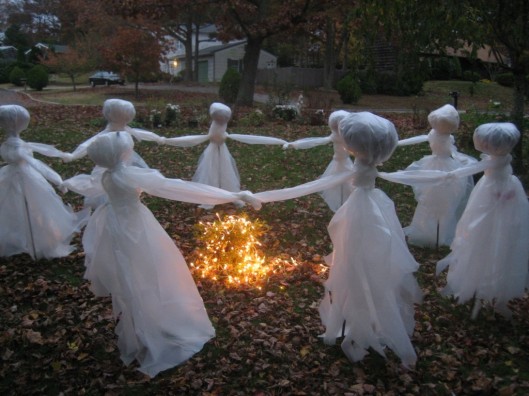