Our title is actually a translation of a French compound, lieutenant, which, by itself, is an adjective, but, if you add a definite (le) or indefinite (un) article, you have a noun—and a military rank, a rank which Tolkien held in 1916.  Anyone who knows anything about JRRT is aware of this and has probably seen this photo of a very serious young officer.  In this posting, we’d like to take a closer look at this photo and what it once represented—and, as you’ll see, there’s a great deal!

In 1914, JRRT had made a difficult decision:  to finish his degree and not to join up along with the passionate thousands who did

and, a young man still in civilian dress, to risk the public humiliation of having a young woman—or group of young women—come up to him in the street and offer him a white feather as a marker of his cowardice in not enlisting immediately.

While finishing, he had been a member of the OTC, the Officer Training Corps at Oxford,

which had helped him to gain a (temporary—for the duration of the war) commission as a second lieutenant in the British Army in July, 1915.

The title of second lieutenant was relatively new in 1915, having only been introduced in 1877, as a permanent replacement for the much older title of “ensign” (“cornet” in the cavalry).  Originally, an ensign’s job had been to carry an ensign—that is, a flag—

which could be a very hazardous job, as a flag (a “colour”, in the infantry, a “standard” in the cavalry), was not only a rallying point, but also the equivalent of a very large sign shouting “Shoot this one first!” 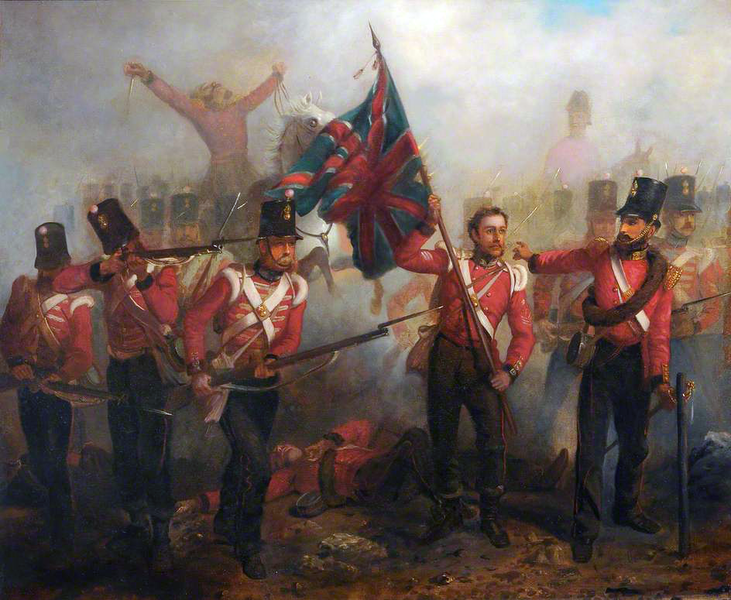 By 1915, British units hadn’t carried their colours into battle for about 35 years (the last known instance being at Laing’s Neck, during the First Boer War, in 1881), 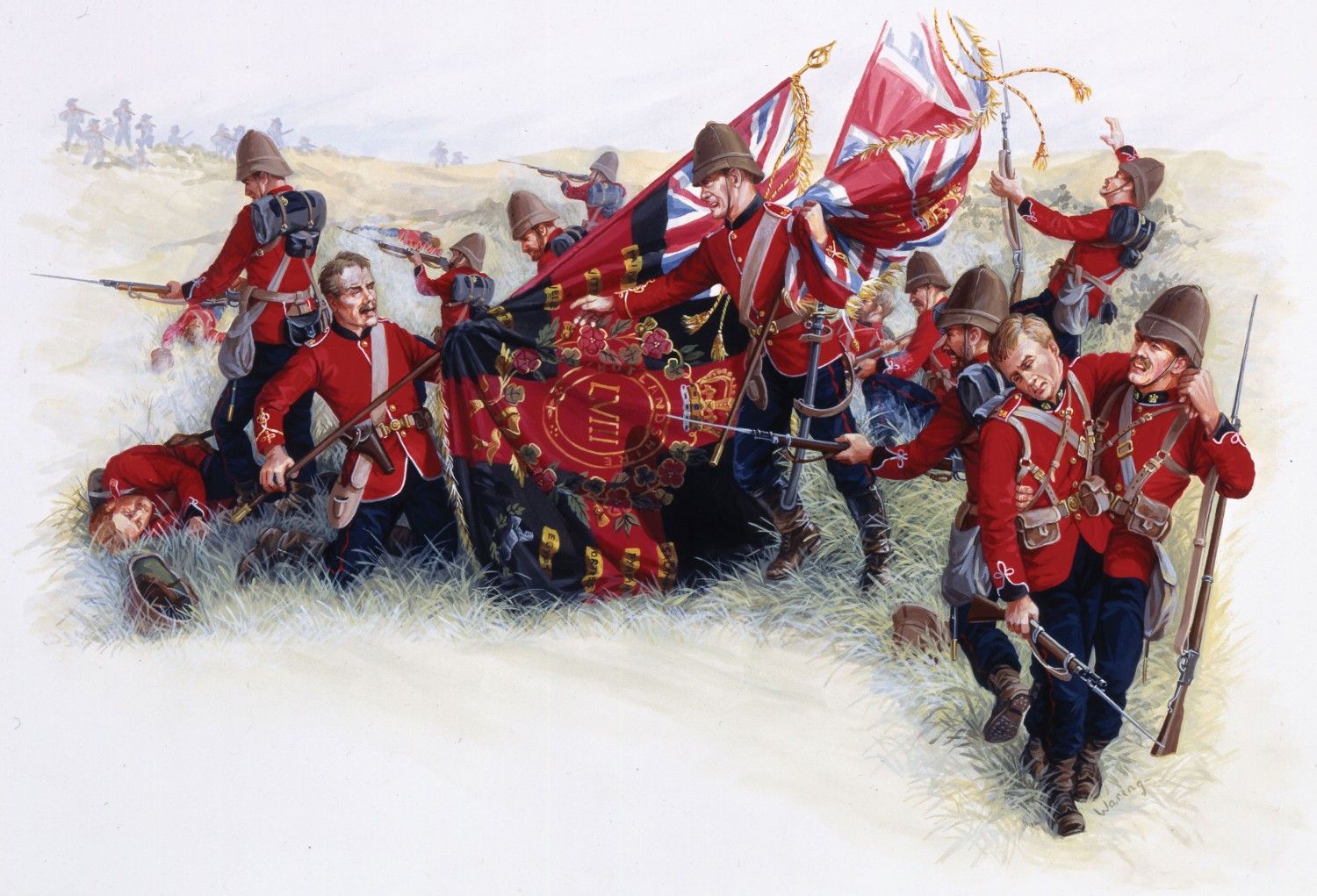 so a second lieutenant would be given other roles in the regiment to which he belonged, such as commanding a platoon, a smaller part of a larger company, or in JRRT’s case, being in charge of communications—a subject which we’ve discussed in a previous posting.

Although enlisted men were issued uniforms, equipment, and weapons,

(This wonderfully-detailed illustration is by Mike Chappell, one of our favorite modern illustrators of the British Army.)

officers, as “gentlemen”, were expected to supply everything themselves.

This included not only uniform,

but revolver (this is JRRT’s actual .455 Webley, now in the Imperial War Museum collections)

along with the belts on which to carry them,

plus all the other necessary items to join an army on campaign.

Taken altogether, it would have been very expensive for a new graduate, like JRRT, and so the government began issuing a stipend to help “temporary officers” (the Army sometimes had uglier terms for them) to kit themselves out like this.

And we’ve forgotten one essential, by 1916, something no soldier in the front lines would ever have been without—and here’s why.

As people always interested in the medieval, we can say that we’ve seen this pattern before—here are examples from the 13th-century Maciejowski Bible,

where such a thing might have been called a “kettle helm”.

With all of the above in mind, let’s return for a moment to a larger version of that very familiar picture of JRRT in uniform.

First off, you can see that, for this rather formal portrait, although he’s in uniform, he is wearing neither revolver nor sword, but he is wearing the distinctive belting (named after the general who invented the pattern a “Sam Browne”).  As well, if you look at his left cuff, you can see the mark of his second-lieutenancy, what soldiers commonly called a “pip”, but which formally was called a “Bath star”.  One of these on each cuff indicated the rank of second lieutenant.  When Tolkien was promoted, in January, 1918, to First Lieutenant, he would have added a second star.  Here’s a table of rank markers to help you.

If the image were as clear as that of this reenactor, we could see that his uniform bore more than his rank—older regiments, in particular, had special, distinctive markings

Note the badges on this reenactor’s cap and on his collar tabs.  These are the markings of the West Yorkshire Regiment.

Tolkien belonged to the Lancashire Fusiliers, whose badge looked like this:

You’ll see that the outer layer is the image of a flaming bomb or grenade.  This was an old symbol for fusiliers in general in the British Army.  In the 17th-century, soldiers with firearms used mainly matchlock weapons.

This was fired by applying a piece of specially-prepared cord to gunpowder.  If you wanted a guard for your artillery or powder supply, burning cord was the last thing you would want so, instead, such guards were armed with much safer flintlock fusils—hence the term fusilier.

The Lancashire Fusiliers claimed such a unit as ancestors and, as one of the units which had served in the British force which had captured Egypt from the French in 1801 (as the 20th Foot—meaning “infantry regiment”),

they had been entitled to add “Egypt” to their regimental colours and to their badges.

JRRT’s collar tabs and buttons would have been slightly different, displaying the sphinx inside a laurel wreath.

Contemplating this carefully-combed and trimmed young man in his formal uniform,

it might be difficult to imagine him as the man who, in time, could create Mordor and all within it—until you contrast it with images like these, the sorts of things which he would have seen daily in summer and early fall, 1916–

May we recommend to you this excellent book, if you would like to know more about Tolkien and his experiences, 1914-1918?