Welcome, dear readers, as ever.
Two postings ago, we were talking about woundings in The Lord of the Rings and thinking about the medical care there as compared with that available in what we always think of as the actual parallel medieval world. We had gotten as far as Boromir, who, we imagined, would have been beyond help, pierced as he was by multiple arrows.

(We had also said that Boromir’s wounding reminded us of the death of the Macbeth figure in Kurosawa’s Throne of Blood, 1957. 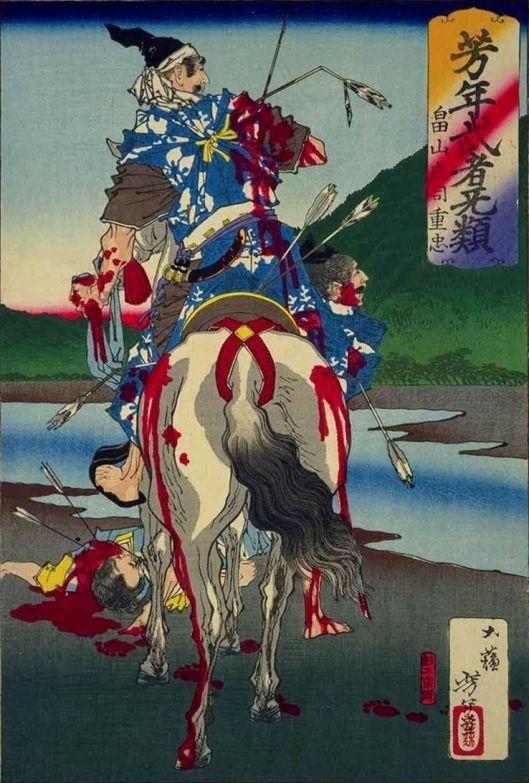 [Here, by the way, are some great links—one to a massive collection of Yoshitoshi prints, the other is an excellent guide to the world of Japanese block prints in general—both highly recommended!]

http://www.ukiyo-e.se/
The next wounding is that of Faramir.
After the fall of the Rammas Echor, the long wall which was meant to protect the far side of the Pelennor, Faramir was leading the rear guard, but:
“…there came flying a deadly dart, and Faramir, as he held at bay a mounted champion of Harad, had fallen to the earth.” (The Return of the King, Book Five, Chapter 4, “The Siege of Gondor”)
At this time, we are not told of how the arrow was removed (we later are told that Prince Imrahil did it on the battlefield), but, that which concerned John Bradmore about the wounded Prince Hal in our 1403, after he had suffered an arrow wound, 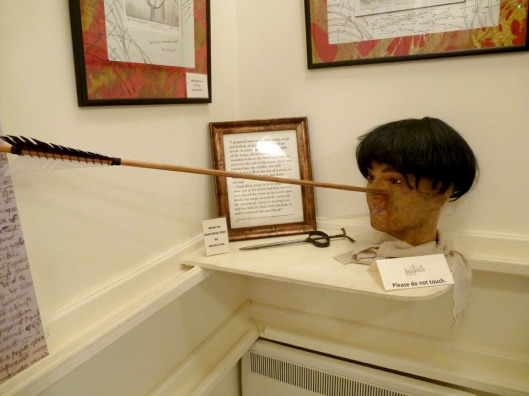 now afflicted Faramir: infection.:
“During all this black day Faramir lay upon his bed in the chamber of the White Tower, wandering in a desperate fever…”
In our medieval world, medicine was based upon a combination of beliefs, some of which even dated back to the Greco-Roman world.
One major foundation block was the idea that the body was governed by four elements, called “humors”: black bile, yellow bile, phlegm, and blood.

They determined personality and behavior, but, although they were natural to the body, they could be thrown out of balance and part of a medieval doctor’s job was to rebalance them. 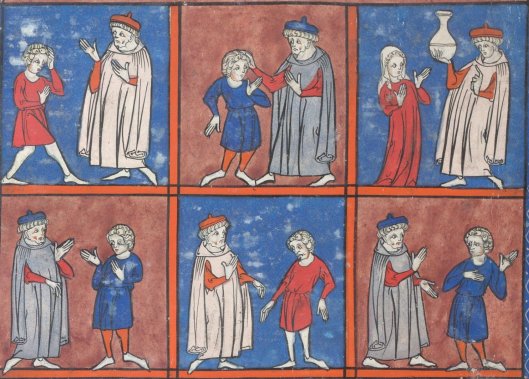 This rebalancing could include doses of all sorts of things—dangerous metals, like mercury, concoctions from various plants, some of which were helpful, some poisonous, and bleeding—based upon the idea that, by removing blood, you were helping rebalance the body’s natural humorous proportions. 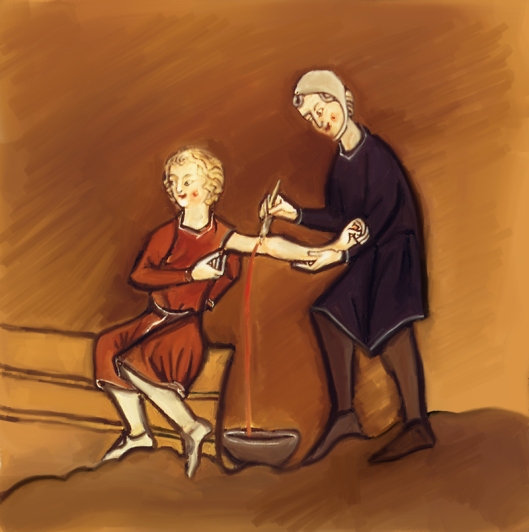 In Faramir’s case, a doctor might try a number of drugs based upon plants which were believed to bring fever down:
angelica 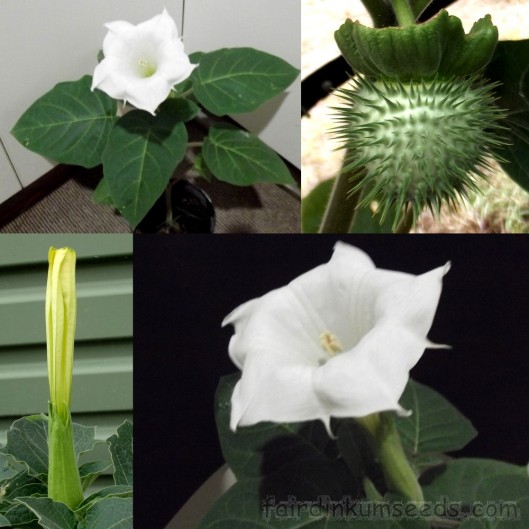 In the text, however, although Pippin suggests that Gandalf be consulted, Denethor dismisses the suggestion and Faramir is left to burn—before almost being literally consumed by fire along with his mad father.
[And here we would suggest that the over-the-top scene of Denethor’s death in the film missed an important point. In the book, it is clear that what drove Denethor to try to set up a kind of Viking funeral for himself and his son was the palantir by which his mind was poisoned by a Sauron whose influence over him he fatally underestimated. And what a wonderfully spooky moment JRRT describes when the orb survives the fire which destroys the Steward:
“And it was said that ever after, if any man looked in that Stone, unless he had a great strength of will to turn it to other purpose, he saw only two aged hands withering in flame.” (The Return of the King, Book Five, Chapter 7, “The Pyre of Denethor”)]
We will return to Faramir, but, first, we want to look at two more woundings, both occurring almost in the same moment: when Eowyn and Merry face the chief of the Nazgul.

In confronting the Witch King, Eowyn suffers what might seem a perfectly ordinary battle wound in a world of hand-to-hand combat such as this:
“Out of the wreck rose the Black Rider, tall and threatening, towering above her. With a cry of hatred that stung the very ears like venom he let fall his mace. Her shield was shivered in many pieces and her arm was broken; she stumbled to her knees.” (The Return of the King, Book Five, Chapter 6, “The Battle of the Pelennor Fields”) 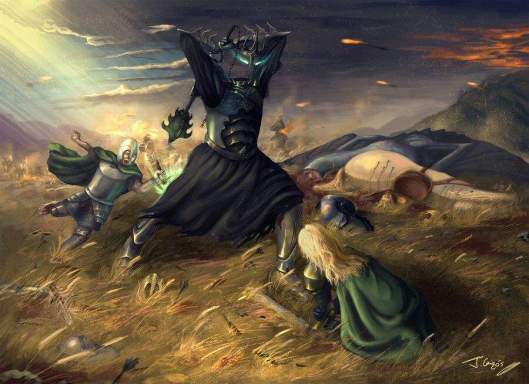 Eowyn is saved from the Nazgul by Merry, who “had stabbed him from behind, shearing through the black mantle, and passing up beneath the hauberk had pierced the sinew in his mighty knee.”
Combined with Eowyn’s final blow at the wraith’s face, this destroyed what we presume was an undead being, but, in return, both Merry and Eowyn take an invisible wound, something which the medical people of Minas Tirith can only observe:
“But now their art and knowledge were baffled; for there were many sick of a malady that would not be healed; and they called it the Black Shadow, for it came from the Nazgul. And those who were stricken with it fell slowly into an ever deeper dream, and then passed into silence and a deadly cold, and so died. And it seemed to the tenders of the sick that on the Halfling and on the Lady of Rohan this malady lay heavily.” (The Return of the King, Book Five, Chapter 8, “The Houses of Healing”)
Eowyn and Merry (and Faramir) have been taken to “the Houses of Healing”, which, in our world, would be a hospital, something which, in our Middle Ages, would either have been part of a monastery/cloister, or were a private foundation, supported by charitable donations.

Medical people there could certainly have set Eowyn’s broken arm, even sealing it in plaster to keep it immobile, but the Black Shadow would have been as difficult for them as for the healers in Minas Tirith. Comas were recognized in the Middle Ages, but there was little to be done: apparently, comatose people lose the swallowing function, which means that someone in that condition would die of dehydration, probably within a few days (speed of dehydration depends upon many factors, as well as the individual, but the longest we’ve seen is about 10 to 12 days).
To their credit, those in the Houses of Healing tried to do something by observation:
“Still at whiles as the morning wore away they [Eowyn and Merry] would speak, murmuring in their dreams; and the watchers listened to all they said, hoping perhaps to learn something that would help them to understand their hurts.”
But the Shadow spreads quickly as day fades:
“But soon they began to fall down into the darkness, and as the sun turned west a grey shadow crept over their faces.”
And there is the added difficult of Faramir, who “burned with a fever that would not abate.”
At this point, both medieval healers and those in Minas Tirith were stumped—until another factor was added. In fact, two.
Plants have been used since ancient times for medicine world-wide, so it should be no surprise that Middle-earth should have a parallel. In this instance, the plant is called “kingsfoil” or athelas. (The “foil” in the first name is—in English—based upon the Old French foil/foille, “leaf”, which comes, in turn, from a Latin word for leaf, folium—perhaps JRRT was inspired by the plant called “cinquefoil” = “fiveleaf”. Athelas is also a compound, based upon Sindarin athaya, “helpful” and lass, “leaf”.) [There’s a really useful posting on possible our world parallels for this herb and we provide the LINK here.]
When Aragorn tended to Frodo’s Morgul-knife wound earlier in The Lord of the Rings, we would have seen its use then:
“He threw the leaves into boiling water and bathed Frodo’s shoulder. The fragrance of the steam was refreshing, and those that were unhurt felt their minds calmed and cleared. The herb had also some power over the wound, for Frodo felt the pain and also the sense of frozen cold lessen in his side…” (The Fellowship of the Ring, Book One, Chapter 12, “Flight to the Ford”)
This is not all to the treatment, however. Just before he uses the herb, Aragorn appears to employ some sort of counter-spell to that which was on the knife:
“He sat down on the ground, and taking the dagger-hilt laid it on his knees, and he sang over it a slow song in a strange tongue. Then setting it aside, he turned to Frodo and in a soft tone spoke words the others could not catch.”
This pattern of speech and herb is now employed in the healing not only of Eowyn and Merry, but of Faramir, as well, and forms both a part of the movement towards the eventual defeat of Sauron and the return of light to Middle-earth, and of the confirmation of Aragorn as the rightful heir to the throne. As the herb-master, when called upon by Aragorn to produce the herb, recites:
“When the black breath blows
And death’s shadow grows
And all lights pass,
Come athelas! Come athelas!
Life to the dying
In the king’s hand lying!”
Previously, the herb-master says “it has no virtue that we know of, save perhaps to sweeten a fouled air, or to drive away some passing heaviness…old folk still use an infusion of the herb for headaches.” Now, however, Aragorn proceeds to use it three times in quick succession, along with something else, to bring back the three so sunk towards death:
“Now Aragorn knelt beside Faramir, and held a hand upon his brow. And those that watched felt that some great struggle was going on. For Aragorn’s face grew grey with weariness; and ever and anon he called the name of Faramir, but each time more faintly to their hearing, as if Aragorn himself was removed from them, and walked afar in some dark vale, calling for one that was lost.”
Moving to Eowyn, Aragorn uses the athelas again, but summons her, as well:
“Then, whether Aragorn had indeed some forgotten power of Westernesse, or whether it was but his words of the Lady Eowyn that wrought on them, as the sweet influence of the herb stole about the chamber it seemed to those who stood by that a keen wind blew through the window…”

And a third time, with Merry: “I came in time, and I have called him back.”
We’ll end the second part of our discussion of woundings here—or almost. There is one more patient whom it appears even the king can’t heal:
“But I have been too deeply hurt, Sam.” Says Frodo. “I tried to save the Shire, and it has been saved, but not for me. It must often be so, Sam, when things are in danger; some one has to give them up, lose them, so that others may keep them.” (The Return of the King, Book 6, Chapter 9, “The Grey Havens”)

And yet, there is perhaps the promise of healing beyond Middle-earth, something which may even bear a faint suggestion of the scent of Athelas:
“And the ship went out into the High Sea and passed on into the West, until at last on a night of rain Frodo smelled a sweet fragrance on the air and heard the sound of singing that came over the water…the grey rain-curtain turned all to silver glass and was rolled back, and he beheld white shores and beyond them a far green country under a swift sunrise.”
Thanks, as ever, for reading.
MTCIDC
CD