We are very visual people. A picture in a museum, an illustration in a book, something in a film, will always catch our eye and sometimes inspire our writing.

This was certainly the case in our first book, Across the Doubtful Sea, where the drawings and paintings from the three Cook expeditions to the South Seas (1768-1779) filled us with a combination of wonder and curiosity. Although they were sometimes strongly influenced by period ideas of the sublime, here were images as close to historical photos as we would ever see.

In the case of our second book, The Good King’s Daughter, however, because it was set in a world based loosely upon the medieval Russia of fairy tales, we looked to other sources, particularly those later-19th and 20th-century Russian artists who illustrated moments from the Russian heroic songs (byliny) and from the fairy and folktales themselves.

In our last, we showed you a few images from the work of perhaps the most famous (outside Russia, at least) illustrator, Ivan Bilibin (1876-1942). Pictures like “The Island of Buyan” (1905): 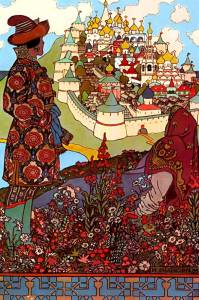 As you can see from the pictures below, Vasnetsov can move from the grandly (and grimly) heroic world of the byliny and its bogatyr (epic hero) to a more fanciful world of fairy tales like The Firebird (but still rather grim and grand). 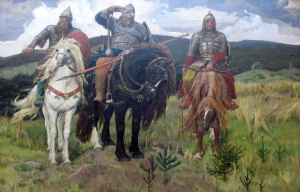 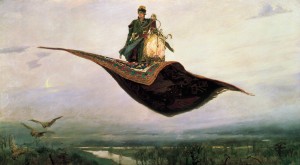 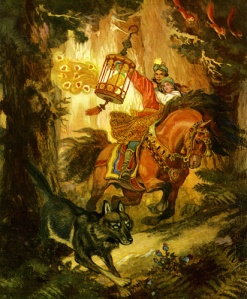 What inspires us in these pictures? To a degree, it’s what attracts us to the fairy/folktales: the strange scenes (even when you know the story), the swirl of color, that suggestion of a complex world of patterns from a different time and place, one in which there were yagas and firebirds and heroes who could be helped by wise animals.

And you, reader, do these pictures inspire you?

at archive.org. They are clearly older books, but, for those on a budget, they can provide a starting place into a rich world worth visiting.