Welcome, dear readers, to the third part of our series on doors and entryways in JRRT’s The Hobbit and The Lord of the Rings.

We began, several postings ago, by writing that we were intrigued by Bilbo’s statement to Frodo: “It’s a dangerous business, Frodo, going out your door.” (The Fellowship of the Ring, Book 1, Chapter 3, “Three is Company”)

It made us want to look at doors (to which we quickly added entryways of all sorts) in Tolkien and, in doing so, we’ve come up with a very crude classification system, in which there were two kinds of doors, those which seemed to promise safety and those through which you might be in danger. And a major component of such places seems to be a challenge, and a challenger of some sort.

At the end of our second posting, we had come to the breaking up of the Fellowship and now we want to continue, having a look at what could be seen as good examples of what we mean along the way.

Because of the major split in the story, we decided to follow Aragorn, Gimli, and Legolas first.

The first part of their adventure takes place across open country or in Fangorn Forest. It’s only when they, with Gandalf, arrive at Edoras that we see the pattern fall into place.

But here we wondered if we should add an extra subcategory, linguistic challenge. We’ve already seen the western gates of Moria and the need to read Elvish and to know the word for friend, and now we have the gates of Edoras

and a suspicious guard of Rohirrim:

“There sat many men in bright mail, who sprang at once to their feet and barred the way with spears. ‘Stay, strangers here unknown!’ they cried in the tongue of the Riddermark.” (The Two Towers, Book 3, Chapter 6, “The King of the Golden Hall”)

[We wonder, by the way, if the chapter’s title owes something to John Ruskin’s 1841/51 fairy tale “The King of the Golden River”, in which a major figure has been changed through evil magic, but is freed and eventually helps the underdog hero…]

As he was (eventually) up to the challenge of the gate of Moria, so is Gandalf up to this and challenges them in return:

“ ‘Well do I understand your speech,’ he answered in the same language; ‘yet few strangers do so. Why then do you not speak in the Common Tongue, as is the custom in the West, if you wish to be answered?’ “

After a little parleying in this manner, Gandalf and his companions are allowed to enter and sent up to Meduseld, where there is a second challenger, the Doorward Hama.

Here, after a brief repetition of the previous language challenge, things relax: “Then one of the guards stepped forward and spoke in the Common Speech.” After a tussle about leaving weapons behind (and Gandalf escapes this with his staff), they are permitted into the hall and the scene continues.

After the battle of Helm’s Deep, Denethor, Gandalf, and the rest of the company ride to Isengard, only to find there:

“…ruined gates. There they saw close beside them a great rubble-heap; and suddenly they were aware of two small figures lying on it at their ease, grey-clad, hardly to be seen among the stones. There were bottles and bowls and platters laid beside them…” (The Two Towers, Book 3, Chapter 8, “The Road to Isengard”)

It’s Merry and Pippin, of course, who describe themselves as “doorwardens”, just as Hama was at Meduseld. The difference is, instead of barring the door and challenging those who would enter, they are welcoming and comical in their lordly self-indulgence. This seems to turn the pattern on its head, and, although it’s the only time such a thing appears, we believe that it is an example of another subcategory, that of parody. It has the elements of other occasions, but, here, the door is a ruin and the guards seem slightly tipsy, rather than menacing, as well as very glad to see those who come to their ward.

In contrast to this merriness, there is stony silence at the next door:   The Paths of the Dead. 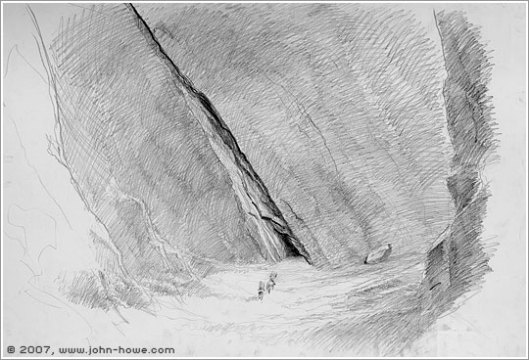 The challenge seems to be in the very air itself:

“And so they came at last deep into the glen; and there stood a sheer wall of rock, and in the wall the Dark Door gaped before them like the mouth of night. Signs and figures were carved above its wide arch too dim to read, and fear flowed from it like a grey vapour.” (The Return of the King, Book 5, Chapter 2, “The Passing of the Grey Company”)

It is Aragorn who accepts the challenge and leads the group through what, in the film, is a kind of funhouse of skulls and greenish figures,

But, to us readers, what we think is much more disturbing is that there is no more than a restless murmur, which we hear through the dauntless, but quivering Gimli—

“…but if the Company halted, there seemed an endless whisper of voices all about him, a murmur of words in no tongue he had ever heard before.”

And, at the end of their passage, it is Aragorn who is the challenger—not to block those murmurers, but to invite them:

“ ‘Keep your hoards and your secrets hidden in the Accursed Years! Speed only we ask. Let us pass, and then come! I summon you to the Stone of Erech!’ “

We can see in this multiple ends: first, it fits the pattern of confrontations at doors (all feel the sense of Something There and must rise to the challenge, conquering their fear); second, it provides a route for Aragorn’s strategy: to gain supernatural allies on the way to natural ones along the southern seacoast; third, it underlines Aragorn’s right to the kingship: only he has the knowledge and authority to call up the long-dead for his purposes.

Our last challenge of this posting is at what is perhaps the most dramatic moment in the attack upon Minas Tirith. Grond the ram has, with the aid of the Lord of the Nazgul, burst open the great gate and the Wraith is about to enter when he encounters:

‘You cannot enter here,’ said Gandalf, and the huge shadow halted. ‘Go back to the abyss prepared for you! Fall into the nothingness that awaits you and your Master. Go!’ ” (The Return of the King, Book 5, Chapter 4, “The Siege of Gondor”)

But—then? We admit it—we shamelessly want a cliffhanger here. And so we’ll stop—till our next, in which we’ll finish the story—we promise!—and provide a breakdown of all of the doors and entryways in a chart, as well.

Thanks, as always, for reading—and we’re sorry that we gave in to temptation, but, as novelists ourselves, we couldn’t resist!