Terra Australis. Although this looks like it might be Australia, and the name Australia comes from it, in the earlier years of the 18th century, it wasn’t. Instead, it was another continent thought to be in the far south, where our Antarctica is. The idea for such a continent was as old as Aristotle. His idea was that, because there was a northern landmass, there should be an equal one to the south.

In our fictional world, Terra Australis really is a continent in the south. Unlike Antarctica, it is not totally covered in ice and snow– but some areas are. Why this is so forms part of the story of our series of three novels. Here are three images to give you an idea where we started. The first, as you can see, is a very old map, and it imagines Terra Australis the way Aristotle must have. 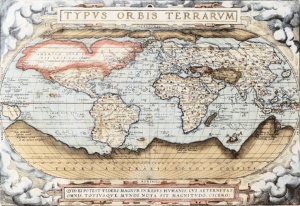 The second and third are maps of our Antarctica– but imagine it without those huge ice fields, and you can see the rock underneath. Our Terra Australis is founded upon the rock of Antarctica.

Thank you for reading,

2 thoughts on “Where Did We Go From There?”