Welcome, as ever, dear readers!

This posting is a first:  a guest contribution.  It’s from our excellent friend, Erik, who is the man working on the map of Middle-earth (stay tuned, as always, for more on this in the future).  We don’t claim to be JRRT experts, being more generalists of adventure, so this is a more detailed look at something about which we wrote a few weeks ago.  We hope that you enjoy it as much as we did.

CD’s post of 22 July titled “How do we get there?” explores the use and non-use of maps at the end of the Third Age in Middle-earth, concluding from evidence in The Hobbit that small-scale maps (that is, maps that show a great deal of territory) may not have existed to any appreciable extent, and that the few far-ranging travellers must have relied primarily upon their own memories.

While it’s certainly true that — notwithstanding Gandalf’s temporary setback at one particular intersection of passages in Moria — widely travelled characters in both The Hobbit and The Lord of the Rings seem indeed to have prodigious mental models of territories that they have crossed years or even decades earlier, maps constitute a larger portion of the cultural fabric of late Third-Age Middle-earth than is apparent at first blush.

DC’s students quite naturally brought up Thror’s map in The Hobbit as one example, but quickly shot it down again as “not useful” — which is fair enough in terms of making the nearly thousand-mile journey from the Shire to the Lonely Mountain, given that it could be used as a guide only on the last stage of their journey: from the easternmost fringe of Mirkwood. 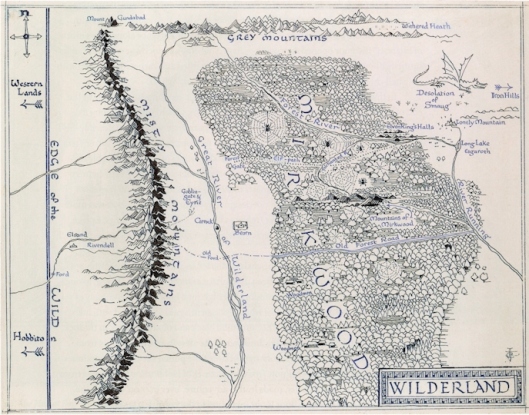 The other obvious map in The Hobbit is Tolkien’s map of Wilderland — roughly, the area from just west of Rivendell east through the River Running, and from the Grey Mountains in the north down through two-thirds of Mirkwood. This map too, though, should be discounted — albeit for a different reason altogether. At first look, this would be a very useful map for the Dwarves and Bilbo to follow. Looking more closely, though, one can see that it’s almost too useful. Elrond? Beorn? [Eagle’s] Eyrie? And Hobbiton‽ No Middle-earthly map other than those from the Shire would include Hobbiton, and none at all would include the Eyrie. We can conclude that this is a map from our own world: it’s not meant to be a reproduction of a Middle-earth map — and to corroborate this, we can find an early form of Tolkien’s own JRRT monogram in the lower right corner.

But there are other maps hidden in the text of The Hobbit. The Dwarves complain, for example, on the road to Rivendell that “the old maps are no use: things have changed for the worse and the road is unguarded.” Their grumbling about the old maps implies either that there are no new maps to be had or perhaps that there are new maps but that the Dwarves didn’t have them. 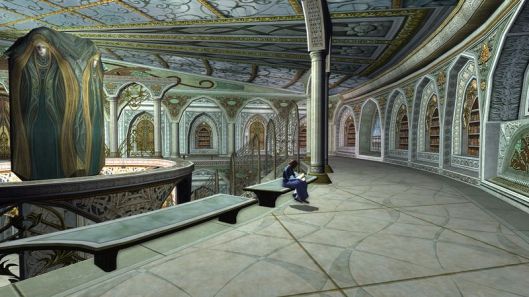 I don’t remember any mention of maps in Rivendell within The Hobbit, but they’re mentioned quite clearly in The Lord of the Rings.

“Aragorn and Gandalf walked together or sat speaking of their road and the perils they would meet; and they pondered the storied and figured maps and books of lore that were in the house of Elrond. Sometimes Frodo was with them; but he was content to lean on their guidance….” [LRC 2.03.050]

So Gandalf and Bilbo (and remember, we are told near both the beginning and the end of The Hobbit that Bilbo “loved maps”), and perhaps some of the Dwarves, would have had the chance to consult maps in Rivendell. And in fact, the narrator reports at the close of “A Short Rest” (the Rivendell chapter of The Hobbit) that the company

“rode away … with a knowledge of the road they must follow over the Misty Mountains to the land beyond.”

Since we’ve brought up The Lord of the Rings, this might be a good moment to mention some of the Hobbits other than Bilbo. Was Bilbo unusual in his love of maps?

After Bilbo left Bag End, Frodo “looked at maps, and wondered what lay beyond their edges: maps made in the Shire showed mostly white spaces beyond its borders.” [LRC 1.02.008] This tells us, of course, that there were at least local maps made in the Shire, and that Frodo enjoyed looking at them — so in this he appears to take after Bilbo. 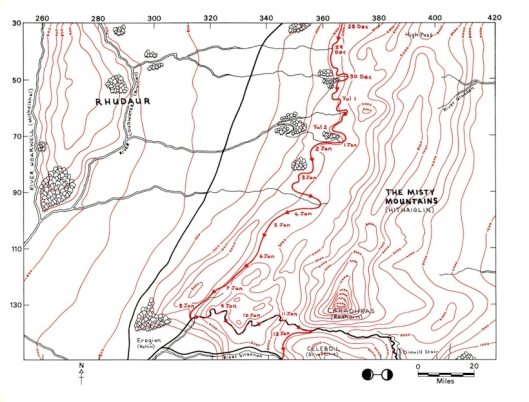 As the new Fellowship travelled south from Rivendell, Gandalf asked Pippin (who had a good enough sense of direction and geography that he knew to be puzzled when the Misty Mountains were seen ahead of them when they were ostensibly heading south):

“‘There are many maps in Elrond’s house, but I suppose you never thought to look at them?’

And here we can see both further corroboration that Frodo shared Bilbo’s (and, implicitly, Gandalf’s) facility with maps, and also an indication that Pippin probably didn’t. But perhaps more interestingly, we’re made aware that maps were important enough that Pippin looked at them — more than once — even though he didn’t have a head “for that sort of thing.”

After their defeat by Caradhras — yet before they enter Moria — comes my favorite map reference, in the voice of the narrator just after Sam expressed his hope of their imminent arrival at Mount Doom:

“Maps conveyed nothing to Sam’s mind, and all distances in these strange lands seemed so vast that he was quite out of his reckoning.” [LRC 2.03.128] 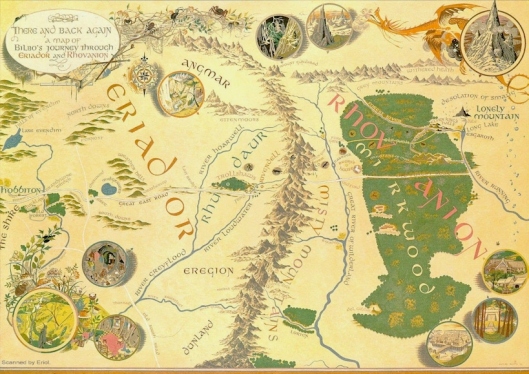 Of course, when you get right down to it, the route that Bilbo, Gandalf, and the Dwarves would’ve planned to take was actually incredibly simple — rather like taking Interstate 70 across the United States; no map should really have been needed for the vast majority of the journey “there and back again,” for the East Road led right from the front door of Bag End all the way to the River Running, as Frodo quoted Bilbo as often saying:

“Do you realize that this is the very path that goes through Mirkwood, and that if you let it, it might take you to the Lonely Mountain…?” [LRC 1.03.075]

The path didn’t go quite that far — though it was indeed the same path as the “Mountain Path” through the Misty Mountains pictured above, and also as the “Old Forest Road” through Mirkwood. It ended at the River Running, which could easily be followed upstream past Esgaroth directly to Erebor (the Lonely Mountain).

“had warned them that that way was now often used by the goblins, while the forest-road itself, he had heard, was overgrown and disused at the eastern end and led to impassable marshes where the paths had long been lost. Its eastern opening had also always been far to the south of the Lonely Mountain, and would have left them still with a long and difficult northward march when they got to the other side.”

Instead, “north of the Carrock the edge of Mirkwood drew closer to the borders of the Great River, and though here the Mountains too drew down nearer, Beorn advised them to take this way; for at a place a few days’ ride due north of the Carrock was the gate of a little-known pathway through Mirkwood that led almost straight towards the Lonely Mountain.

Presumably this “little-known” path was not on the “old maps” in Rivendell, or they would have had that as their plan from the get-go. And this brings up the question of where the map-makers had got to. Why were “old maps” the only ones around?

CD has written before about the deterioration, diminution, and dwindling of the North Kingdom and indeed of most of the west of Middle-earth at the end of the Third Age. Without a thriving population and state, both the demand and the industrial and cultural infrastructure required for creating up-to-date small-scale maps would be lacking.

I’ll leave you with a final puzzlement that I’ll be thinking about: just why was the Old Forest Road built to reach the River Running at a place where we have no map evidence for any settlement or population center? Who built it? When? And whom was it built to serve?

Thank you, Erik, and, as always, thank you, good readers!

Stay well, and be assured of