“Your father’s lightsaber.  This is the weapon of a Jedi Knight.  Not as clumsy or random as a blaster.  An elegant weapon…for a more civilized age.”

Welcome, dear readers, as always.  We’ve had a few rather grim postings recently, so we thought that we would lighten up a bit with a positive one…

If you’re a Star Wars fan, you know what we’ve just quoted above and where it comes from:  Obi-Wan has just handed Luke something about whose owner he will tell less than the truth. 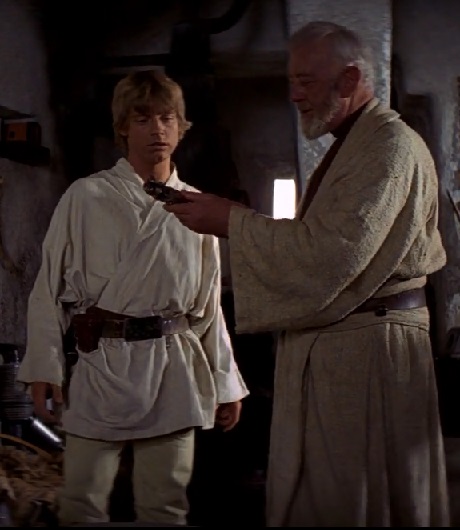 On one level, it is what he says it is—it’s a lightsaber, of which we see many, handled not only by the Jedi, but also by their opponents, the Sith. 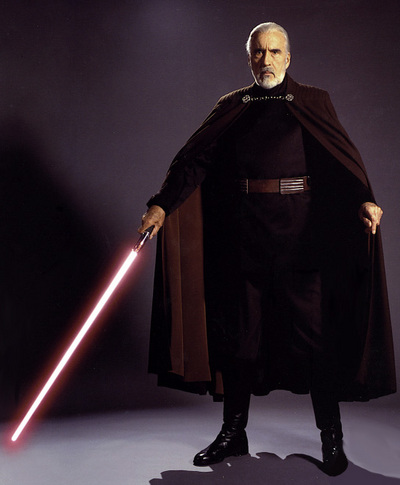 By his emphasis upon “the weapon of a Jedi Knight”, and contrasting it with a blaster, however, Obi-wan is offering it as more than a weapon, but as a symbol:  making us wonder, without one, is a Jedi really a Jedi?

A few months ago, we posted a piece about “Sting”, the weapon which Bilbo acquired from the lair of the trolls in The Hobbit:  “…Bilbo took a knife in a leather sheath.  It would have made only a tiny pocket-knife for a troll, but it was as good as a short sword for the hobbit.”  (The Hobbit, Chapter 2, “Roast Mutton”)

It stood Bilbo in good stead several times, both in keeping Gollum at a respectful distance 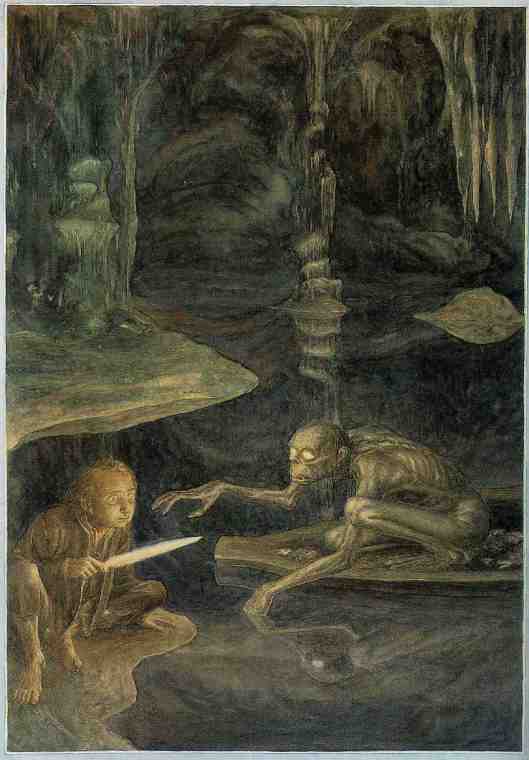 and also in dealing with the Mirkwood spiders. 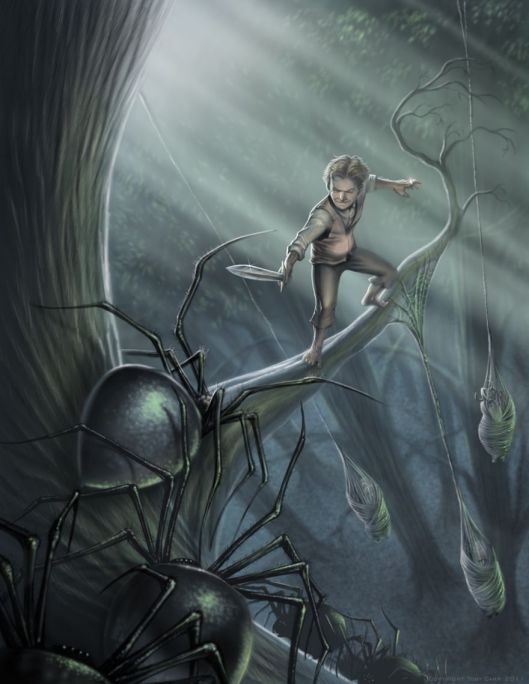 (A very interesting illustration by Toby Carr–we’d like to see more of his work.)

Bilbo passes it on to Frodo, but, beyond stabbing a goblin in the foot with it and threatening Gollum, Frodo never really employs it—although Sam does good service with it when he stabs Shelob. 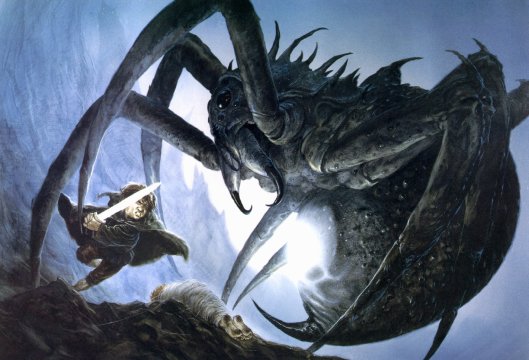 It’s clear, however, that Frodo has no real interest in using it and, by the end of The Lord of the Rings, has become very wary of violence in general:

“Frodo had been in the battle, but he had not drawn sword, and his chief part had been to prevent the hobbits in their wrath at their losses, from slaying those of their enemies who threw down their weapons.”  (The Return of the King, Book Six, Chapter 8, “The Scouring of the Shire”)

For Bilbo, Sting had been a useful tool (even though made in Gondolin, like Orcrist and Glamdring, probably for a higher purpose).  For Frodo, it ultimately appears to be something to discard.  For neither is it a symbol of something greater, as Narsil/Anduril is, for Aragorn.

Here, we see a very ancient sword, made in the First Age, but which passes in time to Elendil, who uses and loses it in the battle on the slopes of Orodruin, in the Second Age, when it breaks under him during his final struggle with Sauron.  His son, Isildur, uses the sherd of the sword to cut the Ring from Sauron’s hand.  Though broken, the sword remains in Isildur’s family, until finally inherited by Aragorn, in the Third Age.  Through age and use, then, this has become a symbol of the original Numenorean kingship which will eventually be restored, at the final defeat of Sauron in The Lord of the Rings, as the prophecy quoted by Gandalf in his letter to Frodo predicts:

“All that is gold does not glitter,

Not all those who wander are lost;

The old that is strong does not wither,

Deep roots are not reached by the frost.

From the ashes a fire shall be woken,

A light from the shadows shall spring;

Renewed shall be blade that was broken,

The crownless again shall be king.”

(The Fellowship of the Ring, Book One, Chapter 10, “Strider”)

The fact that the sword is mentioned—and that it will be reforged, meaning that it, too, will be restored–shows its importance to that restoration, to which we would add:  and also to the ultimate overthrow of Sauron, this time perhaps not as a sword which will harm him physically, but as a reminder of his previous defeat, as well as a threat of what is to come.  Aragorn has used the palantir which Saruman lost and which Gandalf has put into Aragorn’s care, as he reports:

“The eyes of Orthanc did not see through the armour of Theoden; but Sauron has not forgotten Isildur and the sword of Elendil.  Now in the very hour of his great designs the heir of Isildur and Sword are revealed; for I showed the blade re-forged to him.  He is not so mighty yet that he is above fear; nay, doubt ever gnaws him.” (The Return of the King, Book Five, Chapter 2, “The Passing of the Grey Company”)

Thus, with the reforged sword, Aragorn shows both himself and a prophesied symbol of kingship and of Aragorn’s right to that kingship, as he asserts when he receives that same palantir from Gandalf:

“There is one who may claim it by right.  For this assuredly is the palantir of Orthanc from the treasury of Elendil, set here by the Kings of Gondor.  Now my hour draws near.  I will take it.” (The Two Towers, Book Three, Chapter 11, “The Palantir”)

This idea of symbol brings us back to the question of Luke and his father’s lightsaber.

[And a footnote here—

Actually, a saber, perhaps originally a Turkic weapon, but which comes into the West from Hungary, 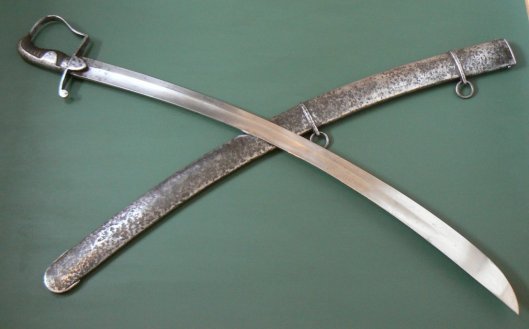 It belongs to a variety of weapon called a “backsword” meaning a kind of sword which is sharpened along only one side.  It may have a sharpened point for stabbing—as this 1907 saber exercise shows— 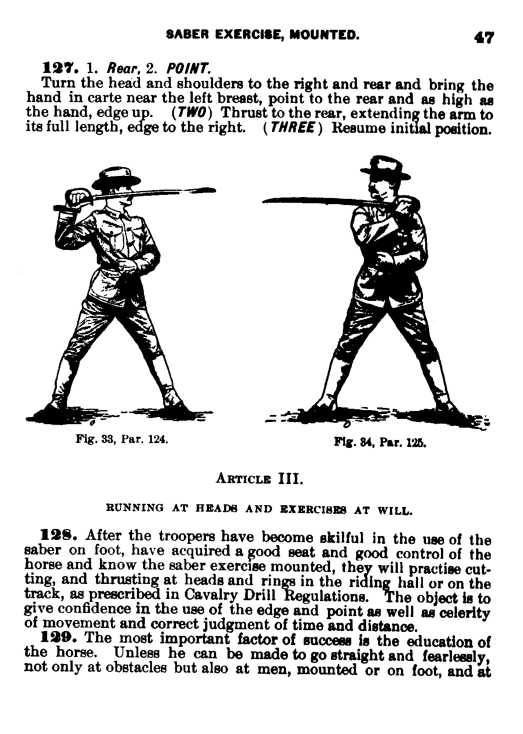 but its main job is for slashing— 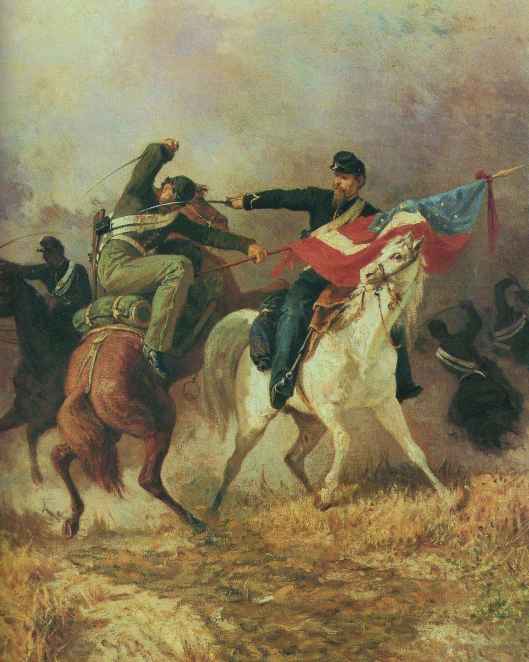 Originally, we are told, the lightsaber was called a “laser sword”, which is more accurate, in terms of how it looks and how it’s used—more like a rapier, which has both sharpened blade and point— 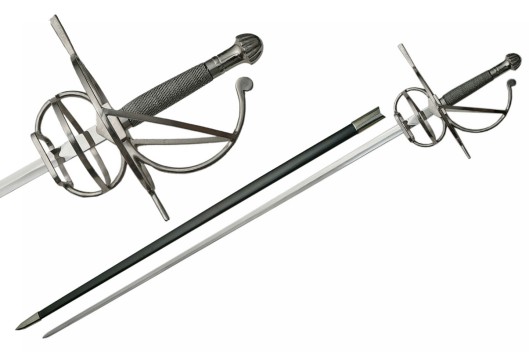 The importance of the lightsaber for Luke is underlined by the fact that, after he’s lost his father’s (as well as his hand) in his first duel with…his father, 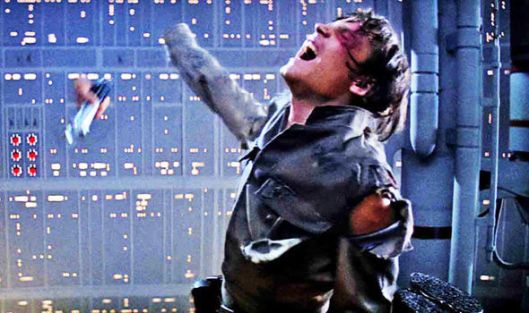 he makes another, which is, in fact, one stage from padawan to Jedi Knight in the Jedi tradition. 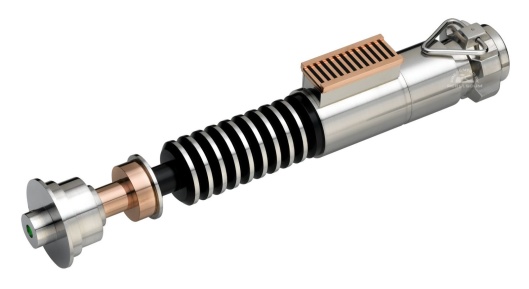 When Luke surrenders to Darth Vader in The Return of the Jedi, 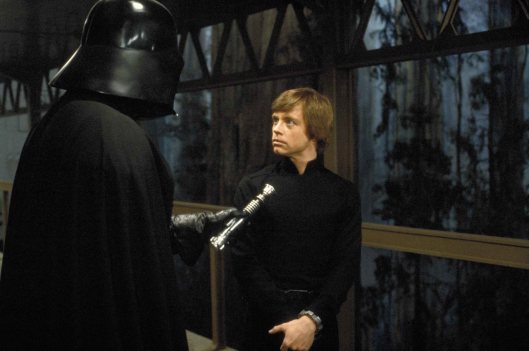 Vader comments upon this:

“Vader looks down from Luke to the lightsaber in his own black-gloved hand. He seems to ponder Luke’s words.

I see you have constructed a new lightsaber.

Vader ignites the lightsaber and holds it to examine its humming, brilliant blade.

Your skills are complete.  Indeed, you are powerful, as the Emperor has foreseen.”

What the Emperor has not foreseen, however, is what use Luke makes of this weapon.  Although he fights a second duel with his father and actually defeats him, cutting off his right hand in a mirror of what had happened to him in his first duel, 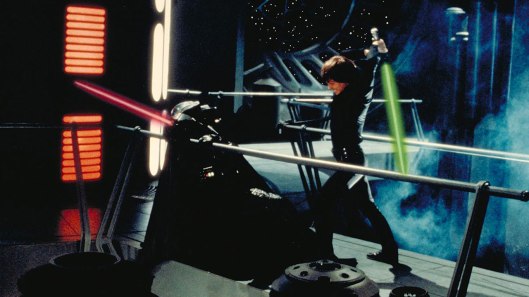 when told by the Emperor to kill his father, 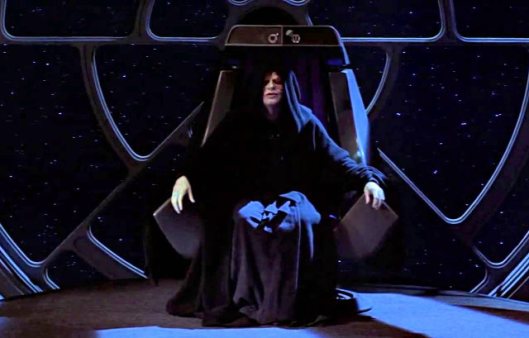 Luke refuses, throwing his lightsaber aside. 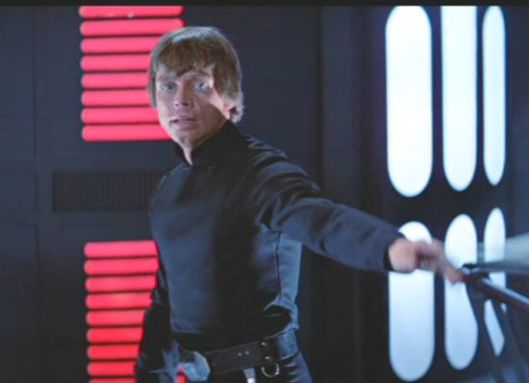 And what he says then suggests that perhaps the lightsaber may be a symbol of being a Jedi, but, unlike Anduril, its symbolic power may not be so great:

Good!  Your hate has made you powerful.  Now fulfill your destiny and take your father’s place at my side!

Luke looks at his father’s mechanical hand, then to his own mechanical, black-gloved hand, and realizes how much he is becoming like his father.  He makes a decision for which he has spent a lifetime in preparation.  Luke steps back and hurls his lightsaber away.

Never!  I’ll never turn to the dark side.  You’ve failed, Your Highness.  I am a Jedi, like my father before me.”

And this, in turn, answers our earlier question:  is a Jedi a Jedi without a lightsaber?   As Obi-wan has said, when he symbolically offers a Jedi’s life to Luke, it is the weapon of a Jedi Knight.  When Luke casts his aside, defying the Emperor and inviting his own death, we see that, although a lightsaber is part of what makes a Jedi, what really makes him one is more complex, something which the Emperor, who killed his own master, Darth Plagueis, in his sleep, could never understand and this lack of understanding leads to his own destruction (well, temporary destruction, as he’ll reappear in Star Wars IX).

Thanks, as always, for reading and, as ever,

In fact, even Obi-wan himself finds a blaster more useful, at least once.  When confronting General Grievous, who has four lightsabers, 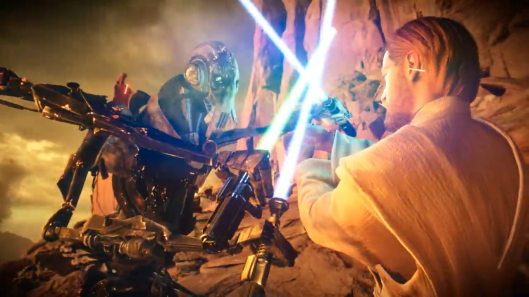 on Utapau, he loses his own, finds a handgun and 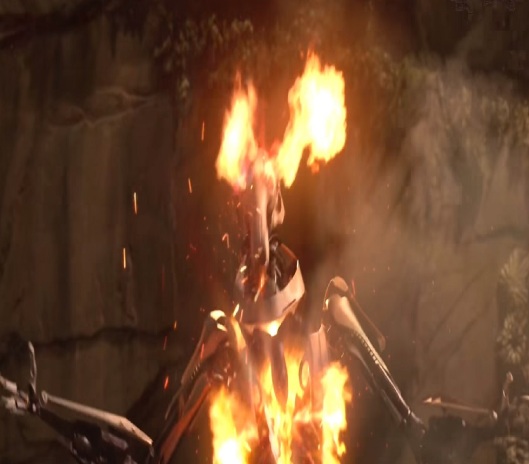 “The JEDI fires several blasts in the stomach area of the alien Droid, and he EXPLODES from the inside out.  The smoldering Droid falls to the ground.  OBI-WAN has killed GENERAL GRIEVOUS.  He pulls himself up onto the platform and walks by the destroyed carcass.

We apologize for the use of italic throughout–something happened in the copying of quotations process and we don’t seem to be able to fix it.  It’s an elegant typeface, however, and perhaps it fits the lightsaber idea?