Everybody who reads beyond The Hobbit and The Lord of the Rings probably knows this passage from a 1955 letter to the poet W.H. Auden (1907-1973) : 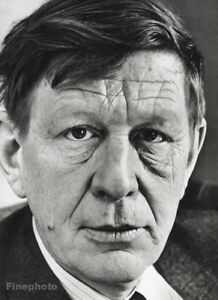 “I mentioned Finnish, because that set the rocket off in its story.  I was immensely attracted by something in the air of the Kalevala, even in Kirby’s poor translation. I never learned  Finnish well enough to do more than plod through a bit of the original, like a schoolboy with Ovid; being mostly taken up with its effect on ‘my language’.” (Letters, 214)

Those same people will also know that the Kalevala is a collection of traditional Finnish mythological stories in verse stitched together into a sort of long epic-like thing by Elias Loennrot, (1802-1884)

a first version being published in 1835, but the longer and standard version in 1849.

Loennrot was, by profession, a doctor, but his hobby was collecting folklore and folksong, a pastime taken up by educated enthusiasts throughout western Europe during the Romantic Era. His informants were mainly country people, both in his district in Finland, then part of the Russian Empire as the Grand Duchy of Finland, and from rural areas which he would visit during his holidays.

One method of performing these songs was for two men to sit on a bench facing each other, to join crossed hands, and to recite back and forth.

There was a basic metre, called by metricists, trochaic tetrameter, which might sound like the Latin name for an exotic plant, but, if we take it apart we have:  tetrameter = four beats in a line; trochaic = having a troche = a foot which can be written like this:  DUM dum.

In Finnish folkverse, this could have a number of little variations, although there was a big one, as well:  sometimes there could be a break (metricists called this a “caesura”—from the Latin verb caedo, “to cut”) between the second and third feet, giving you: DUM dum DUM dum    DUM dum DUM dum.  If you would like to learn more, here’s a LINK which has some useful information about the verse of the poem: https://en.wikipedia.org/wiki/Kalevala

We first met this verse form not in the Kalevala, but in a poem in English, by the famous 19th-century American poet, Henry Wadsworth Longfellow (1807-1882).

Longfellow was the Smith Professor of Modern Languages at Harvard from 1836 to 1854, when he retired to focus on his writing. His command of languages was impressive, including Latin (from boyhood), Spanish, French, Italian, German, Dutch, Danish, Icelandic, and Finnish. He was always in search of subjects, often choosing, for his longer works, North American ones. In 1855, he published Hiawatha,

based upon Native American mythology. (Say it “HEE-uh-wah-thuh”, by the way, as Longfellow explained in a letter.)  The metre wasn’t Native American, however, but Finnish.  Although he had some knowledge of the language, Longfellow had actually read a German translation, by Franz Anton Schiefner (1817-1879)

published in 1852. This translation kept the metre of the original and Longfellow clearly found that it suited his narrative purposes. Here are the opening lines—from which we took the title of this posting:

“Should you ask me, whence these stories?
Whence these legends and traditions,
With the odors of the forest
With the dew and damp of meadows,
With the curling smoke of wigwams,
With the rushing of great rivers,
With their frequent repetitions,
And their wild reverberations
As of thunder in the mountains?”

It’s interesting, then, that the Kalevala, which so enchanted the young Tolkien that he almost lost his scholarship at Oxford because of it (Letters, 87, 214-215), and which was “the original germ of the Silmarillion” (Letters, 86), provided metrical inspiration for Longfellow in one of his most famous works.

And Hiawatha was, in turn, the inspiration for another poem, by another famous (English) Victorian author, Charles Lutwidge Dodgson, “Lewis Carroll” (1832-1898),. 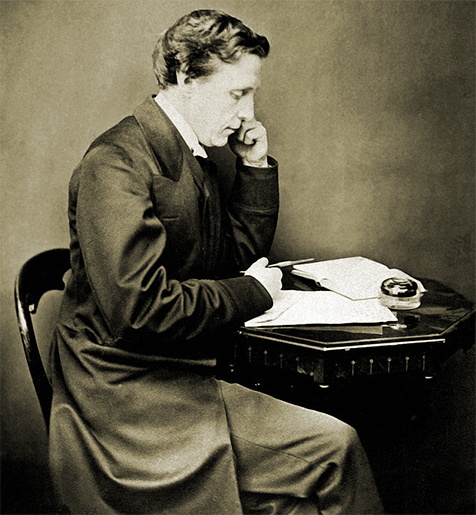 the author of Alice’s Adventures in Wonderland (1865),

Besides being a professor of mathematics and fantasy creator, Dodgson was also a keen amateur photographer.  Here’s his image of another poet, Alfred, Lord Tennyson (1809-1892).

In 1869, he published Phantasmagoria and Other Poems, including a poem entitled “Hiawatha’s Photographing”—and you can see what he’s done, can’t you? In 1883, he republished it in another collection, Rhyme? And Reason?, with the poem illustrated by Arthur B Frost.  Following our theme of  Kalevala influences, we thought that, rather than summarize, we’d simply reprint it here—without the illustrations, which we don’t seem to be able to copy–in hopes to bring a little cheer to what is a pretty grim time.  This is from the 1884 American edition, the LINK to which is right here (where you can see the illustrations for yourself):  https://ia800209.us.archive.org/5/items/cu31924013341049/cu31924013341049.pdf

[In an age of imitation, I can claim no special merit for this slight attempt at doing what is known to be so easy. Any fairly practised writer, with the slightest ear for rhythm, could compose, for hours together, in the easy running metre of ‘The Song of Hiawatha.’ Having, then, distinctly stated that I challenge no attention in the following little poem to its merely verbal jingle, I must beg the candid reader to confine his criticism to its treatment of the subject.]

From his shoulder Hiawatha

Took the camera of rosewood,

Made of sliding, folding rosewood;

Neatly put it all together.

In its case it lay compactly,

Folded into nearly nothing;

But he opened out the hinges,

Pushed and pulled the joints and hinges,

Till it looked all squares and oblongs,

In the Second Book of Euclid.

This he perched upon a tripod—

Crouched beneath its dusky cover—

Mystic, awful was the process.

All the family in order

Sat before him for their pictures:

Each in turn, as he was taken,

Volunteered his own suggestions,

First the Governor, the Father:

Looped about a massy pillar;

And the corner of a table,

Of a rosewood dining-table.

He would hold a scroll of something,

Hold it firmly in his left-hand;

He would keep his right-hand buried

He would contemplate the distance

With a look of pensive meaning,

As of ducks that die in tempests.

Grand, heroic was the notion:

Yet the picture failed entirely:

Failed, because he moved a little,

Moved, because he couldn’t help it.

Next, his better half took courage;

She would have her picture taken.

She came dressed beyond description,

Dressed in jewels and in satin

Far too gorgeous for an empress.

Gracefully she sat down sideways,

With a simper scarcely human,

Holding in her hand a bouquet

Rather larger than a cabbage.

All the while that she was sitting,

“Am I sitting still?” she asked him.

“Is my face enough in profile?

Shall I hold the bouquet higher?

Will it come into the picture?”

And the picture failed completely.

Next the Son, the Stunning-Cantab:

He suggested curves of beauty,

Curves pervading all his figure,

Till they centered in the breast-pin,

Centered in the golden breast-pin.

He had learnt it all from Ruskin

(Author of ‘The Stones of Venice,’

‘Modern Painters,’ and some others);

And perhaps he had not fully

But, whatever was the reason,

All was fruitless, as the picture

Ended in an utter failure.

Next to him the eldest daughter:

Only asked if he would take her

With her look of ‘passive beauty.’

Her idea of passive beauty

Was a squinting of the left-eye,

Was a drooping of the right-eye,

Was a smile that went up sideways

To the corner of the nostrils.

Hiawatha, when she asked him,

Took no notice of the question,

Looked as if he hadn’t heard it;

But, when pointedly appealed to,

Smiled in his peculiar manner,

Coughed and said it ‘didn’t matter,’

Bit his lip and changed the subject.

Nor in this was he mistaken,

As the picture failed completely.

So in turn the other sisters.

Last, the youngest son was taken:

Very rough and thick his hair was,

Very round and red his face was,

Very dusty was his jacket,

And his overbearing sisters

Called him names he disapproved of:

And, so awful was the picture,

In comparison the others

To have partially succeeded.

Tumbled all the tribe together,

(‘Grouped’ is not the right expression),

And, as happy chance would have it

Did at last obtain a picture

Where the faces all succeeded:

Each came out a perfect likeness.

Then they joined and all abused it,

As the worst and ugliest picture

They could possibly have dreamed of.

‘Giving one such strange expressions—

Really any one would take us

(Any one that did not know us)

For the most unpleasant people!’

(Hiawatha seemed to think so,

Seemed to think it not unlikely).

All together rang their voices,

As of dogs that howl in concert,

As of cats that wail in chorus.

But my Hiawatha’s patience,

His politeness and his patience,

And he left that happy party.

Neither did he leave them slowly,

With the calm deliberation,

Of a photographic artist:

But he left them in a hurry,

Left them in a mighty hurry,

Stating that he would not stand it,

What he’d be before he’d stand it.

Hurriedly he packed his boxes:

On a barrow all his boxes:

Hurriedly he took his ticket:

Hurriedly the train received him:

Thanks for reading, as ever, stay well, and