Welcome, as ever, dear readers.  In this posting, we are taking a break from fictions about wars among the stars to look at wars a little closer to home…

In 1871, there was a new power in western Europe:  the first German Empire. 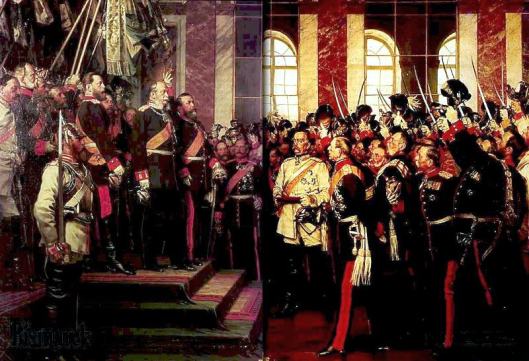 Until 1871, this had been the Kingdom of Prussia and its allies, a series of small and large German states.  In the late summer and fall of 1870, this coalition had plowed through the armies of Napoleon III’s France, forcing Napoleon to abdicate and capturing Paris. 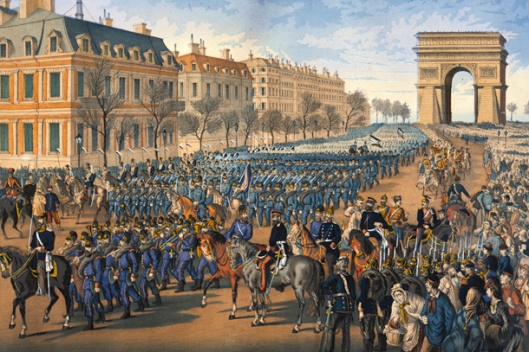 Such a near-sudden change in the world and especially the rapid defeat of what had been considered one of the major players in western European politics alarmed the rest of Europe:  what would this new German Empire do next? 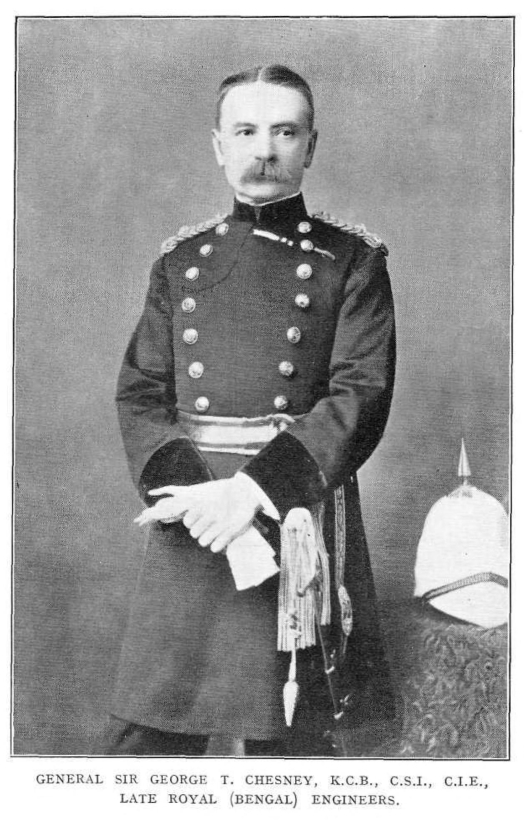 and entitled “The Battle of Dorking”, it was so popular that it soon appeared in pamphlet form 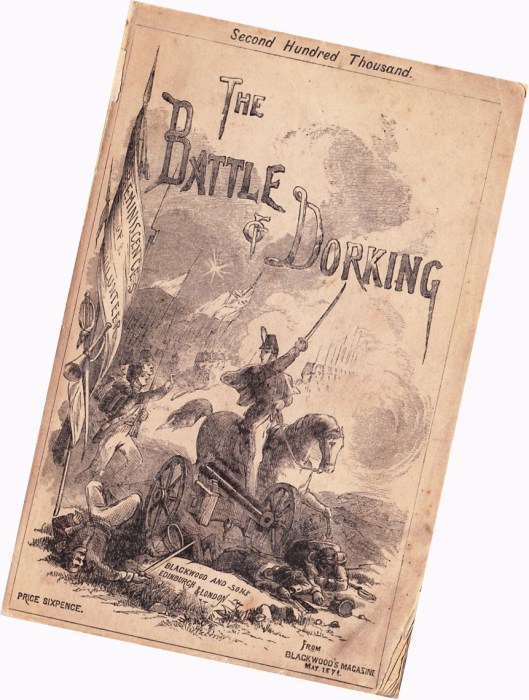 and then as a novel. 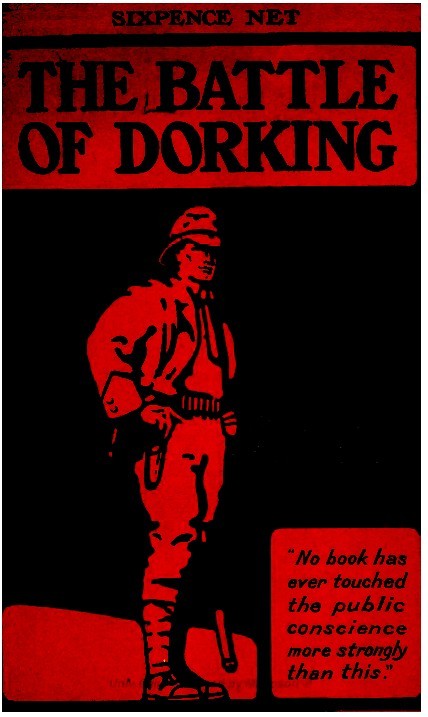 Dorking is a town to the south of London

and, in the story, the site of the climactic battle in which Britain is defeated by those same Germans who had so quickly defeated France. 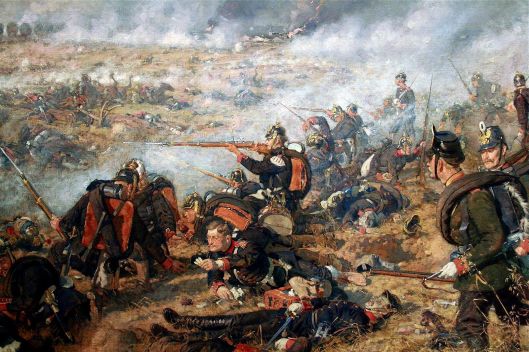 This never happened, of course, and Britain had suffered invasion jitters before—during the Napoleonic Wars, when the soldiers of Napoleon I sat at Boulogne and the emperor planned an attack

and at the beginning of the 1860s, when there was a fear that Napoleon III, nephew of Napoleon I, might be about to try his own version of his uncle’s plan. 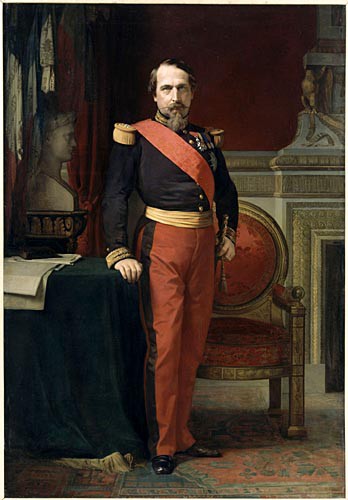 Somehow, however, the idea of a German invasion caught on and persisted, spawning a whole generation of such books, such as this, from 1897— 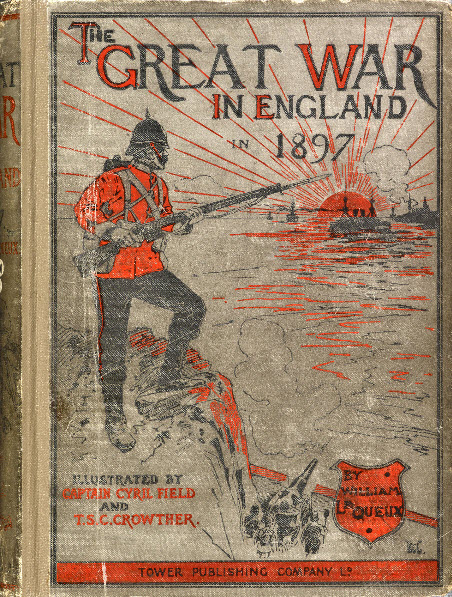 Not everyone believed in this, as this 1910 cartoon suggests— 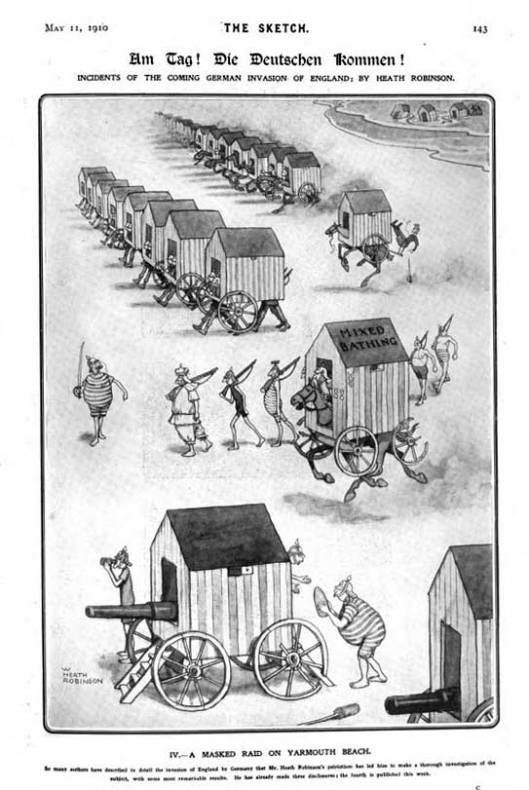 (Once the Victorian train network was in place, people went crazy for seaside visits in summer, but, for the more modest, that craziness did not extend to exposing themselves to public view while dipping in the sea.  The invention to save people’s modesty was this, a “bathing-machine”, as they were called. 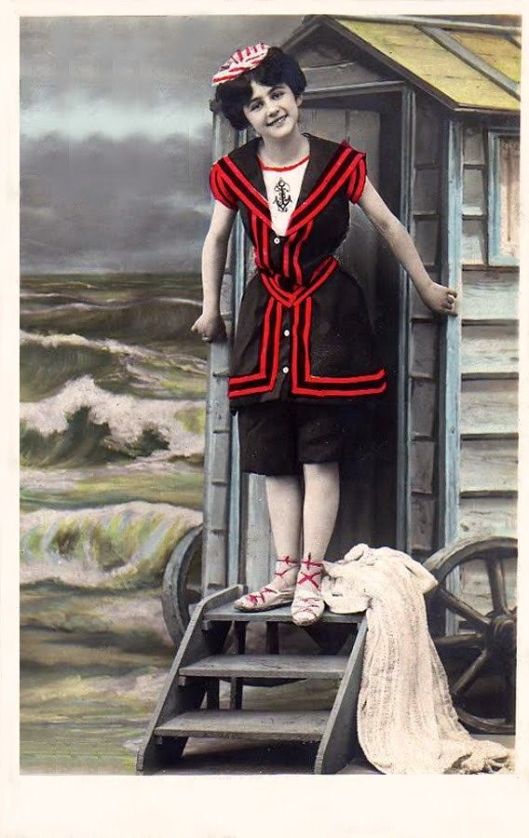 You climbed into this fully clothed at one end, changed into bathing attire (still ridiculously overmodest by modern standards), then, when attendants had rolled the device into the water, you stepped out into the water (presumably up to your neck, to continue to preserve your modesty), splashed about, then climbed back in, were rolled back onto the beach while drying off and redressing, then stepped out again with, at most, damp hair to show that you’d been in the sea at all.  The obvious joke here is that the German invaders would be landed somehow in the ocean already in bathing dress, then climb into bathing machines to disguise the attack they would then launch on the beach.  This cartoon is by W. Heath Robinson (1872-1944), who was popular then and beyond for the wackily improbable inventions he regularly contributed to the press.)

In that same year of 1897, however, one author took the idea of invasion in a somewhat different direction.  First appearing that year in serial form in Pearson’s Magazine, 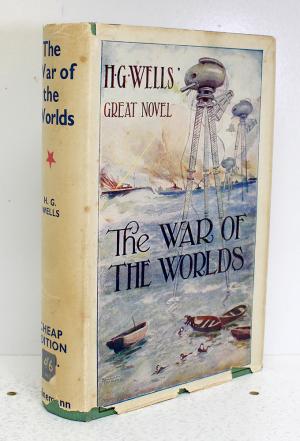 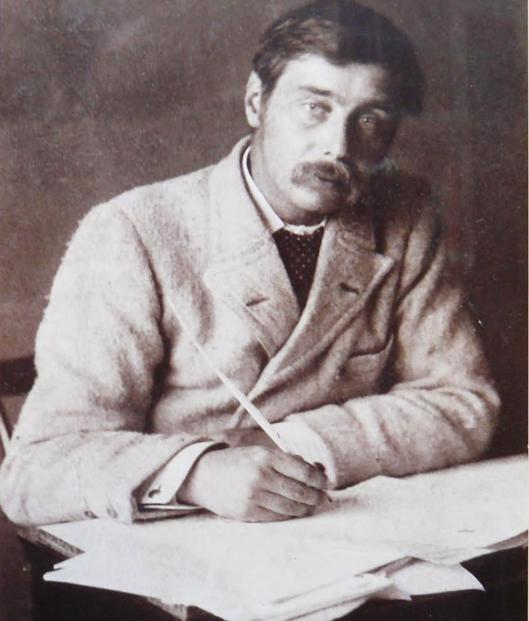 The War of the Worlds.

The idea that Mars might be able to support life—or had supported life—was popularized with advances in the development of telescopes, brought about in part by a mistranslation.  In 1877, the Italian astronomer, Giovanni Schiaparelli (1835-1910), 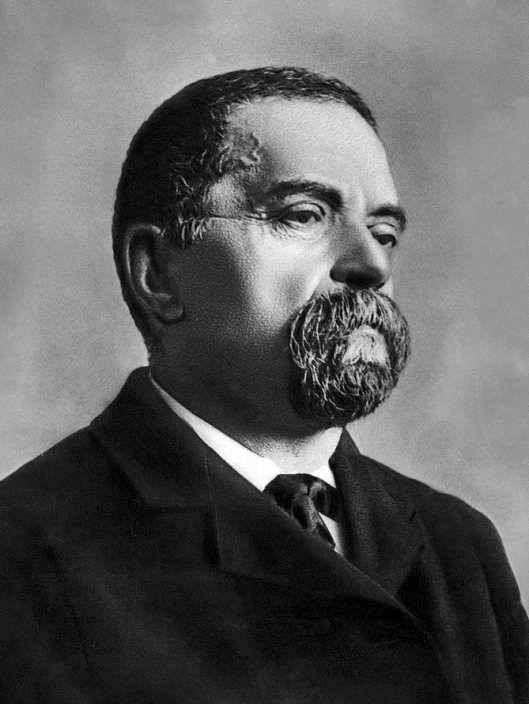 had observed on Mars what he believed to be canali.  What he meant by this was “channels”, but, when the word appeared in English, it was soon (mistakenly) understood to be “canals” and, once one has canals, the next step is canal builders, 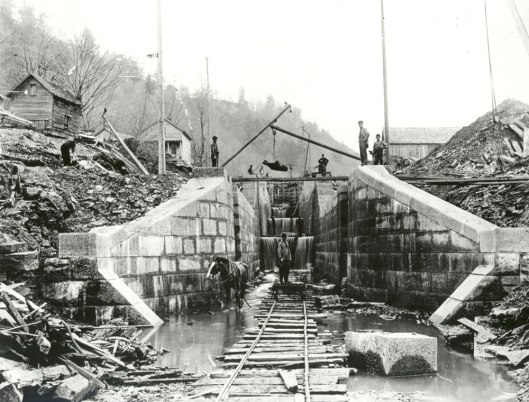 which quickly leads to the idea of civilizations and soon there were all sorts of speculation—including detailed maps—of who—or what—might inhabit the Red Planet. 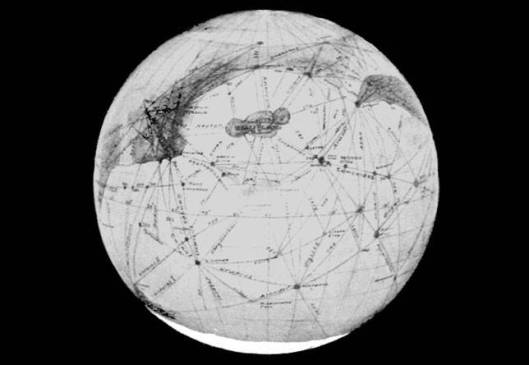 In his novel, Wells took this one step farther:  suppose those canals were drying up—what would a sophisticated civilization do?  One answer—and we can suppose that the rapid expansion of the still-new German empire, now attempting to become an international power,

along with what was now a quarter-century of invasion fiction (this is Louis Tracy’s 1896 novel on the subject—you can get your own copy at:  https://archive.org/details/finalwar00tracgoog/page/n13/mode/2up) 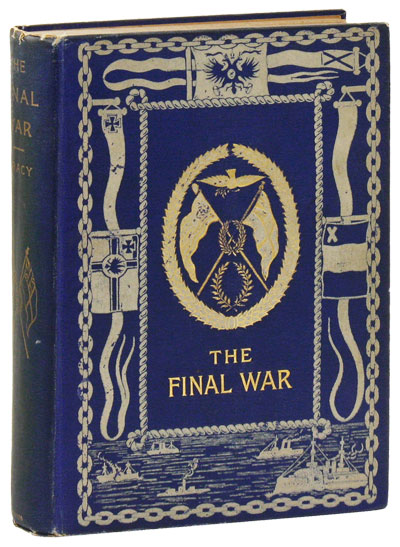 might have supplied some of his inspiration—was the invasion and conquest of a nearby planet, in this case, Earth.

Although Britain in 1897 was at its peak as a world manufacturing power, when confronted with the Martians and their array of machines, 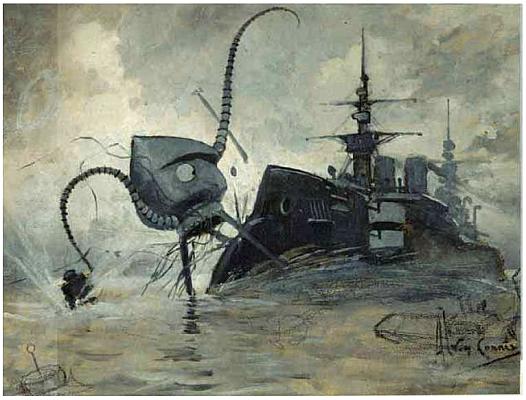 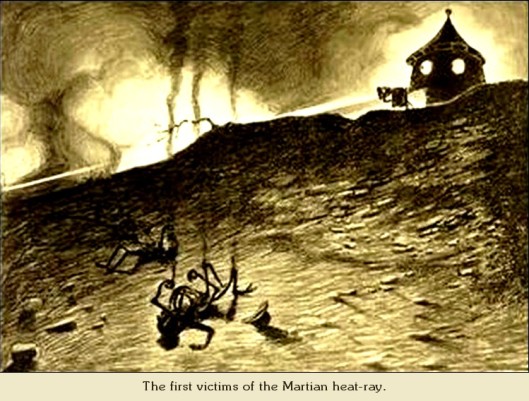 and “black smoke” (clearly a forerunner of the Great War’s poison gases), 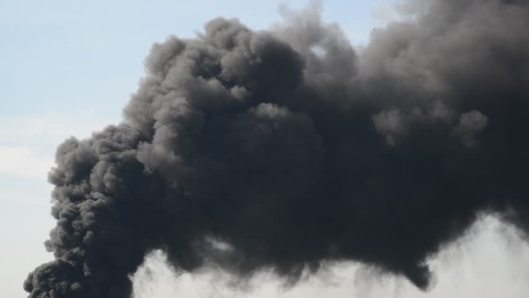 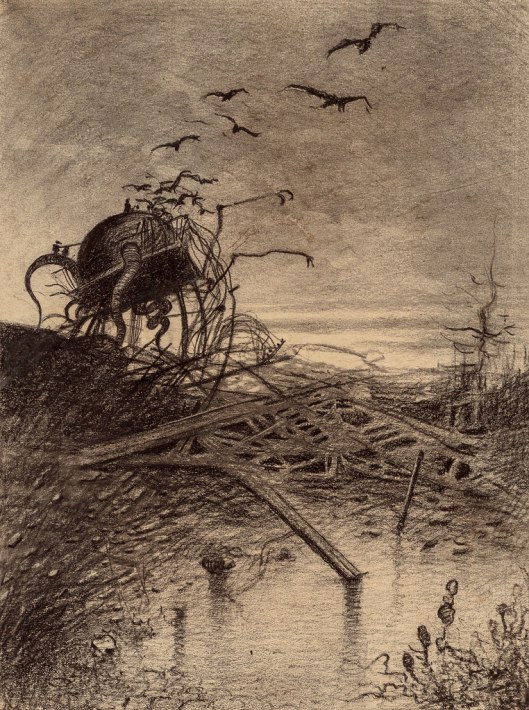 (This is an illustration by Henrique Correa from a 1906 French translation of the novel.) 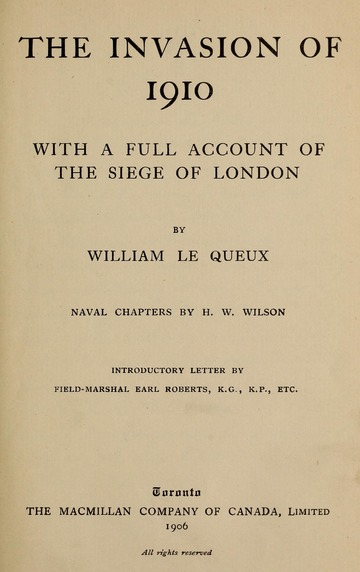 If we consider that all of this may have started at least in part because of the success of the Prussians and their allies in 1870, it doesn’t surprise us that Wells’ story should gain a new level of, if not popularity, then at least notoriety, in 1938.

Throughout the later 1930s, Hitler’s Germany, brought back from its total defeat in the Great War, was beginning to stir again on the international stage.  On March, 12, 1938, its Eighth Army invaded Austria 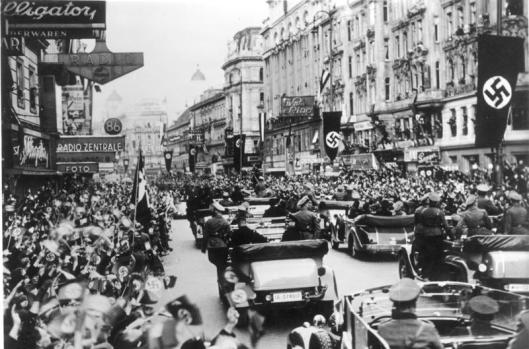 and, on March 15, its Third Army invaded Czechoslovakia. 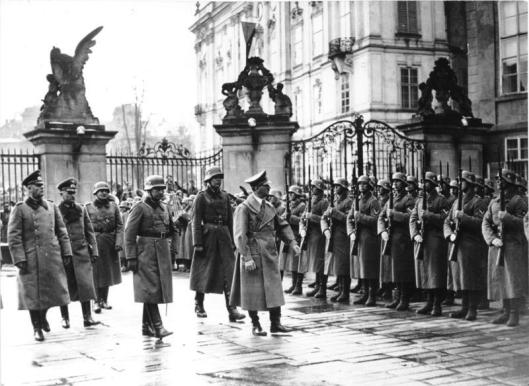 Although some of the Western allies had signed a kind of peace agreement with Hitler at the end of September, 1938, one can only believe that the uneasiness was still strong:  could Hitler be trusted when he seemed determined to acquire more and more of central Europe?

Then, on October 30, 1938, at 8PM (Eastern Standard Time), the CBS broadcast network put on a version of The War of the Worlds dramatized for radio by another Wells, the young actor/director, Orson Wells. 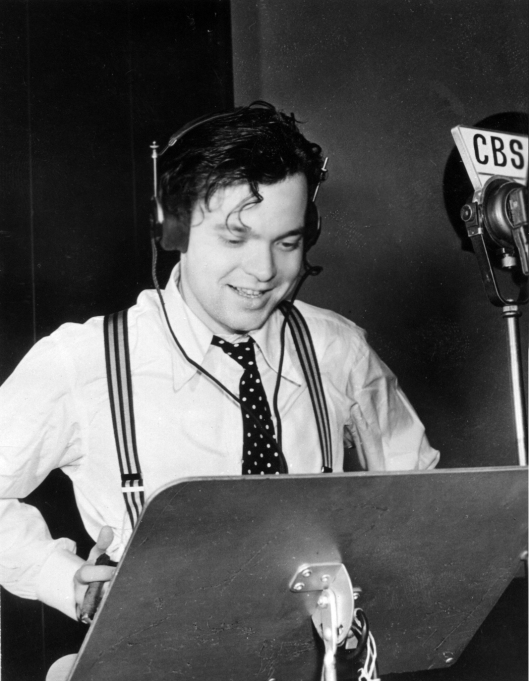 In his dramatization, Wells had updated the story to 1938, setting it around New York City, and turning it into an ordinary radio program interrupted by a series of bulletins about some sort of strange landings and subsequent events in nearby New Jersey.  Anyone who had tuned in at the opening knew, of course, that this was simply fiction.  Anyone who came in later—and seemingly many people did—had no idea and took it for the real thing:  an invasion, of the US, not by a European power, but by those Martians who had nearly conquered Britain in 1897—in fiction.  Needless to say, even in a pre-internet age, this turned into mad rumors and spread through the telephone network, frightening people across the entire country. 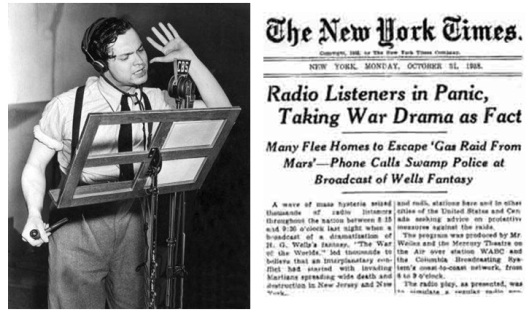 Calm returned fairly quickly, but it made us wonder:  with worldwide communication so much faster and easier in 2020, and in a world so prone to violence (alas!), what would happen now, should the fiction of HG Wells return in some new form to disturb us once more?

Thanks, as always, for reading and—barring a Martian invasion—

For your own copy of The Battle of Dorking, go to:  https://archive.org/details/battleofdorking00chesrich/page/n8/mode/2up

For a first-class website on such things as early invasion fiction, there’s:  http://www.theriddleofthesands.com/the-historical-background/