This posting is a little bonus because of the day, November 5th.

Because laws in the US tend at least to try to separate church and state, how do the people of Boston celebrate St. Patrick’s Day legally?

Easy– they dug into their history, and somebody remembered that during the American Revolution, the British abandoned their occupation of Boston on March 17th, 1776: St. Patrick’s Day.

The same is true when we follow those British soldiers home.

Samhain is the ancient Celtic holiday which celebrates that time of year between summer and winter. (Sam—in various forms, depending on which branch of Celtic you speak—means “summer” and its opposite is Gam). The Celts believed that, at that time, the doors between the worlds lay open and the dead could return.

In a Christian country like Britain, this would be rather an awkward holiday to celebrate without the same sort of adaptation the Bostonians used to celebrate St. Patrick’s Day. November 1st, All Saints’ Day, will cover some of this, but the clever British, just like the Bostonians, reached into their history and produced Guy Fawkes Day.

Guy Fawkes was, in fact, the leader of a group of Catholic gentlemen who wanted to block the succession of the Protestant James I to the throne of England.

To do this, they planned to blow up Parliament with the king and his court inside on the 5th of November, 1605. 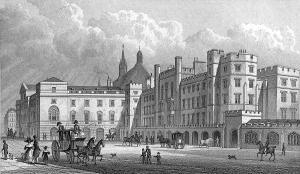 To do so, they managed, by using a building next door, to smuggle 3 dozen barrels of gunpowder into the basement of Parliament (and this is the old Parliament in Westminster palace, not the one we see today, which was built after the great fire of 1834).

Fawkes and the others were caught, however, and suffered a gruesome end as traitors: drawing and quartering.

So, if you want to have a pagan holiday under Christian auspices—and patriotic ones, at that, you can celebrate the end of Guy Fawkes, failed conspirator and Samhain favorite.

The older tradition in Britain was that children would put together a flammable dummy, called a “Guy” and take him around the neighborhood, begging for pennies under the slogans, “Penny for the Old Guy, Remember, Remember, the Fifth of November!”

These pennies then bought sweet and fireworks. On the evening of the 5th of November, the dummy would be set on fire, the fireworks would be set off, and the sweets consumed.

And so ancient holiday and political event could be blended and both survive.

But, although Guy Fawkes and the other conspirators might suffer horrible ends, no one was burned. There is, however, another Celtic tradition, reported by Julius Caesar. In his Gallic Wars, Caesar claimed that the priests of the Celts sacrificed victims by burning them alive in a huge woven figure. Perhaps the fiery death of the Old Guy is one more remembrance of Samhain-long-gone?