Last time, we looked at some works by Howard Pyle, the great 19th-century illustrator and painter. Today, we want to look at the work of one of his most prominent students, N.C. Wyeth.

To give you an idea of what captivates us, we could just show you this:

This sums it all up: the way in which reading allows you to step into imagination as if it were a country. It also suggests a certain propensity for romanic daydreaming on the part of certain people!

Here is an easy example of the difference between master and pupil. This is a Howard Pyle from his version of King Arthur. It’s beautifully detailed with a somewhat hard edge to it.

And here is a work by his pupil from his King Arthur:

There is an almost dream-like cloudy quality to his work. In fact, that dream can even seem something like a nightmare in this Wyeth illustration from Kidnapped. 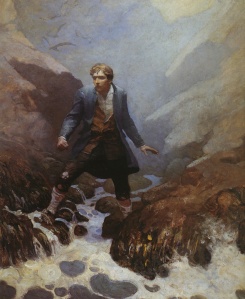 We’ve read that there are those who have criticized such works as “melodramatic”, but we think that that misses the point– they aren’t melodramatic, they are simply dramatic.

But, for us, it truly is the case of picture = words x 1000. And so, we’ll content ourselves with showing you a few more of our favorite pictures. 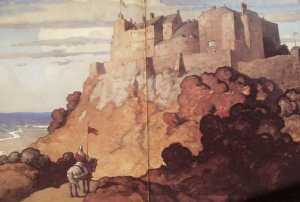 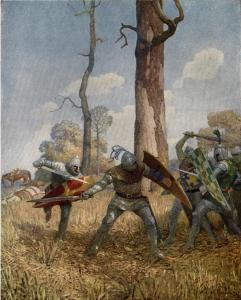 This last one, for us, may be as suggestive as the first one. We can feel ourselves deep in the beechwood behind the next tree, our bows creaking with the strain, waiting for the Sheriff of Nottingham.

And, for this time, we invite you, dear readers, to join us there.

1 thought on “From Master to Pupil”