If someone says the word “trophy”, does an image like this spring into your mind?

If so, we wouldn’t be surprised:  these and many similar objects are what we now call by that name.

Once, though, the word had a very different meaning, a much darker meaning than a sporting victory—although it did involve victory.

Battles fought in historical times in ancient Greece were not of the sort you might read about in the Iliad, where, often, warriors square off and challenge each other, sometimes even indulging in menacing speeches before attacking each other.

Instead, in the period between, say, 700 and 400BC, armored men, called hoplites

after their broad shields,

fought in a dense group, called a phalanx.

Each side formed up into one of these and the two sides then collided and the battle consisted of stabbing, pushing, and shoving until one side managed to break open the other side’s formation.

This was the turning point of the struggle.  Once the phalanx was broken, that side’s choices were limited:  usually, to fight to the death, or to drop that shield—three feet (about 1 metre) wide, it was thought an incumbrance if a getaway was planned—and run.  The Greek poet, Archilochus, who lived in the middle of the 7th century BC and whose unit appears to have suffered defeat at the hands of Saians, a people of Thrace, in northeastern Greece, seems almost proud to have done this:

“On the one hand, some man of the Saians is happy with a shield,

A decent one, which, unwillingly, I left by a bush,

On the other hand, I saved myself.  What do I care about that shield?

When the enemy was dead or fled, the victors would mark the spot on the battlefield where that turning point had taken place.  The ancient Greek verb “to put to flight” was trepo (TREP-oh) and, on that spot, they would raise a kind of victory monument, which they called a tropaion (troh-PYE-on).  The earliest depiction we can locate so far is from the middle of the 4th century BC, from one of the carved panels of a hero-shrine (heroon—heh-ROE-on) in Lycia, in Asia Minor.

This is from a 19th-century engraving or early photograph, so it’s a bit fuzzy, but, basically, we hope that you can see that it’s a post on which the victors have hung armor, presumably taken from the bodies of the defeated enemy.

Either the Romans borrowed the custom, like so much else, from the Greeks, or came up with their own version, based upon the same idea:  commemorating a victory on the battlefield.

We have many more Roman images:  there appear to be lots of coins, for instance, which feature what the Romans called a tropaeum (troh-PYE-um)—which, clearly adapted from the Greek word, might suggest that the custom, as well as the word, came from the Greeks.  Here’s a coin with a tropaeum which dates from the brief dictatorship of Julius Caesar (44BC) and which shows what appears to be Gallic armor and several captives, reminding his fellow Romans that Caesar conquered the Celtic peoples of Gaul.

As you can see from this coin and from the previous modern illustration, the basis was rather like a kind of crude scarecrow:  an upright with a crosspiece, which would allow for the armor to be displayed in a more lifelike fashion.  Trajan’s (53-117AD) column, in Rome, provides us with an even more detailed illustration— 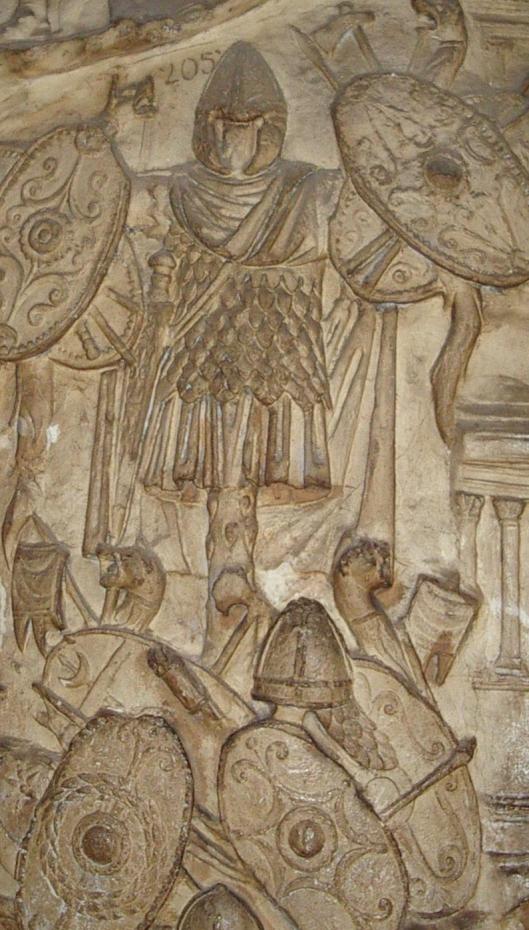 This column, which is extremely rich in imagery of a Roman army on campaign, c.100 AD, commemorates the emperor’s victories against the Dacians at the beginning of the second century.  For all that it is a victory monument, and although it depicts a tropaeum among its many images, it is not on a battlefield, but in downtown Rome, and so it is not, itself, a tropaeum.  Trajan did leave us one such, however, on or near the site of the battle of Adamclisi, fought in the winter of 101-102AD, in modern Romania.  It had fallen into ruin over the centuries, but was reconstructed in 1977.

Originally, there had only been an altar on the site, but, a few years after the final campaign, this splendid monument was erected.  This reconstruction is only one of several suggested, but we should point out that, somewhere, originally was placed a statue which would have reminded any Roman of the origins of this more sophisticated construction.  It is preserved in the site museum— 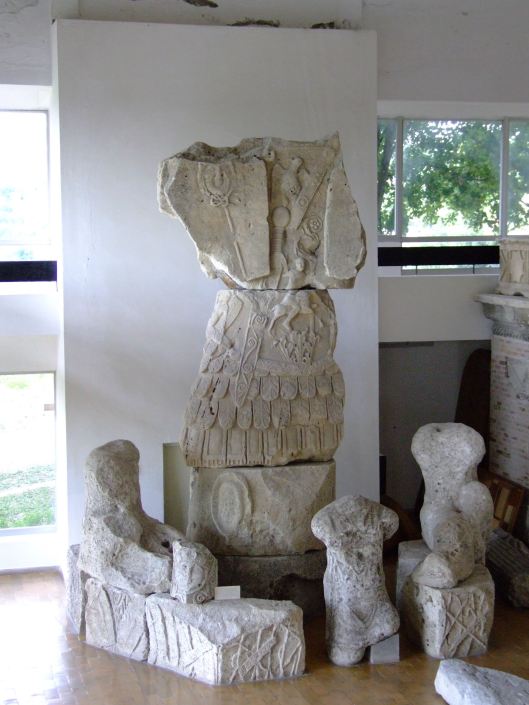 As you can see, it has that familiar shape:  upright with what appears to be a crosspiece, all covered in armor.

If we say that such things were placed on battlefields by both Greeks and Romans, what was the purpose or what were the purposes?  The Adamclisi tropaeum has a fragmentary inscription, which mostly gives us Trajan’s many names and titles, but also mentions the defeat of the Dacians and their allies, the Sarmatians.  It is dedicated to Mars, the Roman war god, which is not surprising,

It’s not just to Mars, however, but to Mars Ultor, “Mars the Avenger” (no—not one of those Avengers)

and this makes us wonder what message was being sent by such a monument at such a place.  Obviously, at one level, it says:  we won—and you ran away—or you should have–but you left valuable things behind.  After all, armor and weapons were all hand-made, and, even if Archilochus pretended to be indifferent to the loss of his shield, someone had to make another, cutting the boards, gluing them together, covering the outside with a shell of bronze— 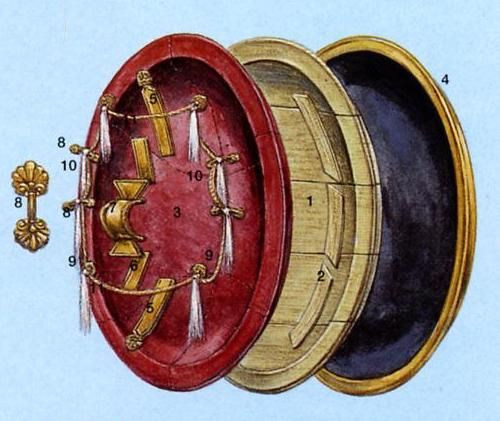 certainly medieval people knew the value of what was left on a battlefield, as the lowest band illustration from the Bayeux Tapestry here clearly displays.

At another level, it looks like it might be a thank offering to a god—in the case of the Adamclisi tropaeum, Mars.

At a third level, two things interest us:  first, it might be that the basic shape—that of a stretched-out man—was simply an easy way to hang up armor and helmets.  Then again, we were reminded of the Assyrians and the display they left outside captured towns, as a warning about the consequences of resisting them

Vlad, the 15th-century border lord who provided Bram Stoker with inspiration for his Dracula, was nicknamed tepes  (TEH-pets) “impaler”, for doing the same thing to prisoners.

Secondly, remembering the Ultor in the Adamclisi inscription, we wonder if such things, besides commemoration, possible mockery, and a thank-you to the divine, might have one more use:  as a warning, especially if, before that basic shape, an actual enemy warrior—dead—or perhaps alive? was set up, as if to say:  invade our land and this is what will happen to you and to all of your fellow soldiers, too.  Mars (in the form of our spears) will avenge your attack.

With that in mind, we remembered a scene in The Lord of the Rings:

“At last as the afternoon was waning they came to the eaves of the forest, and in an open glade among the first trees they found the place of the great burning:  the ashes were still hot and smoking.  Beside it was a great pile of helms and mail, cloven shields, and broken swords, bows and darts and other gear of war.  Upon a stake in the middle was set a great goblin head; upon its shattered helm the white badge could still be seen.”  (The Two Towers, Book Three, Chapter 2, “The Riders of Rohan”)

And what was the message of that head, we wonder?

As ever, thanks for reading.  Stay well and know that there’s