Welcome, as ever, dear readers.  We hope that you are well and happy in what, unless we make it otherwise, can be a gloomy time.

Our title this time is a kind of hope, based upon our subject, which is about one of our favorite fairy tales, Hans Christian Andersen’s (1805-1875) 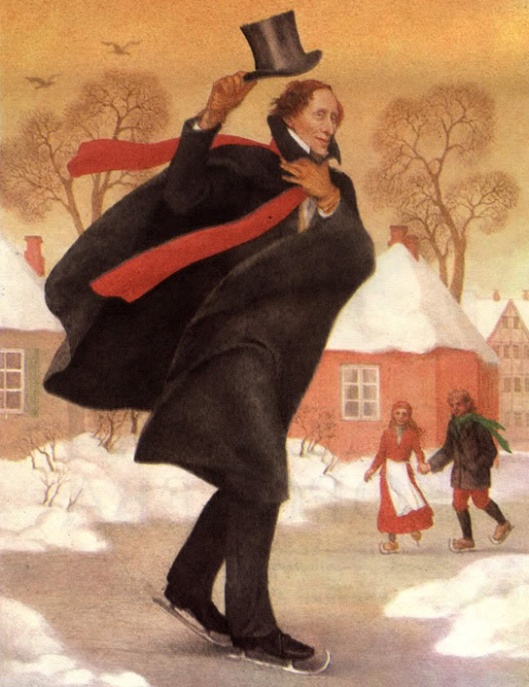 “The Tinderbox” (Fyrtoget, in Danish, which looks like it actually means “fire tinder”—more about “tinder” below).

(This image of HCA comes from a very interesting website, which we’ve just recently discovered.  Here’s a LINK, if you’d like to investigate it for yourself:  https://www.terriwindling.com/)

If you, like us, grew up in a world of safety matches, 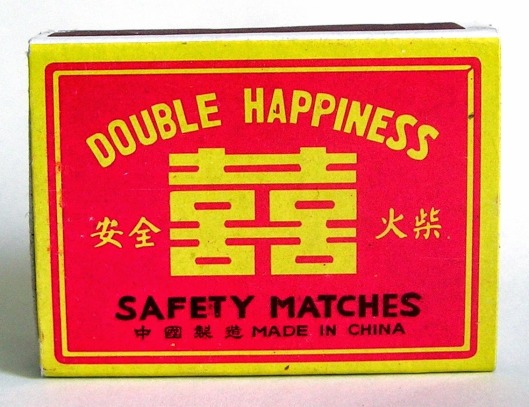 (We have no idea why these are called “Double Happiness”, by the way—perhaps because, 1. when you strike them against the box, they actually light; 2. when you try to light a fire with them, they don’t simply wink out immediately, as we have often had happen to us?)

a “tinderbox” is something from the very far past.  After all, friction matches have been with us since their invention, by John Walker, in 1826.  Before such became common—and probably, in much of the world long after—the way to light a fire was to strike a piece of flint with a piece of steel, 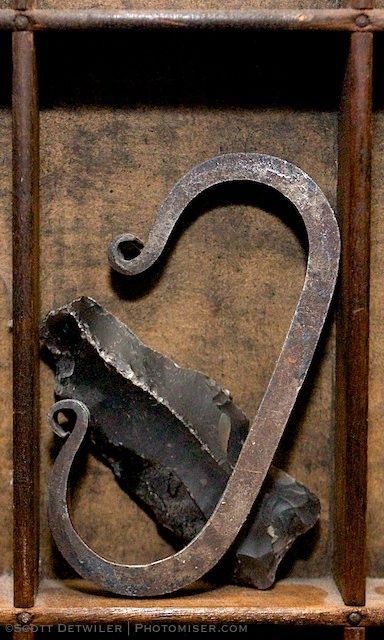 For handy carrying purposes, these two could be carried in a box, and, so that you always had something for the spark to set alight (and it could be any number of things, from moss to bits of fabric), you stuffed such things, called “tinder” (from the Old English verb tendan, “to kindle/alight/set alight”) into the box along with the flight and steel—and there was a “tinderbox”. 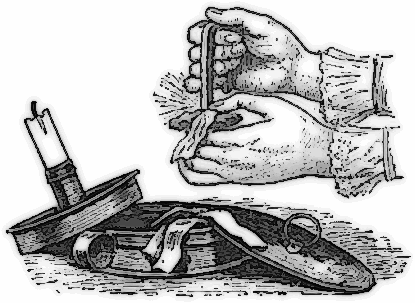 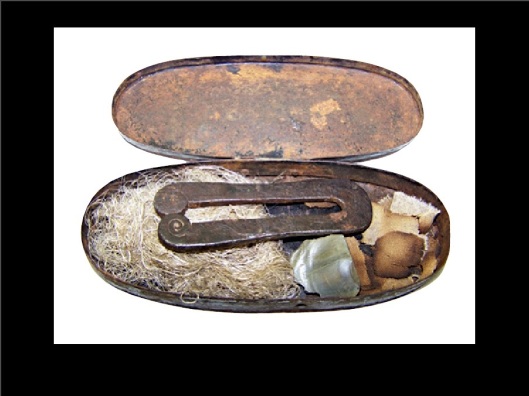 In the Andersen story, first published in 1836, when tinderboxes were still the method for lighting fires, the tinderbox is actually a magical one, as a soldier discovers, after he acquires one.  When he strikes a light once, twice, or three times, bigger and bigger dogs with bigger and bigger eyes appear and will fetch him anything he may wish. 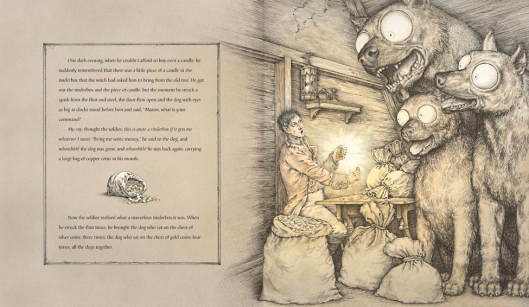 The soldier has discovered this wonderful device when he was lowered into a hollow tree by a witch—but, in this posting, we’re not going to discuss the story as story, rather, when we did a little image-searching, what caught our attention was the soldier himself—how he was dressed.  If you’re a regular reader, you’ll know that, along with the many other things we’ve taught and teach, we currently run a “History of Western Warfare” course and the look of soldiers through the ages interests us (as does dress in general).  We collected about two dozen images of the soldier hero from various tellings of the story and were interested to see the choices made for how he would be depicted.

First, however, how did the original author portray him?  What clues does he give us?  If we wanted a perfect picture, we would be disappointed, we’re afraid, as the details are few.  In the first paragraph, we are told that the soldier has a pack (tornyster) and a sabre (sabel).  A few paragraphs later, we are told that he fills his pockets (lommen) and then his kaskett, which, in modern Danish, means “hat/cap”, but we suspect, from the original French word, that, in 1836, this meant “shako”, a kind of tall, cylindrical military headgear, as the look of a Danish soldier then would have been something like this– 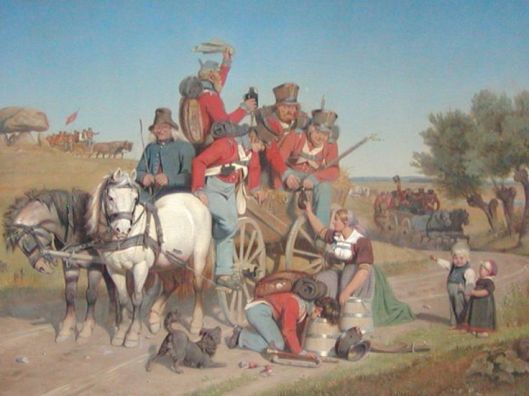 He also fills his boots (stovler).

So—HCA has told us that our soldier has (probably) a shako, a pack, something with pockets, boots, and he’s armed with a sabre.  As he has a pack, and he’s been walking along a country road, not riding, we assume that he’s an infantryman, and so that “sabre” is actually an infantry short sword (in French, sabre-briquet), which was rapidly disappearing from an infantryman’s weaponry by the time the story would have been written, but it would have looked like this—as still worn by a Danish Footguard today. 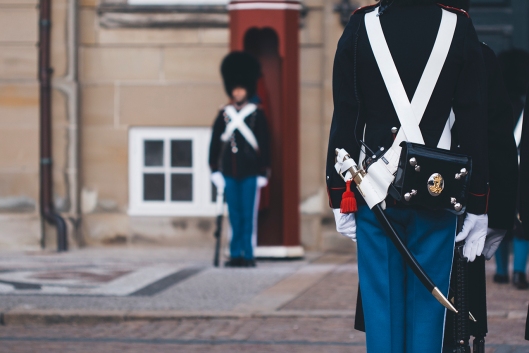 Now, let’s look at some images.  We thought that we would classify them not by publication date, but by period of dress, and the first one would be this— 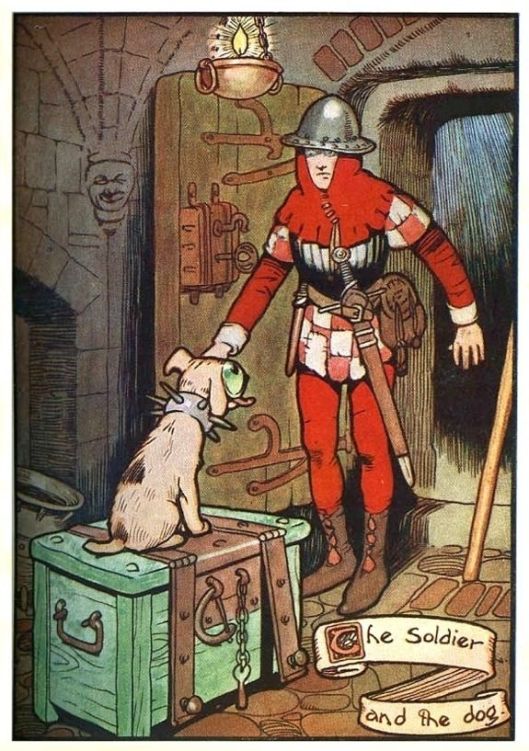 Here, we’re looking at a later-medieval infantryman, a bit like this one— 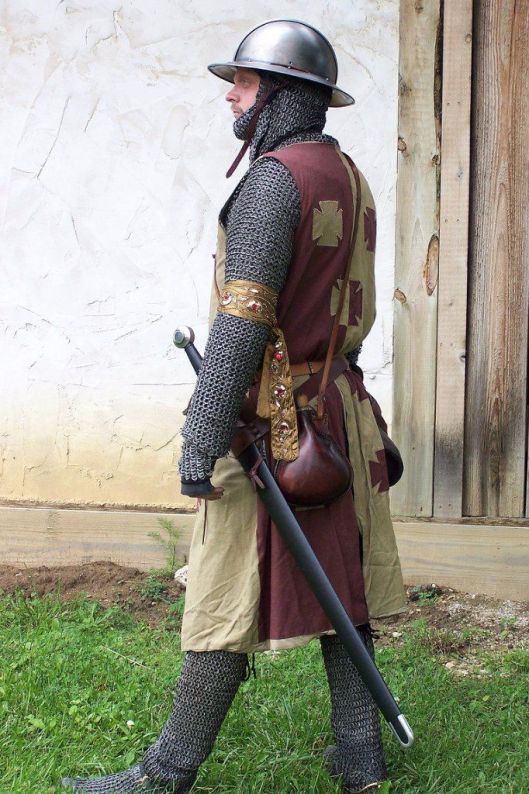 wearing a breastplate and the distinctive “kettle helmet”.  No shako, pack, pockets, short sword, or boots.  It almost makes us wonder if the illustrator had actually read the story! 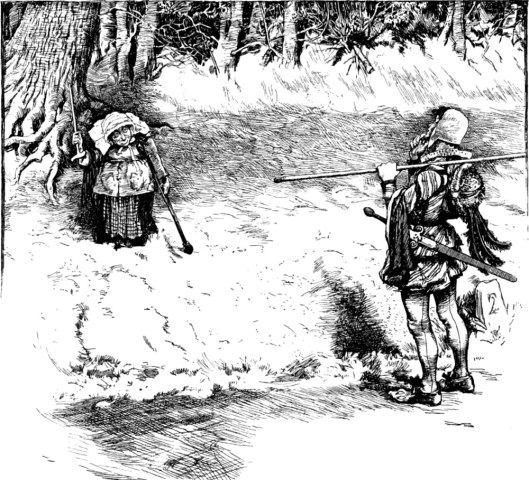 By his clothing, we’ve moved forward a couple of centuries, this being an early-16th-century landsknecht, 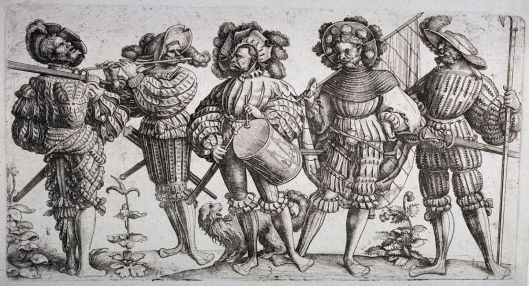 Again—everything the author mentions seems to be missing.  We admire the art of it, but, again, has the artist spent any time with the text?

Our next illustration just seems very odd—the soldier appears to have turned into an early-17th-century musketeer—or perhaps it’s puss-in-boots? 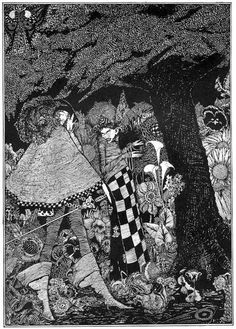 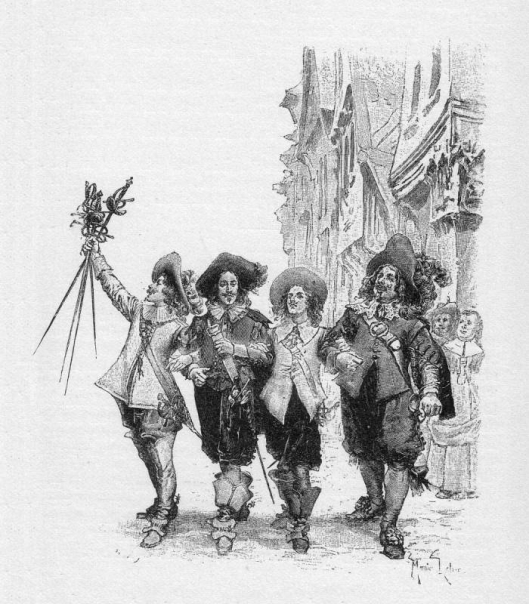 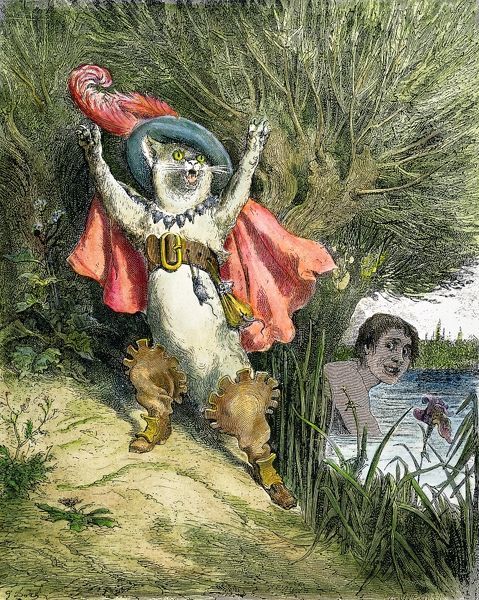 We certainly don’t want to suggest in our little review that there is only one way to illustrate a story.  When it comes to Tolkien, for instance, we admire a wide variety of artists, from the first great illustrators, the Hildebrandts, 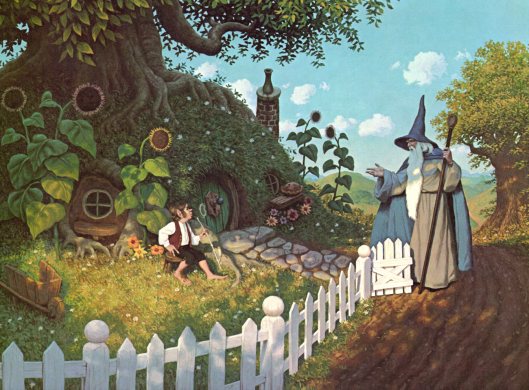 to the wonderful work of Ted Nasmith 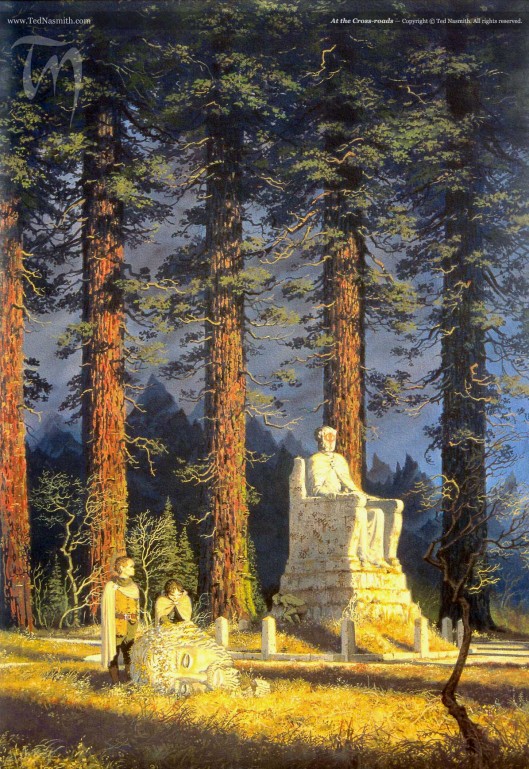 to many others, including Lee, Howe, and Gordeev—and there are, indeed, many, and who knows who else is out there?  Our personal preference—and maybe this makes us a little old-fashioned—is for those illustrations which stick closest to what we understand Tolkien was presenting to us and we feel the same about HCA’s (fragmentary) description.  For example, here’s what appears, by its style, to be a later-19th-century depiction of the first meeting of the witch and the soldier— 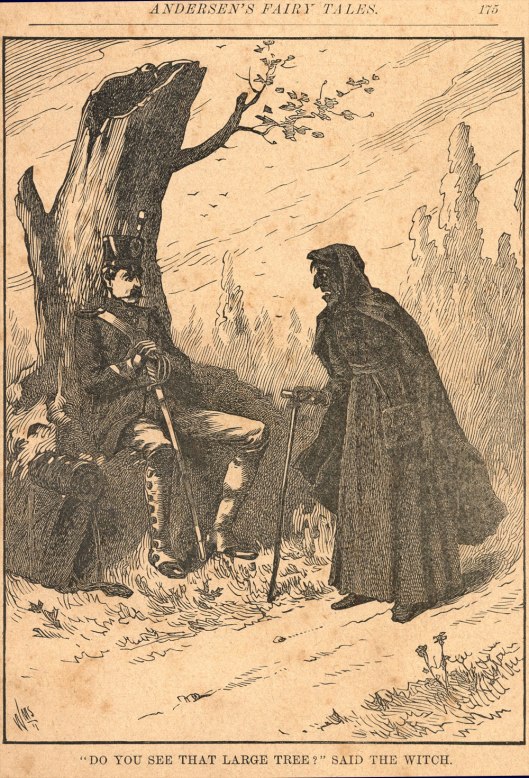 Here you see the shako, the pack, and, in this case, what appears to be a literal (cavalry) sabre.   Even more convincing—and we’ll stress, to us—is this 2007 view.  (This is Stephen Mitchell’s version, illustrated by Bagram Ibatoulline) 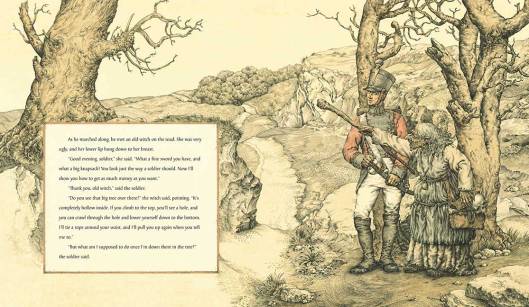 As we said, we found about two dozen different illustrations, and those were just of the soldier and the witch.  For fun, go to your usual image search engine and see what you find that pleases you:  hopefully, we have kindled a little flame of interest with this posting?

If you don’t have a copy of “The Tinderbox” at hand, here’s a LINK to a translation:  https://www.andersenstories.com/en/andersen_fairy-tales/the_tinderbox

The same site gave us the Danish original and we apologize to any Danish reader for any mistakes made, being only beginners in that excellent language!